‘Triumph of Love’ follows the difficult path to love 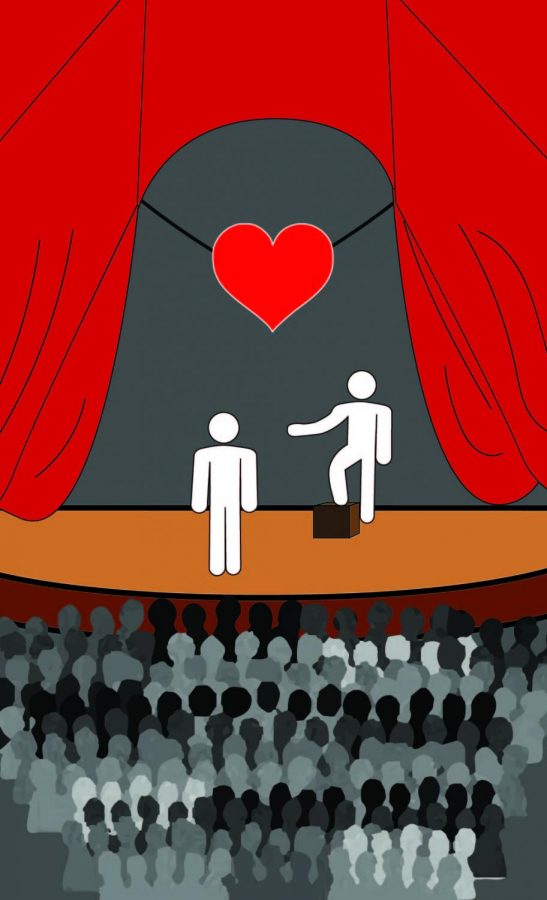 A story about love and reason that brings a comedic musical to life on stage of Princess Leonide who will do anything for love is coming to Whitewater.

“Triumph of Love” will open on Feb. 26 at 7:30 p.m. to students and community members. The shows will continue through March 1, and its last show will be on March 2 at 2:30 p.m. in Barnett Theatre in the Greenhill Center of the Arts.

The musical first premiered on Broadway in 1997.

Nathan Broege, a senior at UW-Whitewater, is taking on the part of Hermocrates with other students at UW-Whitewater. They will take the stage to perform “Triumph of Love”, a comedy musical written in the 1730s that follows a “love maze that entraps everyone who comes in contact with the princess,” said Broege.

Broege has been involved with theatre since his sophomore year of high school, and one thing he enjoyed about this production is “the music is extremely catchy and beautiful, and the costume design and wig design is incredible to see,” said Broege.

Faith O’Reilly, who is currently a public relations major, plays the part of Corine, a clever and benevolent character who is the only character who sees the bigger picture. “Although she is not the main character she has a rather weighted influence on the events of the show,” O’Reilly said.

Corine is the princesses’ maid who helped the princess find accomplices to make the plan work.

With the princess having to present different personas to each person who has fallen in love with her, things can get quite messy, “It’s almost like a game of cat and mouse with these identities, you have to act a certain way to get a certain thing or response,” O’Reilly said. The different relationships are O’Reilly’s favorite aspect of the musical.

David Baker is a junior at Whitewater and currently a vocal performance major, he was introduced to theatre in 6th grade and has been participating in productions ever since.

Baker is playing the lead male role of Prince Agis, a prideful and arrogant student, who with a little help from Princess Leonide will be more relatable and compassionate.

“This musical sends a message of balance between intellect and passion that we should all carry through our lives. It challenges us to consider a relationship between the two in order to live better lives,” said Baker.

Baker said he really enjoyed this opportunity and said the cast he was able to work with are hardworking, dedicated and brilliant with open minds to direction. “There has been no limit to what we have been able to achieve so far,” said Baker on reflecting on his time spent with the cast.

“It definitely has quite a bit of suggestive humor and themes so you have been warned, but otherwise its rather light-hearted,” said O’Reilly about what to really expect when attending this musical.