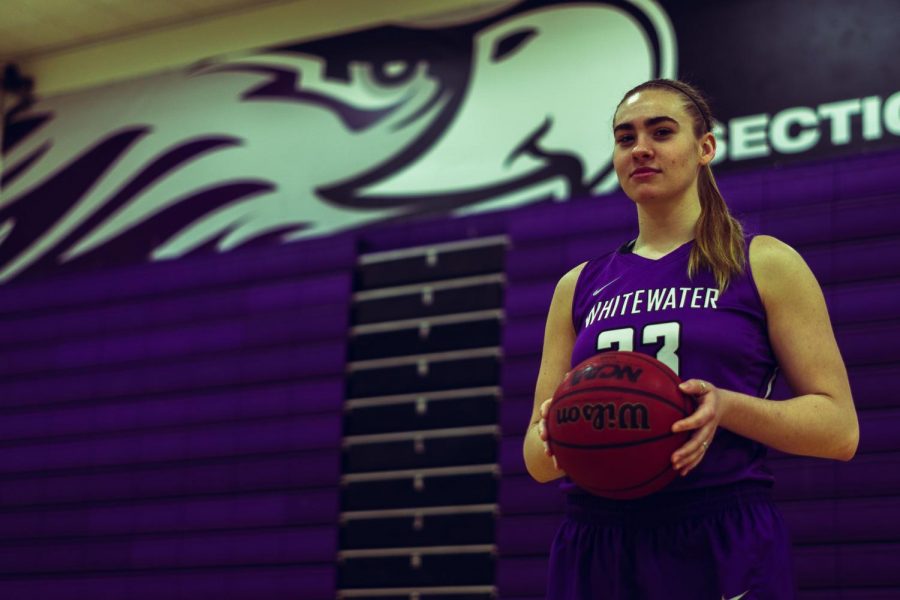 Each athlete has a different role when it comes to making a team.

Some are supporting members, some are starters, and a few are a rare breed.

Freckmann is from Milwaukee, Wisconsin, and attended Pius XI High School, where she participated in basketball, volleyball and track & field. She decided to attend UW-Whitewater for the beautiful campus and great reputation and is majoring in political science. Her career ambition is to be a United States Senator.

“Basketball honestly takes a lot out of you mentally and physically but the rewards it offers in return are definitely worth it and that’s not even the wins,” said Freckmann. “It’s the friendships and the character you gain out of it.”

Freckmann was named honorable mention for athlete of the week this season. She posted her fourth straight double-double with team highs of 15 points and 16 rebounds earlier this season against UW-Eau Claire, her second-highest total of the season She also became the ninth player in program history to reach 600 career rebounds in the game.

Her nine double-doubles this season are tied for the third-most in one season. She joins Vanessa Rieder and Cortney Kumerow as the only players to get such an accomplishment.

“I didn’t even know I was anywhere close to those numbers so finding out was such a nice surprise,” said Freckmann on her 600-point, 600 rebound record accomplishments. “I was impressed with myself.”

After getting herself in rare company, it only took Freckmann four days to set another personal record: she registered a career-high 27 points against UW-Stevens Point on the road.

Head coach Keri Carollo has been coaching Freckmann for the past four years here at UW-Whitewater, and understands how vital Freckmann has become to the Whitewater program.

“Olivia is just a tremendous leader on the court with not only her skill and ability to defend at guard or post and get rebounds but how great of a teammate she is,” said Carollo. “She is a really good person and hard worker. She epitomizes Warhawk basketball.”

During Freckmann’s collegiate career, she has been to the NCAA Tournament every year in her tenure here. She and the rest of the team hope to make it to the tournament and to make it as far as they can. With the success that the women’s team has had recently this season, they are very capable of reaching this goal.

“The past four years have been awesome playing with her,” said Vainisi. “The first game on the court, we all knew she was going to have a super successful career here which that she did. She scored 12 points as a freshman in her first game coming off the bench. It was awesome to see, and despite breaking her hand and getting a few stitches in her chin, she’s always gotten back up and come back stronger. She has such a positive influence on this program and it’s been awesome seeing her mold into the leader she is now since freshman year.”

“I think I learned how to handle different situations accordingly and be more mature,” said Freckmann. “I’d definitely attribute that to becoming a captain but also being on the team for four years and witnessing great leadership.”

Freckmann has proved for many years why she is an incredible athlete and a great leader on and off the court. The last stretch of Freckmann’s regular season career begins on the road to UW-Platteville and UW-River Falls.