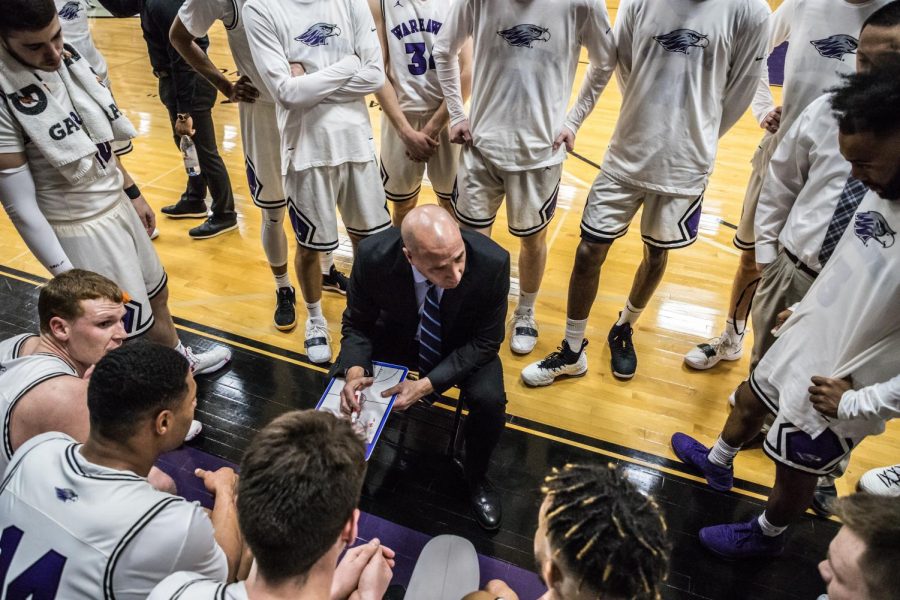 Following its road victory against UW-Stout, the Warhawk men’s basketball team clinched the sixth and final seed for next week’s WIAC tournament by winning both its home games against UW-Platteville and UW-River Falls.

The Warhawks end the regular season with a 17-8 overall record and a 6-8 conference record. Whitewater also finished with a 6-8 record in the WIAC last year and lost its first game of the conference tournament at River Falls.

“They have more left in them,” head coach Pat Miller said. “They’re playing well, they’re excited. I feel like they believe they’re better than what our record shows.”

Neither team was spectacular shooting from the floor, as the Pioneers shot 28 percent while the Warhawks shot 36 percent overall.

Whitewater went on a 13-5 run to start the second half and never lost the lead from there.

The Pioneers cut UW-W’s lead to 47-43 with three minutes remaining in regulation, but senior guard David Sachs’ 3-pointer swung the momentum right back to the home team.

Senior forward Melvin Brown Jr. essentially sealed the game with a layup with just over a minute left to give Whitewater a 52-44 advantage.

Brown Jr. led Whitewater’s scoring with 17 points on 7-of-14 shooting.

The Warhawks carried their momentum to the regular season finale against the Falcons and escaped Kachel Gymnasium with a 77-74 Senior Day win.

“I thought the last week and a half they bought in more than they have in any point during the season,” Miller said.

“I came in tonight making sure it’s not my last game,” Brown said. “These people accepted me the last four years, welcomed me with open arms. We haven’t been quite as successful as I wanted to, but I wouldn’t take it back.”

During the contest, Whitewater used opportunistic offense and disciplined defense in the first half to lead 46-32 at halftime.

The Falcons stepped up their defense in the second half and eventually tied it at 58 apiece with 8:26 to go.

But Brown’s midrange jumper on the following possession sparked a 12-2 Warhawk run. Junior center Riley Jensen proceeded to score eight straight points before Brown capped the run with a layup.

“He [Jensen] was taking advantage of the matchups and that’s a completely different role for him in a close game to be the guy we’re going to repeatedly, and he responded exceptionally well,” Miller said.

River Falls responded with a 7-1 run, but Sachs made UW-W’s last seven points all on free throws to clinch arguably the team’s most important win of the season.

“I think we were playing for the seniors today,” Jensen said. “Seeing how hard they work, seeing what they bring to the table every day in practice, and we just wanted to give back to them.”

Brown and Brown Jr. led UW-W’s scoring with 19 points apiece. Jensen registered 16 points going 7-of-8 from the field and had six rebounds.

The Warhawks will travel to Platteville for a first-round WIAC tournament matchup against the Pioneers Feb. 19.

“It’s the way we wanted to come into the conference tournament,” Brown said. “We don’t fear anybody. We’re ready to rock and roll.”