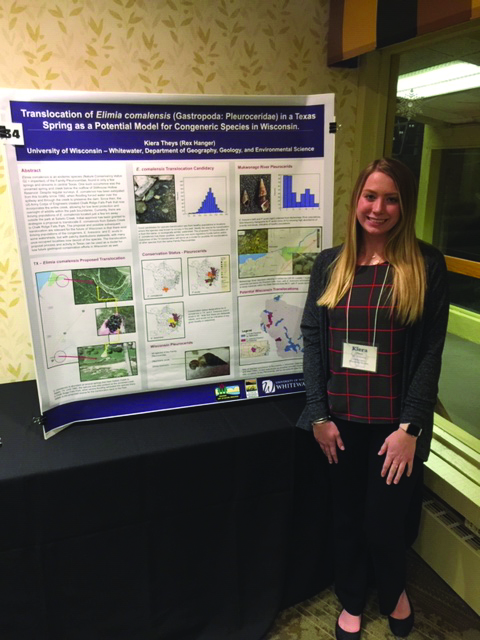 March was kicked off with the 43rd annual meeting of the American Water Resources Association (AWRA). From Feb. 28 to March 1, the AWRA Wisconsin section met at Lake Lawn Resort in Delavan, Wisconsin.

The University of Wisconsin-Whitewater was represented at this year’s meeting by professor Dr. Rex Hanger, professor Dr. Dale Splinter and student Kiera Theys. Each individual was given the opportunity to share a presentation on a concern within their studies, and Theys was able to share a portion of her research project at this conference.

Several hundred people attended the two-day convention, and this year’s theme was “Clearing the Waters: Effective Science and Communication”.

Hanger, a professor in the geology, geography and environmental sciences department at UW-W, gave a presentation on the utilization of snails and their effects on water quality. He also had the opportunity to include and elaborate on some of his own work that he has done with snails and research in the Mukwonago river, a significant location for these specific gastropods. Though they thrive here, they have been noted to fail in other areas throughout the country.

“Among living freshwater animals, they hold the highest extinction rates,” Hanger said. “We’re doing a number on these creatures.”

Splinter, another professor in the geology, geography and environmental science department at UW-W opted to give a presentation that circulated around streamflow trends and how they change across the state of Wisconsin.

“We’ll be seeing larger precipitation events occurring which can affect the amount of water in our streams, runoff, as well as an increased amount of emergency declarations,” Splinter noted.

Among these include forecasts for high magnitude floods as well as economic implications for future flooding.

Theys, a senior at UW-W, was also given the opportunity to present at the AWRA among approximately 40 others. Her presentation revolved around the idea of being proactive and translocating and repopulating the Elimia comalensis in various areas nationwide.

She stated that these two species are very abundant in the Mukwonago River, and moving them from the source location and relocating them around Wisconsin will help to regenerate the population of these snails significantly. Overall, Theys said she had a positive experience at the AWRA.

“I think my favorite thing about the conference was to get more insight from professionals about the numerous topics dealing with water,” Theys said. “I also think it was a great experience to show off the research I conducted with my professor in a professional manner and to get to network with others in the field.”