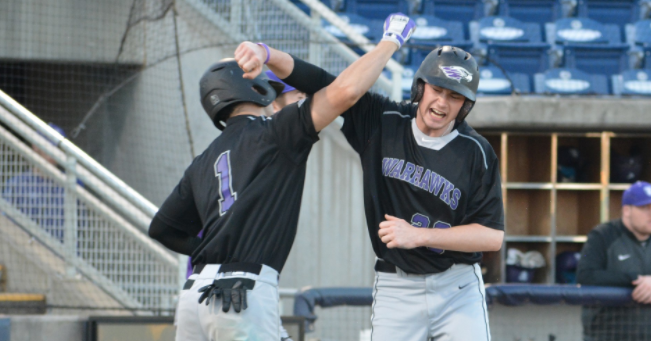 The No. 22 Warhawk baseball team started their regular season play on a high note after shutting out the College of St. Scholastica [Minn.] in their home-opening doubleheader at Prucha Field at James B. Miller Stadium March 30.

The Warhawks are now 7-5 overall, after winning 2-0 in the first game and 5-0 in the second game.

“We played well,” said head coach John Vodenlich. “We showed improvement and that’s what we are focused on right now.”

Senior pitcher Michael Kaska threw a four-hit shutout and collected 17 strikeouts in the first game, which was the second-most in one game in program history. The Saints left the bases loaded in the second and stranded two runners in the fifth, but Kaska stranded 10 baserunners, making his record 2-2 on the season.

“It is an unreal feeling,” said Kaska. “Knowing that my name will always be in the Warhawk baseball record book is something I’m extremely proud of. All of my hard work over the last four years paid off and I wouldn’t be where I am without the support of the coaches and my teammates.”

Senior centerfielder Alex Doud drove in senior third baseman Cal Aldridge, who was at third in the bottom of sixth, and freshman designated hitter Matt Korman hit a single to earn an RBI for junior first baseman Ben Wilkins in the seventh.

“Coming out strong for our home opener is always a must,” said Doud. “Every guy showed up ready to play and it all starts with our pitching. The guys on the bump pounded the strike zone and commanded the pace of the game as well.”

In the fifth inning of the first game, the Saints started off with a double and had the opportunity of scoring after having two players on base with two outs. Sophomore right fielder Bryan Sturdevant made a diving catch at the wall to keep the shutout alive for the Warhawks.

Doud, Wilkins and sophomore shortstop Nick Santoro each had two hits by leading the offense.

In game two, the Warhawks scored twice to take an early lead in the second and third innings. Sophomore Matt O’Sullivan struck out five, improving to 1-2 this season. Junior Riley Gruetzmacher had the final out of the inning and retired the side to complete the shutout on the day.

Santoro, Korman and Schrader all had two hits each, with Korman scoring twice. Wilkins and Korman scored on an error by St. Scholastica to make it a five-run advantage.

“With conference play starting next weekend, we all just need to prepare like we have been throughout the week of practice and continue to play our game,” said Kaska. “I’ll remember the feeling I had during this last game and hopefully repeat what was working for me throughout the rest of the season.”

The Warhawks will play both days this upcoming weekend in their first WIAC conference games against UW-Oshkosh at Miller Stadium. UW-W will play doubleheaders each day against one of its top conference rivals.