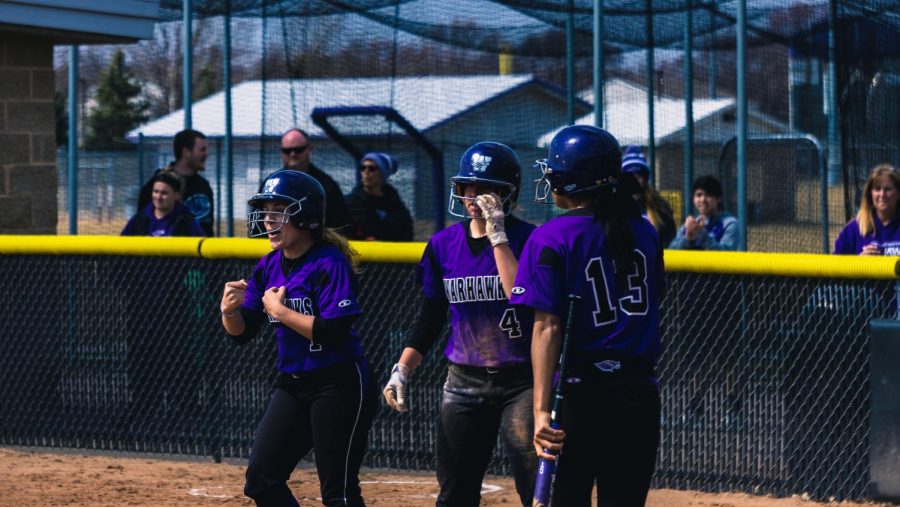 The Warhawk softball team took crisp offense and defense to new heights this past week by sweeping its two opponents by a combined score of 39-8.

The Warhawks won three of the four games by mercy rule.

UW-W defeated WIAC foe UW-Stevens Point on the road April 4 by scores of 12-2 and 8-3, respectively.

In game one, the Pointers gained an early 1-0 advantage, but the Warhawks erupted for sevenw runs in the second inning.

Whitewater led 8-2 heading into the sixth before tacking on four more runs. Junior third baseman Meg Cohrs hit a sacrifice fly to center field to secure the 10-run lead. The Pointers did not answer in their bottom half.

The Warhawks carried its consistent offense to game two by never trailing. Tied at two apiece heading into the third inning, Cohrs singled to left that scored senior center fielder Caitlin Catino, giving the lead back to Whitewater.

UW-W scored again on a Pointers error, which then senior second baseman Kelly Berglund followed up with a two-RBI double to blow the game open.

Whitewater led 8-2 after the third and surrendered just one more run in the fifth.

Senior right-hander Julia Camardo improved to 3-4 in UW-W’s sweep of the Pointers.

“We really hit the ball well at Stevens Point,” head coach Brenda Volk said. “Down in Florida, we didn’t hit very well. We had a couple of OK games but to have four games back-to-back-to-back and we really hit well, and I think that over anything whether it’s a conference school or not has helped us.”

Whether it was because their home-opener got delayed or not, the Warhawks appeared hungry and put on quite an opening-day show against the University of Chicago April 6 by winning scores of 10-2 and 9-1, respectively.

Matthias got herself out of an early-game jam in the first inning despite walking the first two Maroons batters.

Chicago’s Maeve Garvey launched a two-run homer in the top of the third to tie it, but the Warhawks answered with eight runs throughout the rest of the contest. Junior outfielder Sam Lattner, who pinch hit for sophomore left fielder Vera Pflugradt, hit a two-RBI double down the left field line to hand Whitewater the 10-2 victory in five innings.

Matthias improved to 5-1 on the year by allowing just four hits.

“I think that we all have our parts where we want to get better,” Matthias said. “I think that’s what makes us such a great team is that we each aren’t satisfied with anything, and each game, we know parts where we could improve on.”

The Warhawks scored the first six runs in game two against Chicago. Garvey hit her second home run of the day in the fourth inning to trim the Maroons’ deficit to 6-1.

But junior first baseman Mattie Klingenmeyer responded with a two-RBI single in the bottom half to give UW-W a comfortable seven-run advantage.

“It’s nice to see the people off the bench ready to go and produce for us,” Volk said.

Camardo allowed just five hits to get herself back to .500 pitching-wise.

“I think it’s really important to get ahead early,” junior catcher Nicole Neitzel said. “It’s easier for the defense then if we have a couple runs on the board, so that helps our confidence a lot.”

UW-W’s results against Carroll University April 7 were not available by press time. The Warhawks then have three more doubleheaders next week against UW-Oshkosh, Concordia University in their makeup games, and UW-River Falls.

“The main thing I tell the team is staying focused,” Volk said. “It’s not just assuming we’re going to go out and win because we have to work to win because everybody wants to beat us.”