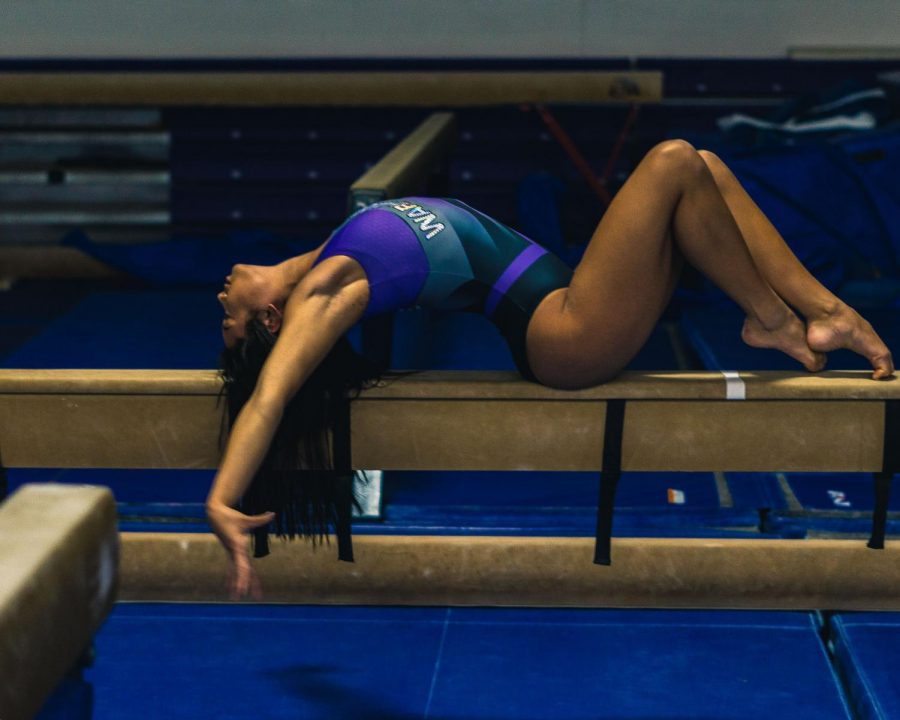 The old saying goes, “better late than never,” and Franchesca Hutton won a national championship at the right time.

Senior Franchesca Hutton from the Warhawk gymnastics team took home the national crown on the balance beam at the National Collegiate Gymnastics Association Championship hosted by UW- Oshkosh on March 23.

Hutton won her national title with a score of 9.775, the highest of her career and tied for the third-best in the program record book.

“The night was unreal,” said Hutton. “I’ve been to 3 other national championships and this one was like no other. I’ve always believed in myself and my abilities throughout my career, and I think that helped me have success at the right moment.”

She is from Shakopee, Minn., and attended Main Street School of Performing Arts where she participated in gymnastics in high school. Hutton is majoring in journalism.

Hutton has had a very successful career at UW-Whitewater. In 2016, she was the NCGA Championship qualifier on the balance beam. A year later, she tied for the No. 23 score all time in program history at UW- La Crosse on Feb. 24 and hit the season- high score of 9.675 on floor in the Warhawks’ win over UW- Oshkosh on Feb. 18 at the Williams Center.

In 2018, Hutton was named All-American on the balance beam and floor exercise, and eventually became WIAC champion on the beam.

“When she puts her mind to something, she does it,” said head coach Jennifer Regan. “She always gave 110 percent. She had all of the elements that you want to see in a national championship routine. That is sometimes hard to come about. She is the whole package. To finish on that high of a note is incredible.”

Hutton left her sophomore year to go live in Portugal with her family in the first semester. She had no intentions of coming back to the sport and had fully quit. About six months later, she realized she missed it and wanted to come back and compete for her team.

So, she returned to UW-Whitewater after months of no gymnastics. The closest she had to training was doing back handsprings in the grass fields of Portugal.

After she came back from Portugal, Hutton and the rest of her team won two national championships, and that revived her love for the sport.

She said it was such an incredible and irreplaceable experience.

“Going into my final routine as a Warhawk, I was just focusing on what I always focus on,” said Hutton. “My preparation was no different than normal. I am happy my allegiance to the sport and my teammates had finally paid off in that moment even though I was battling until the very last second. I will never forget that routine, and I am extremely grateful for the opportunities Whitewater has given me.”

Hutton has proved why she is an incredible gymnast and great leader.

Despite all of her personal and physical setbacks, she came back at the right time. And now, she is the top balance beam gymnast in all of Division III.