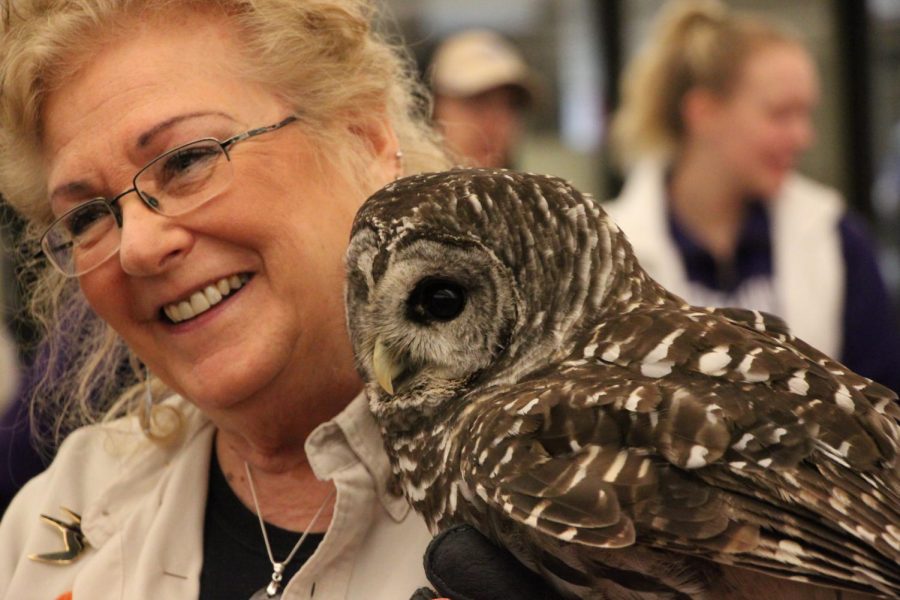 Earth Week received a warm and advanced welcome with the Birds of Prey event that was put on by the campus sustainability department as well as Science Outreach. Held in Anderson Library on April 18.

Those who attended were able to walk around several tables and learn about various species of birds, ranging from falcons to horned owls. There were several interactive exhibits present that allowed guests to obtain a better grasp and understanding of how these animals exist. Several free gifts were also given out to attendees such as buttons, pins, magnets, and various brochures on other similar events thrown by the Illinois Raptors Center.

A large feature of the event was the presence of several live birds and an informative session that was carried out by two handlers who work within a wildlife rehabilitation center.

“I’m very aware of what these birds can do,” avian handler Candy stated. “I’m aware of their strength and what they are capable of doing, and we sort of just coexist.”

Several birds were present for the event, including but not limited to a female Peregrine falcon, a female horned owl, and various breeds of smaller owls and hawks.

“I think it was a great opportunity to be available to the public. It opened my eyes to the possibilities of these animals,” Guest Jennifer Eddings spoke of the event.

There was also an informal question and answer session carried out by the handlers. This provided a great one-on-one opportunity for guests to become more educated about several of the bird species present, as well as their past history. Some of the birds present had been rehabilitated and were treated and raised after their trauma in captivity with a lot of human interaction.

“It’s so cool that these are wild animals that are able to coexist with humans after being used to the wild.” said visitor Parker Bouley.

The Illinois Raptors Center holds several similar events for the general public that are also free of charge. Dates and locations can be found through their website at Illinoisraptorcenter.org.