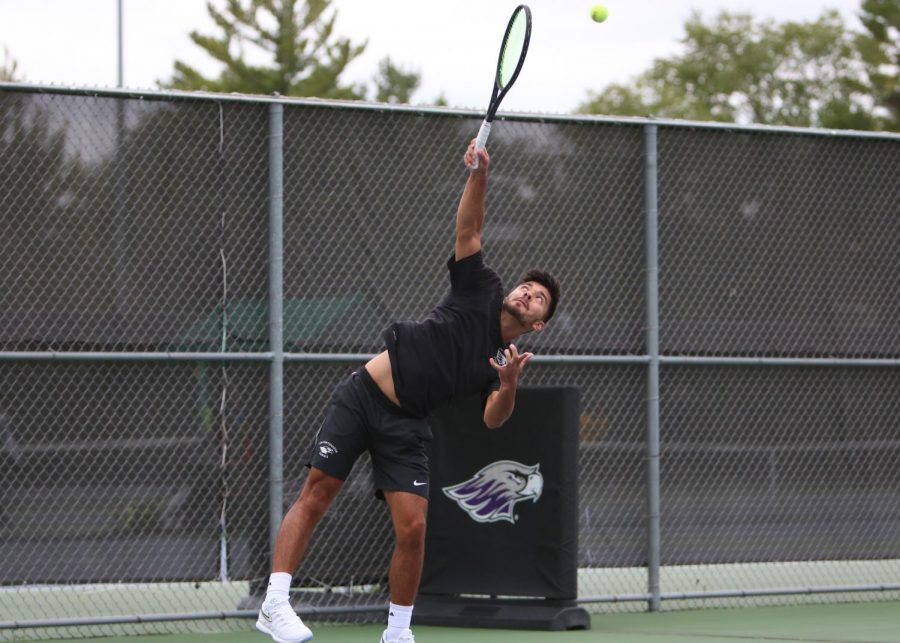 The Men’s tennis team hosted the Warhawk Fall Invitational tournament over the weekend. The tournament, which took place on Sept. 6 and 7, saw the Warhawks won the championship in  No. 3 doubles and take home second in the No. 2 doubles flight. The Warhawks didn’t see as much success on the singles side, other than taking 2nd place at No. 5 flight.

The tournament, which serves as a build-up to the ITA Regional Championships, was meant to help players to get more experience at the beginning of the season. Whitewater was also the smallest school at the tournament. They competed against two Division II schools and 3 NAIA schools.

“We’re the only DIII team here. The rest of the programs are all scholarship programs,” said head coach Frank Barnes. “It’s kinda nice to get good competition against scholarship schools.”

In particular, Cardinal Stritch University was one of the strongest opponents. “I think they were number 3 in the country for NAIA’s,” Barnes said of Strich.

Whitewater’s No. 1 singles player, Alex Gray, ran into Stritch in his first match.

He said, “I knew it was going to be a big challenge. Going into it I thought I was definitely going to be up to it, but when I got to the match, he just played really solid.”

Gray’s opponent, Nicola Wehrle, is a European who was just a step ahead of Gray the entire game.

Gray said,“There’s definitely an american style of tennis. Its big balls down the middle, and they’re usually a lot quieter. You play these guys from other countries and they play  completely different, and they act completely different on the court. Personally I enjoy it, i’ve never got to play anybody like it, it’s one of the things I enjoy about college tennis, playing all those different playing styles and seeing stuff you’ve never seen before and adapting to it.”

Barnes wasn’t disappointed by adverse results, but saw plenty of positives out of his top singles player, even against top competition like Wehrle. “These are all high level  kids who played international tennis growing up,” said Barnes.”My thought process is to get us really tough competition right out of the gates to prepare us for ITA’s.”

At this point in the season, everyone is just trying to get experience. Stritch’s coach, Mark Goldin is in the same boat.

“In the past we’ve had a lot of success at this tournament,” he said. “At this point in the season, it’s good competition, a good level for us to get where we need to be.”

Goldin also said, “Frank runs an awesome tournament here and we can get a ton of matches in, so it works out really well,” referring to Barnes. It seemed like most teams got what they came here for.

Final results are as follows: