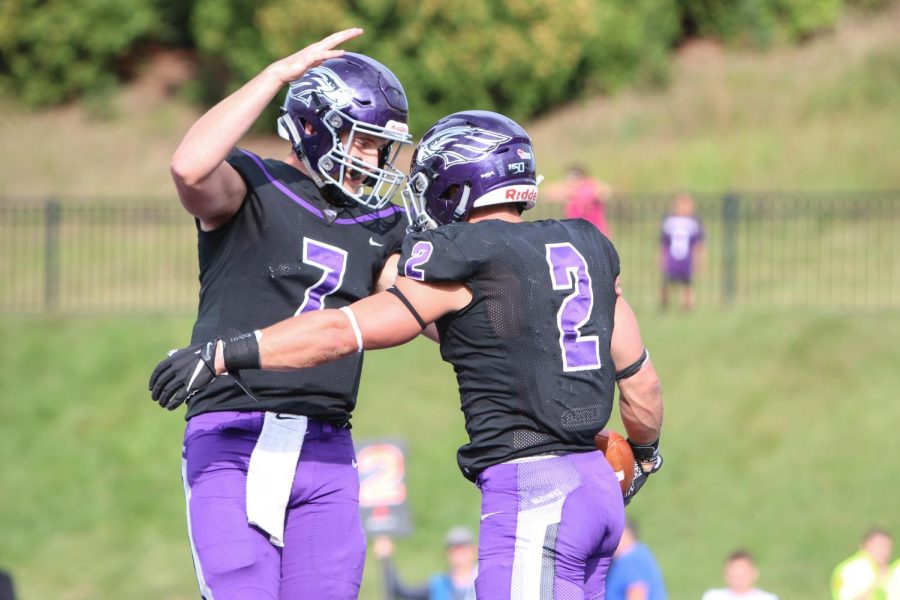 Quarterback, Max Meylor and Running Back, Ronny Ponick celebrate after a play at the Saturday, Sept. 7 game. The UW-Whitewater Warhawks dominated the University of Dubuque Spartans with a final score of 42 to 7. This marks the first game and Warhawk win of the season.

The Warhawk Football team took down Dubuque (Iowa) by a score of 42-7 on Saturday, Sept. 7 at Perkins Stadium, following a performance by Jesse McCartney as well as Senior Day festivities. The Warhawks (1-0) put together a dazzling debut defensive display, decimating Dubuque’s drives by daring them to drop back and throw. The Spartans (0-1) passed over the defense on one occasion, but were otherwise derailed.

To add intrigue, the two head coaches have a unique relationship.

“Kevin played for me, he was one of my players back in 1987,” said Dubuque’s Stan Zweifel.

“I broke my wrist the 3rd game of the season against UW-River Falls. I wasn’t able to play as well, and so Stan said hey well can you coach?” said Whitewater’s Kevin Bullis. “I ended up in coaching, because I broke my wrist. The plan was to be a high school history teacher and be a high school coach. I had never thought of being a college coach. Stan ultimately got me into coaching.”

The game opened with the Warhawks dominating the trenches. After a missed field goal on their first drive, Whitewater rushed for three touchdowns on the next four drives. Approaching halftime, the feeling at Perkins Stadium was that the Warhawks were running away with it.

“If I had to list the number one distraction to a team, it’s the scoreboard. The scoreboard is the biggest distraction.  I’ve said it, the veterans on our team know that it’s a reality,” said Bullis. “I do think there was a moment when the scoreboard distracted us in the 2nd quarter. I think we thought we were running away from it. I felt like we pulled our foot off the throttle a little bit.”

Dubuque’s coaching staff must’ve noticed something, because they dialed up a deep shot over the middle of the Warhawk defense on third and 10. The gamble paid off when junior WR A.J. Hunter split the coverage and hauled in a 40 yard touchdown pass, which brought the score to 21-7 going into halftime.

“We want to be a great run defense, and eliminate long passes. I brought up a negative because we gave up a long pass. That’s just not an option for us,” said Bullis. “I reminded them at halftime, eliminate your distractions.”

Coming out of halftime, Zweifel’s Spartans felt like they weren’t out of it.

“The biggest play in that game,” said Zweifel “was the touchdown on a third and 19 on their first possession in the third quarter which made it 28-7 which I think changed any momentum we had.”

He is referring to the 27-yard pass from Junior QB Zach Oles to Sophomore WR Tyler Holte that put the game out of reach for Dubuque. After that score, Whitewater was able to bring in some younger players.

Bullis said, “At this stage of the season, it’s not us running (the score) up on them, by no means. Its us trying to get our 2nds some repetitions to get better, and those guys took advantage of it. That’s exciting to me. When your 2nd defense can go out there and get a couple stops and your 2nd offense goes out there and puts the ball in the end zone.”

The Warhawks offense rushed for another touchdown and Oles threw for one more, making the final score 42-7 in favor of the Warhawks.

The expectations will only get higher as the season progresses. Next week, the Warhawks travel to Moorhead, Minn. to take on non-conference foe Concordia-Moorhead at 12 p.m.