Yoga, chai tea and the sunrise 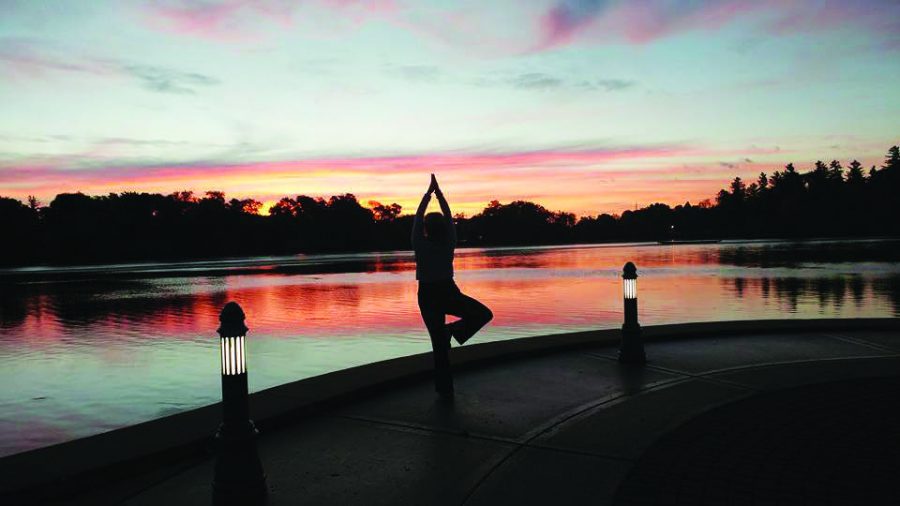 A woman practices and watches the sun rise over Cravath Lake during the morning yoga class.

Combining sunrises, hot chai tea and yoga sounds like a dream for any morning person.

And it was exactly this idea that led long-time yoga instructor Brienne Diebolt-Brown to create Sunrise Yoga.

The class meets every Monday, Tuesday, Thursday and Friday morning from 5:30 a.m. to 6:30 a.m. at downtown Cravath Lake so that attendees can start the day right.

“It’s early, but the sunrise is beautiful, and the chai is hot,” said Diebolt-Brown. “And you’re armed and ready to go as you face your day.”

As Diebolt-Brown goes into her third decade of teaching yoga, not only is she fully aware of the benefits of yoga any time of day, but also the expense of taking a class.

“I’ve taught at and managed a lot of studios, and one of the things that I learned over the years is that the overhead at a yoga studio is super-expensive,” said Diebolt-Brown.

“The rent, utilities, props, liability insurance, cleaning and paying of instructors costs a ton, so yoga studios have to charge $20 a class in order to keep the doors open. This means that only rich people with money to spare get to be healthy. It’s always rubbed me the wrong way.”

This idea of inclusivity is what lead Brown to make this class donations-only.

“It’s really wonderful to know that I’m offering something that anyone can afford,” said DieboltBrown. “And, I really mean it, that if you don’t have the money, you should show up anyway.”

For UW-Whitewater alumna, Therese Merkel, the class helped in more ways than physical – it also helped her mentally throughout her college career.

“In honesty, the class changed my life because it [one], made me into a morning person and [two], the kindness [B]rienne showed to me and all of her students helped me get through a tougher time in my college career,” said Merkel.

“Somedays I would wake up and be like, I’m not ready for today, but if you can drag yourself to the mat at the buttcrack of dawn, it’s awesome.”

For those not interested in waking up early, Diebolt-Brown also teaches a 10 a.m. gentle yoga class that is later, but is still just as impactful because of  Diebolt-Brown’s overall teaching methods.

“She’s an amazing teacher who offers the perfect balance of relaxation and challenge,” said Wimer.

“She also does an awesome job explaining the science behind poses and what they’re doing for your body. I’ve gotten so much mentally and physically stronger the past year.”

Those interested are welcome to join the Sunrise Yoga or Gentle Yoga classes.