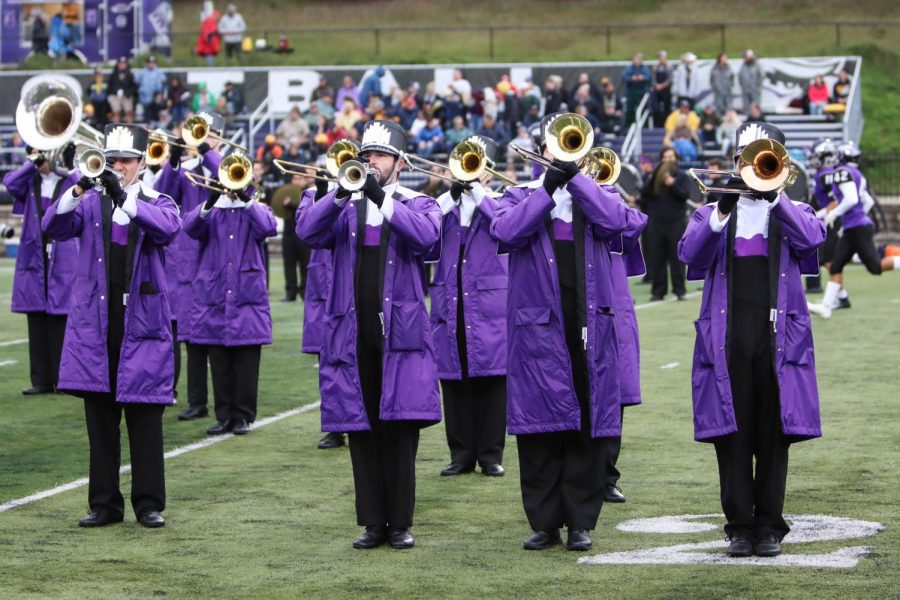 UW-Whitewater marching band performing during pre-game at the UW-Whitewater versus UW-Eau Claire Football game on Oct. 5.

The University of Wisconsin-Whitewater Marching Band, widely referred to as Wisconsin’s Finest, is a historic part of homecoming and the campus community as a whole. Each year, marching band performs in the homecoming parade as well as the football game.

One of the large, lasting impacts marching band has on its members is the family dynamic and bonds it helps to create. With all of the time they spend together, many marching band members find close friends within the performing group.

“I enjoy the group aspect of it,” said trumpet section leader Lily Freeman. “We work together as a unit and it’s up to everyone to make it work.”

Homecoming also serves as a reunion for alumni, allowing them to catch up and watch the current marching band members perform. Associate Director of Career and Leadership Development Jan Bilgen not only works for campus, but is a former member of UW-Whitewater’s marching band, having graduated from the University in 1989.

“When I was in marching band, the pine trees on the visitor side of the hill were five feet tall,” said Bilgen. “Now when I sit in the stadium, I look across the field and see how beautiful those trees are. It’s a good demonstration of growth.”

Whitewater’s marching band draws in both music majors and non-majors alike. One of the many music groups on campus, the band creates a safe haven for students to play their instruments and gain new performance experiences.

“What I like about the parade is that whenever we’re walking down the street, you can see the community being hyped,” said Communications major and clarinetist Iemorlice Thou. “It’s great being connected with the community with our music.”

The marching band has been a long-standing part of UW-Whitewater. While years may come and go, not much changes about the positive attitudes the band holds on to and the welcoming environment the members are a part of.

“Uniforms were different, it was smaller, but the feel with definitely the same,” said Bilgen. “There’s a natural affinity of people who love and create music. Bleeding purple was a bit part of it.”

The homecoming game is a major performance for the group, allowing for the students to play in front of a large crowd within Perkins Stadium. Many students who attend these football games and see the band perform are impressed by the performance put on by Wisconsin’s Finest.

“Every time I see the marching band perform I’m impressed,” said Junior Samantha Richter. “They have a high level of skill and are really good at pumping up the crowd.”

The UW-Whitewater marching band will be performing in the homecoming parade at 10 a.m. and football game at 2 p.m. on Saturday, Oct. 12.