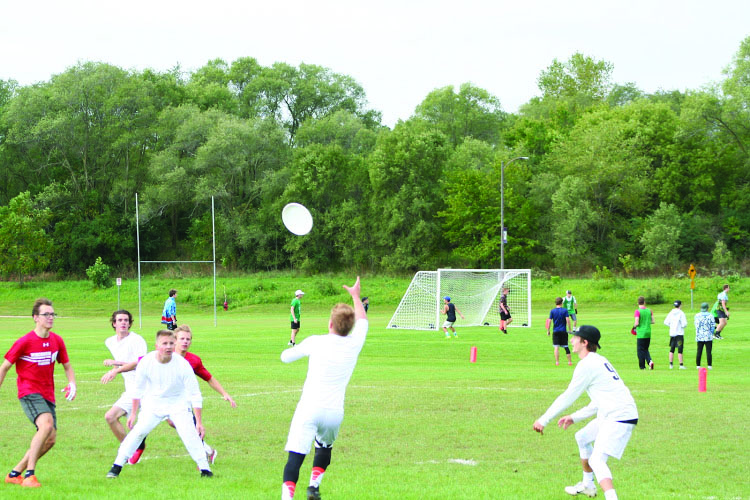 Members of the UW-Whitewater Club Ultimate Frisbee Team during a play.

The team separated into three teams for the tournament, along with an alumni team. The tournament also included the Milwaukee School of Engineering, University of Wisconsin-Milwaukee, and Marquette University.

To prepare for tournaments, the team practices Monday through Thursday for two hours. The first hour normally consists of throwing with a partner to warm up, stretching, and often a drill focused on an aspect of the game to teach new players or improve the team’s skills. The second hour is often set up for a scrimmage, with the team applying what they learned in the drills to improve their game.

The team has one common clear goal in mind. Nationals.

“For this season, the goal is always to get to Nationals. However, it’s quite tough getting back there as we play against D1 powerhouses like Madison and Minnesota in our region,” said team president Zach Ostermann.

The Ultimate Frisbee playing seasons are split between fall and spring. The fall season is a bit less competitive, with Goran saying the focus is more on development and team chemistry.

Spring is their competitive season, where USA Ultimate ranks teams based on tournaments. The fall season began with their home tournament, followed by four more. They’ve played all over the Midwest, including Illinois, Minnesota and Missouri.

The Ultimate team wants to start reaching out beyond the college campus as well.

“I want to set up good relationships between the team and various departments of UW-Whitewater and spread awareness for both our team and the sport to the area,” said vice president Nick Trent.

The team is currently working on setting up a clinic for high schoolers in the area and surrounding cities to get kids exposed to the sport.

“This is really important to me because I first started playing in the last semester of the senior year in high school and I fell in love with it,” said Trent. “I’ve played a variety of sports such as hockey, soccer, lacrosse, and track but I don’t enjoy any of them as much as I enjoy Ultimate.”

The team is currently prepping for their next tournament, No Wisconsoquenses, held in Hartland, Wisconsin on October 12 and 13. More information can be found on the Intramural and Club Sports website.