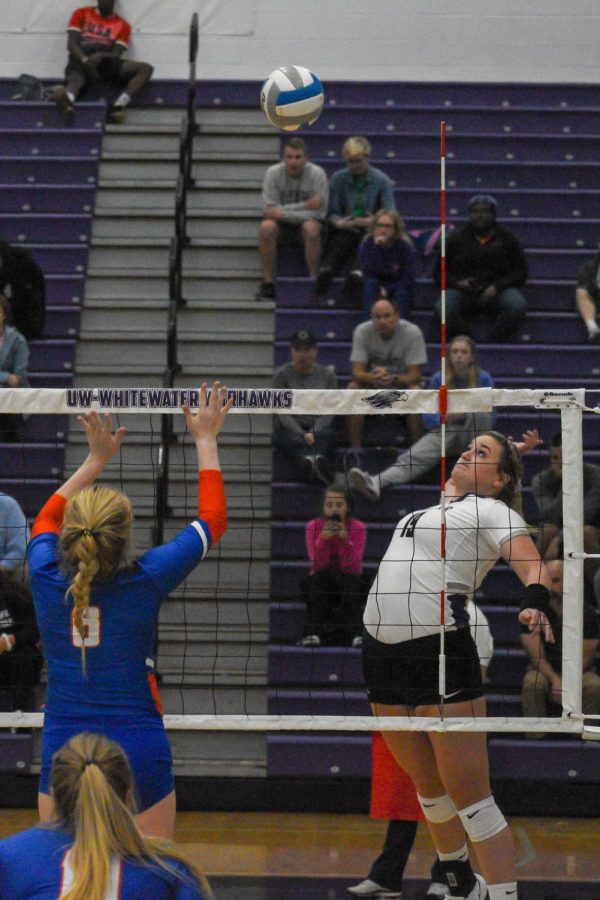 Erin Erb goes up for a kill against UW-Platteville on Tuesday night, Oct. 8.

The No. 9 ranked volleyball team won at Kris Russell Arena in a game against UW-Platteville Wednesday night three games to zero.

Two of those matches flashed dominance by both teams, fighting to secure the last point with multiple lead changes. Serving was fast and accurate, creating an exciting output as senior Ashton Doll lead the Warhawks with 8 kills. During the first match Platteville came out firing. Warhawks answered back by taking control of the match midway through and scoring the final 7 points to win the match.

The second game saw the Pioneers on a strong offensive. They scored early points with fast serves by their sophomore server Lauren Murphy in her first career start. The Pioneers kept the game tied up the latter half of the game, but a series of defensive blocks from the Warhawks won them game two (25-23).

“I am so proud of that girl. This is actually the first game she’s started all year, and so for her to come out and have worked so hard all year, and really perform and do her job, you just cant be more proud of a kid whose done that,” said Birkicht.

In the third and final game of the night, Warhawks defense was on fire staying ahead of the Pioneers. The Pioneers tied it up for the latter half of the match. However, a final defensive push from the Warhawks cemented the victory (25-23).

“All of our conference opponents are really tough. Platteville’s had a really great season so far so for us to be able to beat them three to zero is pretty exciting,” said head coach Stacy Boudreau.

Boudreau also commended the defense’s performance during the game noting their strong blocks and the height advantage that UWW has over the majority of its other conference rivals. The Warhawks advantage in blocks was (6-5) with aces (8-6).

“I feel like our blocks haven’t been as strong. We aren’t pressing our blocks very good, but in practice that’s what we’ve been focusing on is the basic blocking. So I feel like we really did well with that today,” said  Ashton Doll.

Doll presents a considerable obstacle for her opponents, with an additional six blocks on the defense.“She’s a tough one. Every match you go up against her we’re talking about her, trying to get a scouting report on her, but at the end of the day the best way to beat her is to make sure the ball doesn’t get in her hand. Once the ball is in her hand she’s pretty hard to stop,” said coach Birkicht.