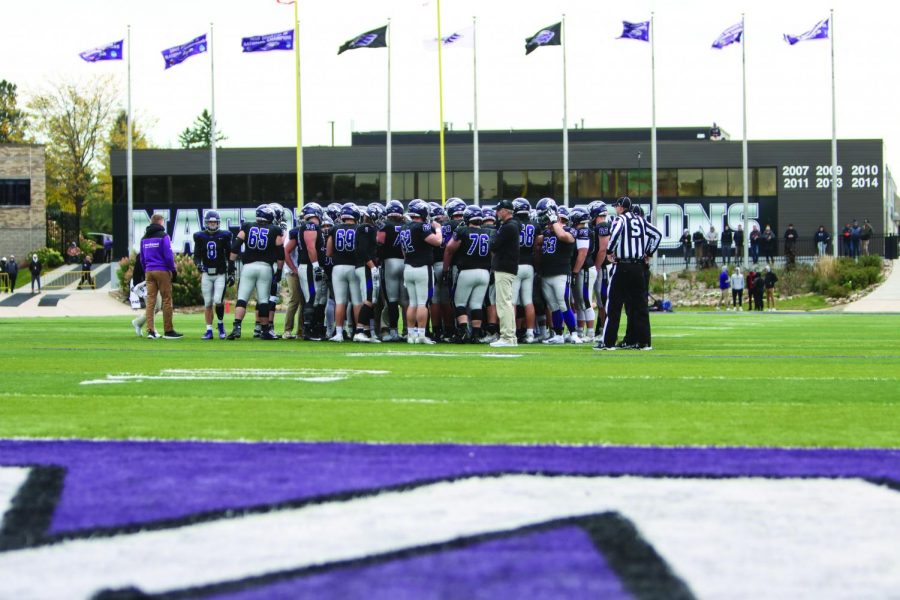 Warhawks huddle to strategize before their battle against the Pioneers.

UW-Whitewater will retain the Miner’s Axe trophy for winning the George Chryst Memorial Bowl. The contest between the Warhawks and Platteville Pioneers ended by a score of 21-14 Saturday, Oct. 12, with Jarrod Ware scoring the go-ahead touchdown early in the fourth quarter.

“This is the home of the Axe, and you need to defend that,” said senior Quinn Meinierz.

In his four-year career, the axe has never left Whitewater. In fact, the axe has gotten comfortable being displayed in the William’s Center, where it’s been for the past 14 seasons.

It is named after former UW-Platteville coach George Chryst, who passed away suddenly in 1992. Since 1995 the bowl has been contested, with the Miner’s Axe being the prize.

“I would say we talked about it very little, but we also talked one time very serious about it,” said Meinerz. “Keep the axe here.”

The ‘Hawks did a good job of not letting the off-field affairs affect the game, holding their poise down the stretch, but after the game, head coach Kevin Bullis wanted to reflect on something bigger than football.

“George Chryst was the most authentic human being, great coach, passion for the game,” said coach Bullis. “That’s why that axe is special to me.”

The Warhawks dominated the game in terms of time of possession and first downs, but struggled in the red zone.

“There was no reason to change anything, it was clearly  working. It was just a matter of making that endzone push,” said Meinerz.

The Warhawks had seven oppertunities inside the 20-yard line, but only scored on three. They missed two field goals, and once fumbled on the 10-yard line.

However, the defensive line put in one of the best performances all season, stopping the Pioneer offense time and time again. Freshman Niko Lemke was named the Chryst Bowl Defensive MVP. He registered three tackles, including two sacks, and one forced fumble.

“Through practice we worked at 100% knowing that our competition was going to be really hard,” Lemke said, a sentiment echoed by coach Bullis.

“For our players and our team there’s a rich tradition behind the platteville whitewater game, there always has been. I think the biggest and most important part of that tradition is the respect that both teams and programs have for eachother.

The Warhawks went into halftime ahead 14-7, but it could’ve been more. After being stopped twice on third down, Whitewater tried for short field goals of 21 and 28 yards, but missed both.

“You can’t miss field goals,” said coach Bullis. “We have a guy whose been a veteran, very good kicker for us, right now.” “I feel very confident in our ability to get (Special teams mistakes) corrected, but we haven’t gotten it corrected. There has to be a greater sense of urgency to get that fixed in all reality.”

The Warhawks were tied heading into the fourth quarter, a place they haven’t found themselves in all seasons. They drove down the field, and Jarrod Ware scored with 11:03 left in the game, and it was up to the defense to bring home the win.

“We definitely pinned our ears back and just kept going.”

And keep going they did, all the way to the final whistle, and the triumphant trophy raise.