It’s On Us week 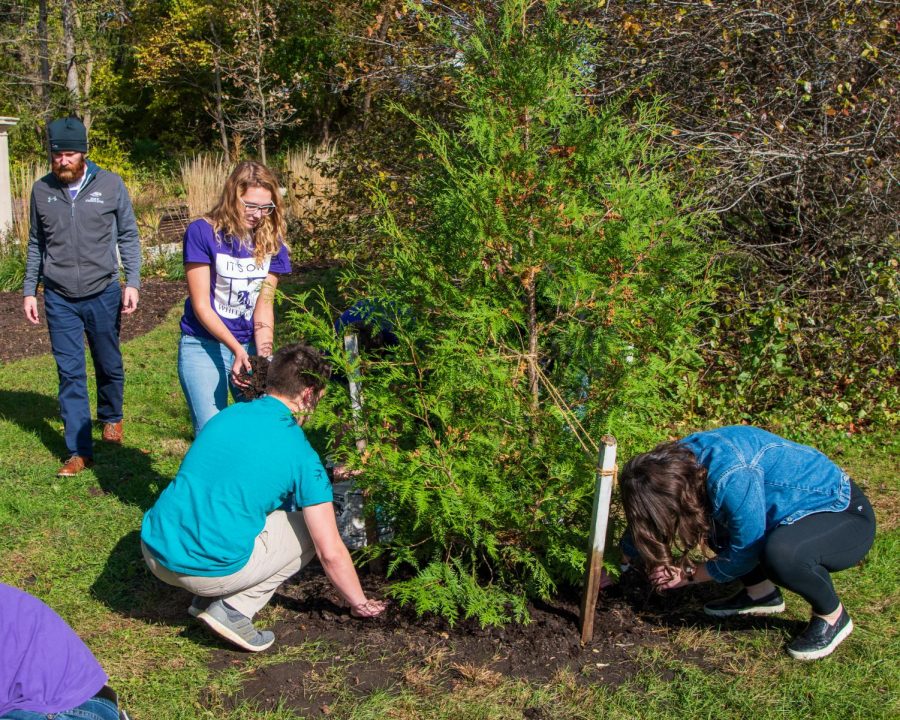 Participants of Whitewater Student Government’s sponsored It’s On Us week, panted trees during the tree planting memorial ceremony at the Campus Memory Garden.

During the week of Oct. 21, UW-Whitewater held It’s On Us week, a week dedicated to sexual assault awareness and prevention.

Many events took place during the week, including booths in the University Center selling shirts, bingo night, a tree planting ceremony, and yoga day.

“During the tree planting ceremony, there is a moment of silence in honor of sexual assault survivors,” said Jody Wentworth. “The yoga day is also to address the mental health aspect [of sexual assault].”

Wentworth is the Whitewater Student Government (WSG) Associate Director of Student Affairs and this is her first year helping organize and run events.

“The thing that is most physical is Thursday, with the tree planting ceremony and everyone wearing their shirts. It is what I am most excited for. In 2016, we had 1,000 students wearing shirts, which broke the record actually,” said Jen Purcell.

Purcell is the President of WSG and has been organizing It’s On Us along with Jody and other organizations. She has helped sell t-shirts since UW-W took on It’s On Us in 2016, and helped promote it last year as Director of Public Relations.

“There is still such a lack of education on what consent is,” Purcell said. “People have this idea that it’s being pulled into an alley but the reality is that it’s people we know and are close with. [That] culture still needs to change.”

It’s On Us started as a call to action campaign created by the Obama administration in 2014. The intent is to focus on sexual assault prevention on college campuses.

“The events are a good start, but the standpoint [of It’s On Us] isn’t just applicable to one week,” said Chrystina Pacchini. “The message is: see something, say something. That is applicable in any environment at any point in time.”

Pacchini is the president of the Coalition Against Sexual and Interpersonal Violence (CASIV). She has been the president for a year and a half.

“We cohost a lot of the events that occur in April for Sexual Assault Awareness Month. Last week, we had our escalation workshop which is a video on what an abusive relationship looks like from all sides,” Pacchini said. “It fits into the It’s On Us mentality on being able to recognize those signs.”

WSG and CASIV will host another It’s On Us week and many more events in April for Sexual Assault Awareness Month.

It’s On Us is a reminder that survivors of sexual assault are all around, and it is important to both support survivors as well as end the harmful culture surrounding sexual assault, violence, and harassment.

Victims of sexual assault can contact campus police if they wish to report, receive counseling and medical attention from University Health and Counseling Services, file a misconduct complaint with the Office of Student Life and seek support from friends and family.