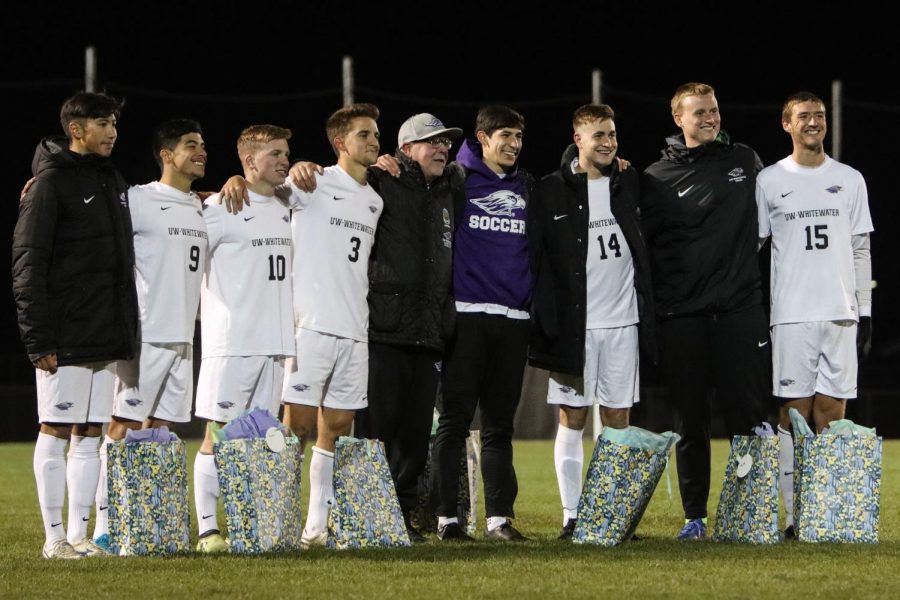 The UW-W Men’s Soccer Team captured a 100th win for head soccer coach Tony Guinn Saturday, Oct. 26 against Wartburg College (7-6-2) after coming off a tw0-game win streak. The opportunity against the Vikings presented a revival of the postseason aspirations for the Warhawks at Fiskum Field Saturday night coming home with a 2-0 win.

The Warhawks are hoping to make it to the NCAA DIII tournament, where they must qualify in order to participate. Building a qualifying record is slowly coming to an end and the Warhawks look to make a come back in time to make their best attempt on claiming a top 25 ranking in DIII.“We have been able to stay competitive in every game we have played this year and even though we did lose those three, our guys are still confident,” said Taylor Ortiz

The qualifying period starts picking up around November, where the team will be attending the ACAA Championship and facing Finlandia (Mich.) in a semifinal match

The men’s team previously had a tough loss on the road Wednesday Oct. 23 continuing a painful string of events. Having lost three straight games, this is not something coach Guinn and the team is used to and something the Warhawks have yet to do this season.

A week of events could put the last couple months efforts in jeopardy as they hope to find a top 25 ranking.

Unfortunately, each one of the losses in the last three games have each been by a total of one point. Something like this could crush a team and ruin morale heading forward.

Once the Warhawks were 12-1-1, then headed into the three game slide where they sit at 12-4-1. “We didn’t come away with those three wins, it has been tough but we are a tough team There’s no reason we cannot rebound,” said Henry Raymonds.

Warhawks were close to sealing the losing streak at two as they were able to shut out North Park in the second half. Allowing two goals in the first half, rallying back 2-0 was on their minds. Unfortunately, they were only able to rally 2-1 as time expired in the second half.

“We have been playing some of the best teams in the country and we have been very competitive with them. We might not have won our matchup against them but our guys fought really hard and I think we are very close to winning those games, I am very proud of my guys. We have been fighting hard,” said head coach Tony Guinn.