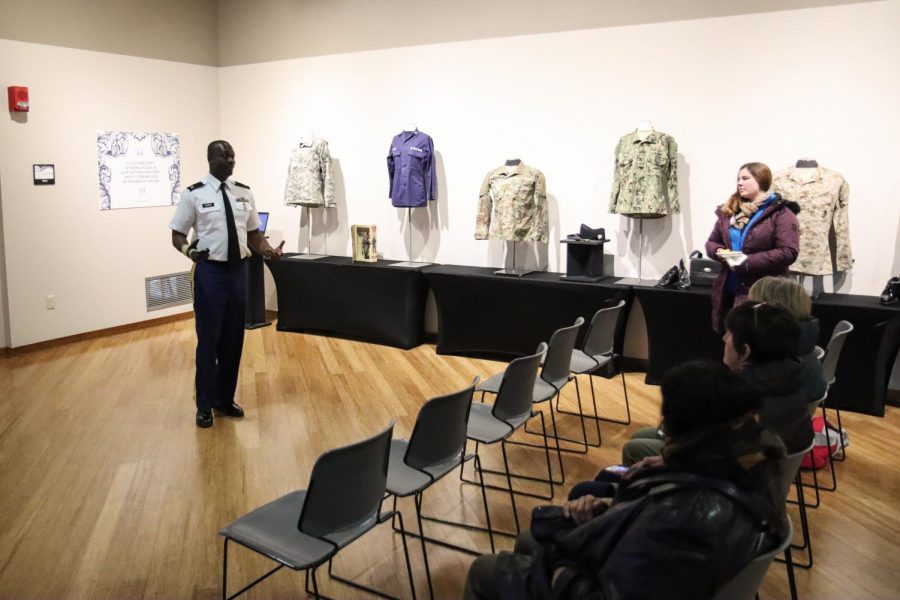 Sergeant Richard Harris delivers a presentation to attendees of the Women of Valor exhibit on Veteran’s Day.

The campus and community toured the Women of Valor veterans exhibit Monday, Nov. 11 in Roberta’s Art Gallery to learn about the females who serve in the United States military.

There was food catered during the reception as people viewed the exhibit and thanked the veterans who came for their service. At 1 p.m., two small rows of seats were placed in the middle of the gallery in preparation for the event to start. However, the majority of people stood in the back as they listened to 2 veterans present their speeches about how women are overlooked in the army and how to bring about more gender equality.

Sergeant Richard Harris, a six-year veteran of the United States Army, was one of the main speakers and was the person who came up with the idea for the exhibit.

“I talked to some of our female veterans on campus through email as something, just a direct conversation, told them what we were intending to do and why, and it was all hands on deck at that point. And again, it was extraordinary because we actually got all five branches represented and that’s really rare to get all five branches represented in anything that we do. And there’s an attachment-a personal attachment- to uniforms, so it’s really hard to get veterans to separate from their uniforms for any period of time.

“So we were able to do it because of the mission of bringing education and awareness to the issue of female veterans,” Harris said.

The exhibit consisted of uniforms from the different branches that the military women served in. There were also pictures of UW-Whitewater veterans, and a female version of a GI Joe figurine. A timeline was also put on one of the walls that showed how women started getting involved with the military as there were flags placed across the room from the uniforms.

Alicea Kelly was one of the speakers at the exhibit and left the Marine Corps as a Corporal.

“I think everyone comes to these with different perspectives and I know that there are people who aren’t aware of issues with women in service. I hope that it kind of enlightens them to know that there are problems there and that people who are more familiar-there are some women here who are also veterans-I hope that hearing another person, another female speak about my struggles will motivate them and empower them to speak more about theirs,” Alicea said.

A lot of pride was shared among the veterans as they were proud that their service was getting recognition and people were becoming aware and getting educated on how more gender equality needed to come about to show that women are not invisible in what they do for the military.

Thor Manson is a senior majoring in Geographical Studies and has been in the military for 7 years and is in the army, the National Guard, and is a Geo Spacial Engineer.

“It’s a very emotional event for me. I look back and I reflect on the people that I’ve known and I’ve served with, those that I don’t keep in touch with anymore and unfortunately those that we’ve lost whether to service or to the battle at home because of loneliness or things like that,” Manson said.

Once the reception ended, more time was left for attendees and veterans to continue reading what was on each plaque of UW-Whitewater students that hung on the wall, and to look at the uniforms on display.

The exhibit will continue until Nov. 22