Offensive lineman works at fish camp, but it's no vacation 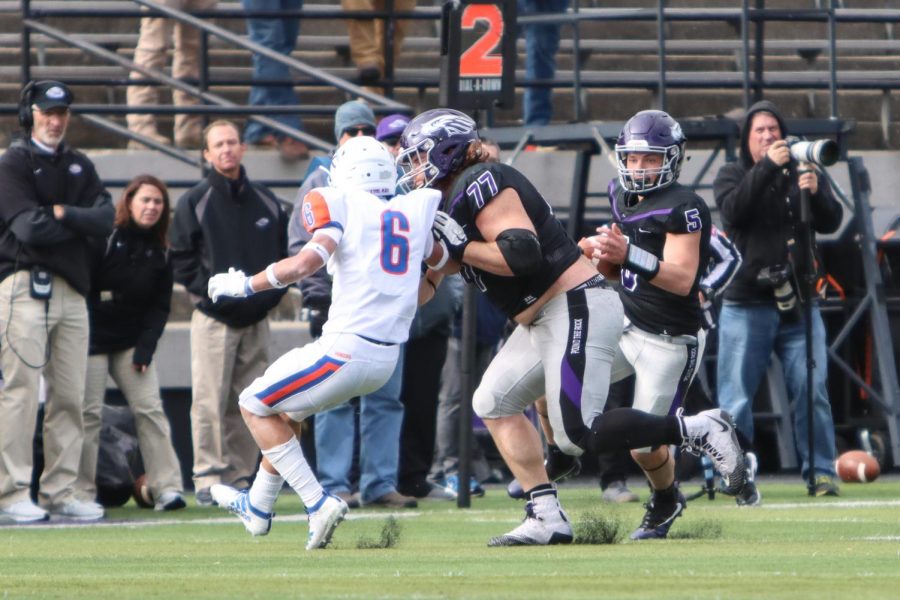 Quinn Meinerz (#77) clears the way for Zach Oles (#5) against No. 19 UW-Platteville as Head Coach Kevin Bullis (left) watches on.

It’s a beautiful day in Ontario, Canada as Quinn Meinerz starts his day. It’s about 8 a.m. as the sun rises over Hector Lake, where he stays. It’s nice to lay in bed for a while, however Meinerz has to get up – he’s got trees to clear.

The walk down to the portage is quick, as the island is small. Since everyone who arrives at the island has to come through these portages, they’re the top priority to clear.  He’ll spend about 8 hours clearing trees today, so that the portages can be ready to launch fishing boats.

After that, he moves on to the next task, getting fuel to heat the cabins that make up the camp.

Hector Lake’s main island is a Fly-In fishing destination for tourists, but for Meinerz it’s his summer residence. After rolling the 400 lb. fuel tanks near the cabin, his eight-hour work day comes to a close. But that doesn’t mean there’s time to rest. He has a workout to do. There’s no social media distractions, and Meinerz says he only has one hour of internet access a day, which suits him. Like something out of a Rocky montage, this is the Warhawk offensive lineman’s off-season training camp. He’s isolated, insulated and motivated.

So how did the Meinerz, a product of Hartford, Wisconsin end up with such a wild job?

“My great-uncle Tim lives in Eagle, Wisconsin, and he owns the island in Canada, it’s in Northwest Ontario. So basically, he has people that fly in there to do week fishing trips, so what I do is I go up there for the whole summer,” said Meinerz. “I basically get done with finals and within a few days I’m up in Canada for the whole summer.”

He does plenty around camp, including cutting grass, clearing trees, and making sure portages are clear for guests.

However, he’s got more than just the camp to keep up. Meinerz can’t afford to fall out of shape during the summer months while he’s up in Canada. He’s got to work on keeping the physique that got him ‘National Strength and Conditioning Association All-American’ status for his commitment to strength and conditioning.

He is able to turn his day job into a workout of sorts, especially considering the stuff he’s doing. He’ll pull those trees from this morning’s work into the forest for an arm workout, and leg day consists of rolling 400 lb. fuel jugs to the visitor’s campsites. Conditioning is a bit tougher, considering the close quarters.

“Because I’m on an island, it’s pretty hard to do cardio,” he said. “I would drive the boat out and drive on the four-wheeler out of the woods, and go to one of the logging roads, and that’s where I would do my running.” It seems like nothing can stop a Quinn Meinerz workout.

Being in such an isolated place, he wasn’t afforded standard workout tools or space.

“He had to literally bring in the weight equipment,” said Warhawk head coach Kevin Bullis. “Quinn is such a motivated human being, there’s nothing deterring him from getting up and making himself better, that’s the type of guy he is. That’s the reason as a junior he’s a captain.”

On the field, Meinerz is a standout because of more than just his size. Being a captain takes years of commitment to this team, so the fact that Meinerz already holds that badge of honor is all the more impressive.

“He leads by example, which is fantastic, but he also leads verbally,” said Bullis, who said he has been around just four team captains who were juniors in his 30+ years of coaching.

For most, this workout abroad program sounds crazy, a sort of isolated, high intensity workout in the wilderness, like something out of Rocky IV. However, Meinerz wouldn’t even credit it as his toughest workout.

“I’m definitely a person who doesn’t let anyone else outwork me,” he said, allowing his mind to fall back on his high school days where he competed in Football, Wrestling, and Track. He told the Royal Purple about a time in wrestling practice where they held a pushup competition.

“It was basically doing push-ups till you can’t anymore. I did push-ups until I passed out, and that was when I knew that I wasn’t going to let anyone outwork me. I was willing to go to that extent.”

Those push-ups led Meinerz to be recruited by the Warhawks, where he evolved into even more of a leader and continued his journey upward. He became a starter in just his second year on campus, and played alongside Nate Trewyn the standout center for the Warhawks who now plays for the Los Angeles Rams.

“I took a lot from Nate, because I was a sophomore and it was my first year starting and he was a senior. He was able to calm things down,” said Meinerz. Now, the leadership role falls to Meinerz, who is an offensive capitan even as a junior.

As the sun sets over the western shores of Hector Lake, and Meinerz returns from a logging road run, the scene returns to calm. Meinerz says that he might just stay here after graduation. There is plenty of work to be done, after all.