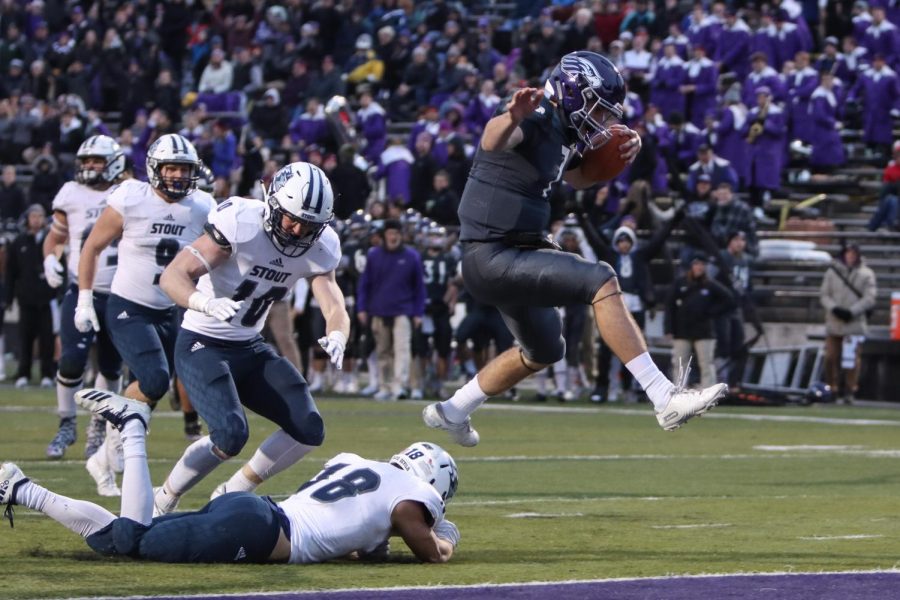 Junior QB Max Meylor hurdles a defender on his way to the endzone. He rushed for 3 touchdowns on the season, including the final score against UMHB on Saturday, Dec. 7. Meylor has also thrown for 800 yards this year.

Whitewater’s forced fumble early in the fourth quarter proved to be the backbreaker for Mary Hardin-Baylor as the Warhawk offense methodically destroyed last season’s champions. The game ended with a historic victory for the Warhawks, by a score of 26-7 over UMHB at Crusader Stadium in Belton, Texas.

The No. 7 ranked Warhawks controlled the tone of the game, holding the ball for 42 minutes. UMHB’s time of possession was under 18 minutes. The ‘Hawks did not settle for anything to be up for chance this time and it was clear this team had something to prove, to themselves and their opponent, even after a tough road trip.

Facing a team with a dominant resume of 27 straight victories coming into Saturday’s quarterfinal matchup, the Warhawks were underdogs for the first time all season.

The win shook the playoff to its core, which saw No. 1 ranked Mt Union, No. 3 Wheaton and now No. 2 UMHB all eliminated before the semifinal. A strong performance helps Whitewater book its ticket back to the Perk, where they’ll take on St. John’s in a semifinal matchup.

Whitewater’s strong presence was not what Mary Hardin-Bailor was expecting. The home field advantage for them was spoiled, and the Texas heat was no match for cool Warhawk heads. The ‘Hawks had only one interception and racked up almost 400 yards of offense.

Whitewater finished the game having only allowed 140 yards of total offense to UMHB, including minus three yards allowed on
the ground and only one passing touchdown. UMHB averaged over 47 points and 600 yards of offense during their season, including three separate games where they scored over 75 points.

The Warhawk offense also excelled on the ground with a season high of 232 yards rushing and an efficient 112 yards passing from QB Max Meylor, on just 12 attempts.

“Last year we turned the ball over four times and we weren’t able to get any takeaways. This time around we were able to execute and really put up our most complete game of the year,” said Bullis. “Our guys did great. We were able to limit their deep balls and not allow anything on the ground.”

Whitewater took a lot of pride about how they have progressed as a team and kept high confidence within their locker room. Finishing with 110 yards on 12 carries and 2 TDs, senior running back Jarad Ware led the team from the front. Following the game, he had insights on what helped the Warhawks click.

“We came in and established ourselves, making sure we were going to be physical and see who really wanted this win.” said Ware.

Coach Bullis’s efforts in his planning are worth noting, but executing those plans are guys like safety Nate Trannel, who forced a crucial interception.

“We stuck to our process. We knew their concepts and we didn’t want them to get behind us, as we know that we could run with them and through the game the plan worked,” said Trannel. “This doesn’t erase that taste [from last year]. We never will get over that. It’s always in the back of our minds. I am just excited that we have another team to go and face.”

After forcing a punt by UMHB on the first drive of the game, the Warhawk offense put together a devistatingly long drive, which ate up 10:46 on the clock. While the drive didn’t end with a touchdown, as the ‘Hawks were stopped on their own 2-yard line, they got 3 points and set the tone for the game ahead.

The Warhawks put the ball on the ground and tried to #PoundTheRock, the social media tag they’ve been using all season. Their ground attack was too hot for the best team in Texas to handle. The rushing attack featured four runners, led by Ware. Junior Alex Peete added 75 yards on 19 totes, and Senior Ronny Ponick rushed for 37. QB Meylor also scrambled for 19 yards, including a touchdown late in the fourth quarter. This made it a three-possession game, which was too much for UMHB to overcome.

Whitewater played a solid game against Mary Hardin-Baylor hold- ing them to less than 150 yards of total offense and only giving up one score during the second quarter. The Warhawks also posted a time of possession statistic of 42 minutes to Mary Hardin-Baylor’s 17. To be able to beat a team this roundly would send a message to the Division III college football world during any season. But to do it to the second ranked team in the country and a team some picked to repeat as champions puts everyone else that is left on notice.

That next opponent is St. John’s who were able to win 34-33 and will now face Whitewater at Perkins Stadium at 2 p.m. in Perkins Stadium on Saturday Dec. 14 in the semifinals. They will face off to see who will book their flights for nationals.