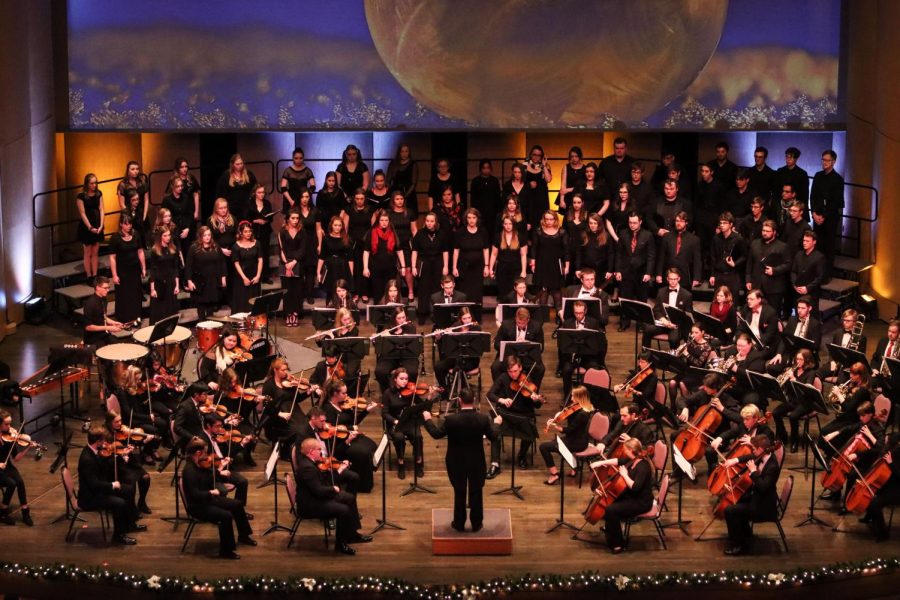 The Gala Holiday Concert is the biggest fundraiser of the year for the music department. As a fundraising event, its purpose is to help raise scholarship money for the students of the music department to help them continue school as they get very busy juggling their work, school and practice. There was much work that was put into this in order to make it not only a fundraiser and collaboration, but also a night for people to enjoy the numerous festivities.

Although highlighted as a fundraising event, the concert was a way for people to support the music department, as well as watch the different orchestras and ensembles perform their musical Christmas pieces. Many within the music department have said it is a wonderful way to show the community how much work goes into the concert.

“It’s important for me because people get to witness all the hard work that’s being done. I think even more importantly, it shows that we care enough about the students. We’re going to raise to $25,000 and give it right back to you,” said Department Chairperson Michael Dugan of the music department.

It was a merry holiday event as a catered dinner was served. Dinner guests enjoyed a special catered menu before the concert began that finished with a double chocolate cake. The Chancellor’s Quartet added to the night’s merriment by playing Christmas songs  for guests on stringed instruments. Professor Leanne League coaches the ensemble made up of music majors selected by the string faculty.

The atmosphere was filled with Christmas spirit as groups of students in choir and different ensembles performed in various places around the Young Auditorium and the Center of the Arts building. Wherever these groups performed, there were always people around to listen to their beautiful sounding and melodic music.

There were many activities taking place upstairs in the Fern Young Terrace. As the groups performed Christmas songs, people were also able to observe items displayed around the backside of the terrace. One of these items up for auction was a miniature replica of the leg lamp from the movie A Christmas Story. The third activity that took place was a mystery gift activity where attendees purchased the wrapped package or bag up front without knowing what was inside it.

As attendees were still looking at the auction items, people started making their way downstairs to the Young Auditorium to find their seats for more performances. As a pre-concert act, the Whitewater High School Handbell Choir played. After their performance, the Symphonic Wind Ensemble began the concert.

Not too long after they left the stage and the stage lights turned down, Dugan appeared on stage wearing the bunny costume from A Christmas Story, explaining it was due to the faculty donating enough money to the fund to raise two or three hundred dollars more than last year. He also allowed the audience a brief moment to take pictures of him. The choir was added to the concert as well as a huge screen hanging behind the performers showed Christmas and winter scenes.

“I think it’s neat how they involved everyone and kind of made it interactive,” Gabe Cuadra said who was visiting with his wife from Houston.

To end the night for a lively and engaging performance, the Concert Choir, Chamber Singer and the Whitewater Symphony Orchestra did an audience sing-along as they performed White Christmas, ending with fake snow falling over the audience. The night was full of holiday excitement as the students performed their ensemble, choir and orchestra pieces and everyone experienced it.

Check out uww.edu/cac/music to see both the latest events and happenings.