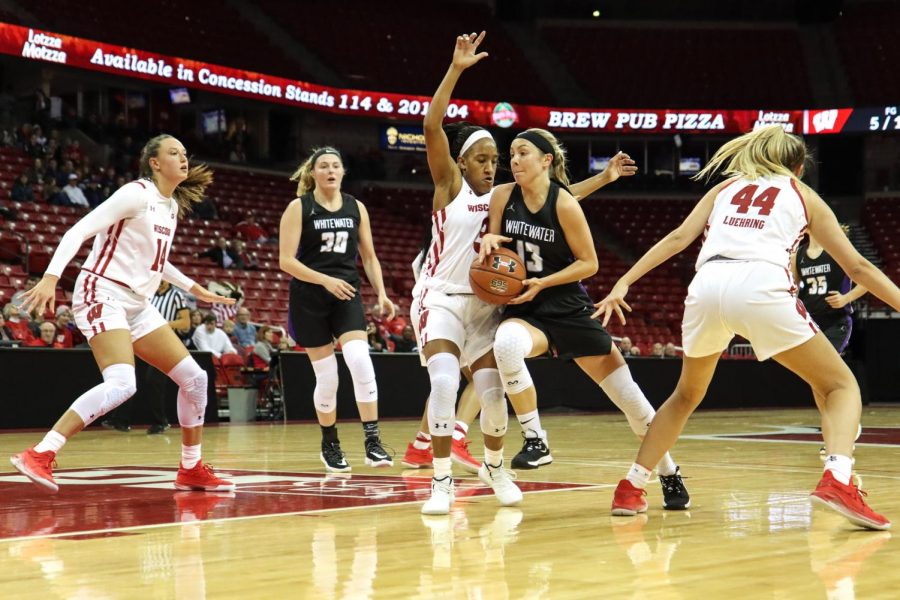 Senior Becky Raeder (13) drives past Suzanne Gilreath to score a basket at the Kohl Center in November. She celebrated Senior Day, along with Megan Corcoran, during halftime of the game against UW-River Falls

Becky Raeder has been a fixture in the Warhawk starting lineup, so when her name was announced as one of the five starters on Senior Day against UW-River Falls, it was no surprise. For the 84th time in her career, Raeder led the Warhawks (19-2 [9-1 conf.]) to a 71-45 victory over the Falcons (5-16 [0-10 conf.]) on Saturday, Feb. 8. The game saw Raeder and teammate Megan Corcoran honored during halftime in a tribute to both players’ careers in Whitewater.

Raeder, who hails from Sheboygan Falls, was gracious in accepting the award at halftime, where the Warhawks were leading by 18. She finished with 16 points including four 3-pointers, but stats will never be enough to summarize Raeder’s contributions to the Warhawk program.

“We didn’t want Becky Raeder shooting the ball. We did not close down well to her,” he said of the Warhawk guard. He went on to call her a competitor, and talked about Raeder’s leadership ability.

“She’s one of those kids you watch on film and go ‘I wish we had one of those,” said DuDonis. “It takes four years to become this great player, and this great team.”

The years of Raeder’s career have seen high achievements for the Warhawks, including two WIAC championships and three National Championship tournament appearances. She has also been awarded WIAC Scholastic Honor Roll three times, as well as an appearance on the 2018-19  All-Sportsmanship team, making her one of coach Carollo’s standout players.

“Great leader, she cares more about her teammates and winning the game more than anything else,” said Carollo.

Raeder has worked hard to earn the trust of involved with the program since her first day in Whitewater, a trait that impressed former assistant coach Amy Zelinger.

“You could trust her. She didn’t make a whole lot of silly mistakes, she had an obvious basketball IQ,” said Zelinger, who was responsible for recruiting Raeder out of Sheboygan Falls high.

“When she came here it suited her a little more to play on the wing, but she still had the great qualities. It was almost like having two point guards at the same time, where you could trust Becky to get us organized if needed.”

Zelinger now plays more of an advisory role in Raeder’s academic and athletic career as she transitions to the role of COBE advisor.

Raeder’s role on the team involves being the floor general, moving players around on offense and making sure everyone knows their matchup in coach Carollo’s man-to-man sets. She’s often pointing out a weak-side kickout, or calling out “Screen!” to her teammates. She acts as the de facto point guard, even if she’s guarding the other team’s wing players.

She’s also tasked with the playmaking duties, often bringing the ball up the court to start the offense in motion. She doesn’t have eye-popping assist numbers (2.7/game) or steals (1.6/game) but makes impact plays that don’t show up in the box score.

“Look back at the minutes she has played over the course of her four years. She’s on the floor because she’s trusted,” said coach Zelinger. “From the perspective of a coach, you want the people in the game that you can trust.”

Raeder has worked hard to become the emotional leader of the team. She cites team activities in August and September for creating a strong bond between teammates, which pay dividends in February and March.

“I know my teammates pretty well. I know when they’re getting down on themselves, I know when to have their back a little bit more, or get on them about something that they should be doing better if they aren’t,” said Raeder, who has been in the program longer than any other player.

She talked about having to arrange players-only practices in summer, and having to create culture from day one.

“It was kinda tough, because Freshman outnumbered the returning players,” she said.

As the Warhawks come down the stretch of the ‘19-’20 season, they will be led by Becky Raeder, someone who truly exemplifies what it means to be a Warhawk.