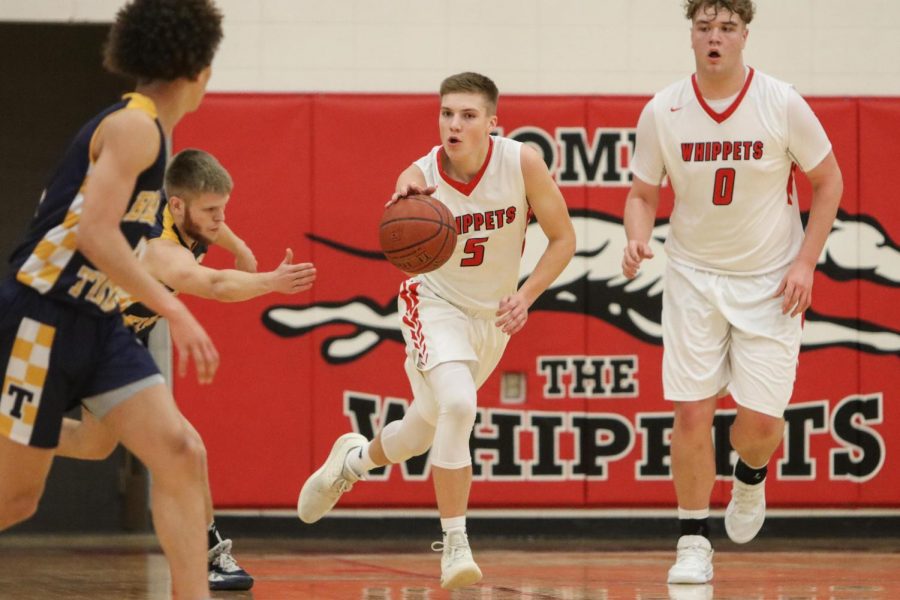 Brock Grosinske (5) brings the ball up the court in front of Jake Martin (0) against Turner on Tuesday at home. Martin finished with 19 points.

The Whitewater High School boy’s basketball team faced a tough schedule this week as they lost in both of their matchups to conference leaders Turner and East Troy by scores of 69-34 and 78-52 respectively.

Against Turner (13-3, [12-1 conf.]) on Tuesday, Whitewater (7-10, [5-8 conf.]) was able to keep pace, staying with the Trojans as they fed junior Jake Martin who used his 7-foot frame to his advantage and scored four of his teams first nine points to keep the game tied after 6 minutes of play.

Both teams were running the same methodical offenses early on, feeling each other out and trying to find weaknesses. Turner was able to find their opportunity first and pull off a 13-0 run, taking advantage of a Whitewater offense that was marred by turnovers.

Whitewater was unable to score for almost five full minutes and they couldn’t get past Turner’s physical defense. This drought ended with Martin scoring his fifth and sixth points of the game with 6:44 left in the first half. A minute and half later, Martin was able to cash in from close range to bring his first half total to eight out of his teams 13 points before the break as the half ended with Turner leading 29-13.

Unfortunately for the Whippets, the second half did not get better. Turner was able to go on another 13-0 run to start the half. This run was bookended by two layups by Martin bringing the score to 42-17 with 13 minutes left.

Turner’s lead continued to grow throughout the game as their physical style of play created turnovers and offensive miscues for the Whippets. Turner would control the second half and win by a score of 69-34.

Whitewater’s second matchup of the week against East Troy (16-1, [13-0 conf.]) on Friday, Feb. 7 started off eerily similar to their first. Whitewater seemed to have control of the contest early. Going up on East Troy by as much as six points in the first half, the Whippets executed well early.

However, the Trojans were able to force some defensive stops and got their offense going, taking a 13-16 lead After a 11-2 run with just over 8:30 left in the first half. East Troy was able to keep their lead going through the remainder of the first half, continuing to force stops and turnovers and finishing the half with an 11 point lead. The score was 36-25.

Whitewater junior Carter Brown had a solid game on Friday after being held scoreless against Turner earlier in the week, scoring 16 against East Troy to lead the squad.

“Other than turnovers and Vukovich, I thought it would’ve been a lot closer,” said Brown.

In the second half, East Troy’s lead grew throughout due to  Whitewater’s offense not keeping up. The Trojan offense was led by senior Aaron Vukovich. Vukovich started the game off hot, scoring his team’s first seven points and didn’t cool down throughout the game.

“I thought our intensity was good throughout,” said head coach Dan Gnatzig. “It’s a fine margin for error with a team like East Troy. We just gotta do the little things better. Being stronger with the ball and finishing some stuff we want to execute.”

Whitewater’s inability to keep up with East Troy’s offense kept the game from being a contested affair. While their offense didn’t have as many problems as the earlier game against Turner, the defensive side of the ball couldn’t get the stops needed to spark a run and close the gap. Whitewater would fall 78-52 to finish out a tough week of conference matchups.

Jake Martin was involved heavily for his team this week. Leading his team in scoring against Turner putting up 19, and then putting up 15 against East Troy. There seemed to be a real effort to get him the ball to exploit the mismatch his 7-foot frame gives him over defenders and also move him around to open up opportunities to score.

“He’s gotta get catches and we have to feed off of him,” said Gnatzig. “I thought he did some nice things.”

“What we were trying to do before was force it down,” said Martin. “Teams start to catch on to that. By keeping me outside that’s giving the guards other looks or leaving them wide open.”

Whitewater junior Carter Brown had a solid game on Friday after being held scoreless against Turner earlier in the week, scoring 16 against East Troy to lead the squad.

When asked about what his team needed to do to keep in control during the physical matchup, Brown emphasized being calm and collected.

“Make sure your whole team doesn’t go to the refs every single call: just be calm with the ball.”

Whitewater will hope to get back in the win column as they face off against conference opponents Jefferson and McFarland next week.