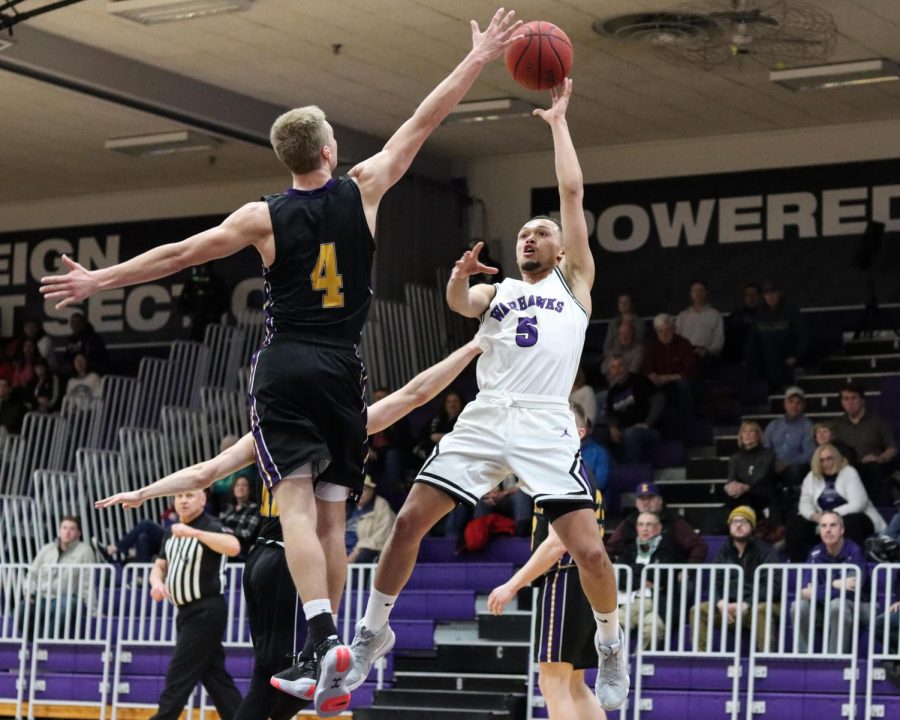 Bailey Kale drives to the hoop in the game against Stevens Point on Feb. 5.

Whitewater’s Breontae Hunt opened up the game with an aggressive drive and finish to give the Warhawks their first points of the night. On the very next possession, Equan Ards made a contested fade-away jumper to give the Warhawks an early 4-0 lead. A combination of stifling full court defense, active hands, and a great block by Ards prevented the Pointers from scoring until 16:12 left in the first half. After that, the game picked up a bit with Hunt and Ards trading buckets with the Pointers. With 10 minutes left in the first half, Whitewater was up 13-8.

Eventually Ards, who came into the game having a great season, continued to do so as  he made one of the plays of the year. This was when he hit a deep three from the left wing, stole the inbound pass, and then immediately rose up and emphatically dunked all over Stevens Point. Whitewater had an 11-point lead with a little under 8 minutes to go in the half. But Stevens Point was able to close the gap leaving Whitewater up 36-31.

As soon as the second half started, Stevens Point led by Aaron Knez and Nelson came out firing and retook the lead with 17 minutes left in the game at 41-40. Then after about 4 minutes Ards fouled out and picked up a tech, giving Stevens Point a 4 point possession.

However, with Ards on the bench and Hunt battling an injury, Trevon Chrislom picked up the slack for the Warhawks and gave them a 54-53 lead with 10 minutes left in the second half. Unfortunately, Whitewater was unable to keep the lead as Pointers Ethan Bublitz and Nelson took over the game and Stevens Point jumped out to a 66-54 lead with 7:14 left in the game.

The Warhawks never gave up, led by the hustle and shooting of Brian Conaghan, who was optimistic after the game saying, “When we play all 40 minutes, we’re a tough team to beat.”

Whitewater managed to bring the game back within five with 2:28 left. An and-1 by Hunt brought the Warhawks down three with under a minute left in the game while two acrobatic layups by Bailey Kale put the Warhawks down one with 12.4 left in the game. Whitewater fouled, and were able to get the ball back for a last second shot down 74-72. Kale did an incredible job getting to the hoop for the final layup but the ball bounced in and out to conclude Whitewater’s comeback attempt.

Warhawks’ head coach Pat Miller talked about the final shot after the game. “I thought Bailey did a good job, he got in the paint and he got a good shot off, he got a clean look,” said Miller. “It’s a shot he makes most of the time. I wasn’t displeased with the look we got in that situation.”

“We feel very fortunate to get out of here with the win,” said Semling. “This is such a hard league and Whitewater is playing so well right now.”

Bublitz led all scorers with 24 points, followed by Nelson’s 18 for Stevens Point. For the Warhawks, Ards had 17, and Hunt’s 14 were the top two marks.

On Saturday night, the Warhawks lost another close one to UW-River Falls, 63-60. Ards led all Whitewater scorers with 23 points, Hunt chipped in with nine while Austin Gates and Chrislom both had eight.

Whitewater will return to Kachel Gymnasium to face off against UW-Platteville on Wednesday Feb. 12.