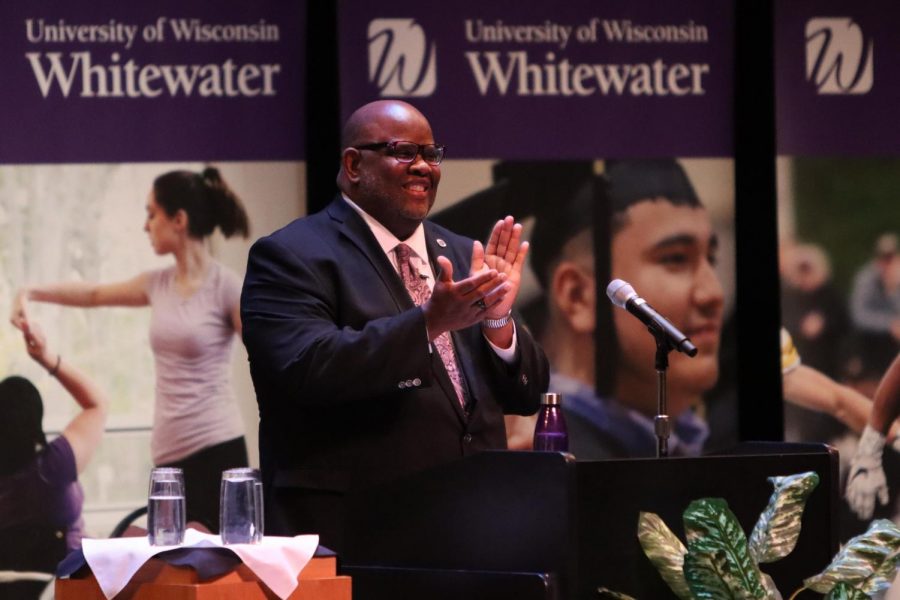 Chancellor Watson cheers on faculty and staff member accomplishments awarded during the State of the University address.

“When I began my tenure as chancellor, I told you the theme of this year was to listen, learn and lead,” Watson said. “We are faced with some significant challenges, as laid out in the message to the campus in late January. As I know that [the University of Wisconsin-Whitewater] is reliant upon tuition as the primary source of revenue, when enrollment is down, there is a direct correlation to budget.”

Enrollment at the University of Wisconsin-Whitewater has been on the decline since the 2016-2017 academic year, according to reports from the university. Because of this decline, the university’s budget has slowly begun to suffer.

“This fall, we faced a drastic decline in enrollment by 4.1 percent,” Watson said. “We had 498 fewer students than the prior fall.”

This decline has cost the university approximately $11 million in revenue from tuition alone.

The chancellor asked that the campus continue to have the correct information regarding the budget situation. Because of future listening sessions that will take place, he stressed the importance of having correct information to help students, staff and faculty ask proper questions to those involved so as to avoid speculation.

Following his opening remarks, Grace Crickette, the vice chancellor of Administrative Affairs, presented how the office is dealing with the budget situation, and how it will be assisting with budget cuts.

The Administrative Affairs division has targeted roughly $4 million in savings for this year and the 2021 fiscal year, coming to a total of about 22 percent of their total budget. They have already achieved $2.2 million of that target goal through implemented efficiency and sustainability changes.

Administrative Affairs has also lessened their fleet expenses by reducing the amount of vehicles they have, while also expanding the shared transportation system that links the Whitewater campus to the Rock County campus. They also have focused on providing better materials for existing faculty and staff to further assist students and their education.

“We’ve also obtained savings through reorganization and consolidation of service efforts,” she said. “This requires absorbing and restructuring workload. We have been very mindful when we’ve done this to redesign the work and provide improved tools to our staff.”

“To address our current budget challenge, Chancellor Watson encouraged all of us to consider reductions, reinvestments and revenue generation,” Cook said. “In Academic Affairs, we have fewer students to teach, so this means fewer course sections. That’s our most visible reduction.”

Cook discussed how the Academic Affairs office must consider activities and work to prioritize as well as what they need to let go. He also discussed how his office is dealing with budget cuts.

“We are reinvesting $1.3 million this year to launch new and enhanced strategies to attract new enrollment and retain more,” Cook said. “We are reducing our spending by $4 million across the division.”

Cook stated that to help the university’s central budget, they are contributing funds to the College of Business and Economics’ online programs from a reserve account in ICIT.

To generate revenue, Cook stated that the University of Wisconsin-Whitewater will be adding new academic programs, such as a MS in cybersecurity and instructional design. This is still pending approval from the Board of Regents.

“It’s critical that we maintain high-quality educational programs and experiences for our students,” he concluded. “I also want to resist the temptation to solve this budget problem with temporary corrections.”

Chancellor Watson concluded the address by discussing what the university must do; stabilize the budget, reduce spending, create new sources of revenue and strengthen enrollment.

Watson, after discussing how the university needs to go about the budget challenge, went into how much there is to celebrate, even through this darkness.