Warhawks took the lead from the tip, but couldn't hold on in the 4th 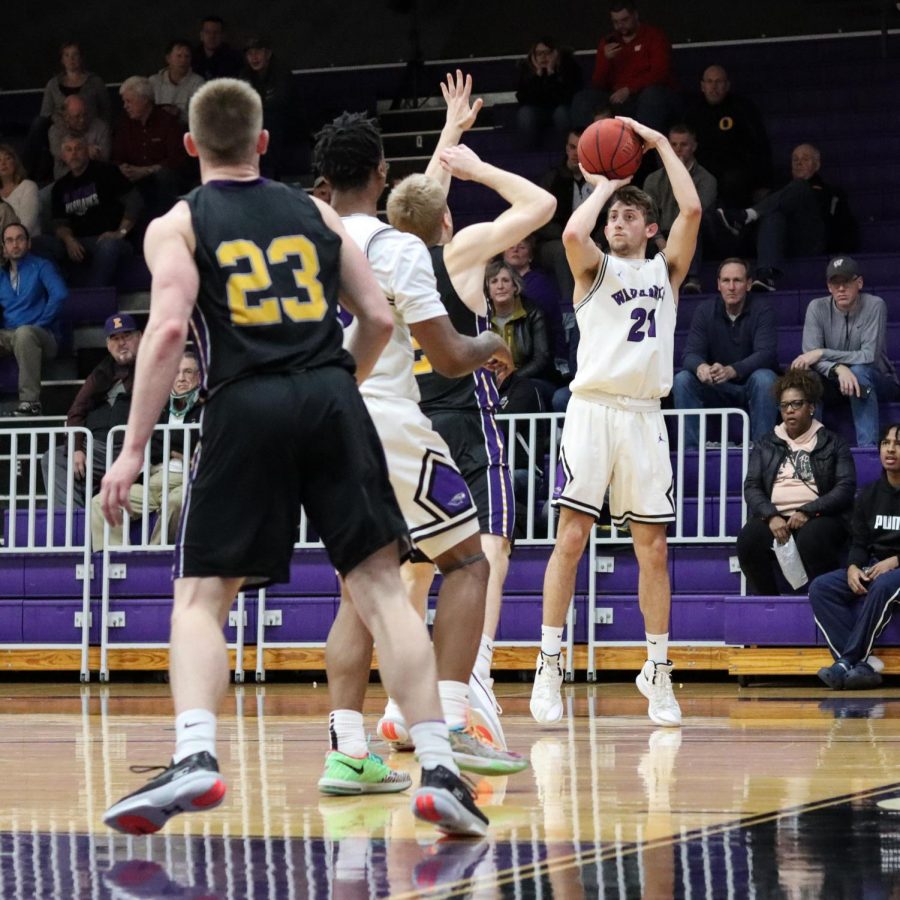 Freshman Austin Gates has been a 3-point threat for the Warhawks all season, and his shot with 2:10 left in the game broke a tie late in the fourth quarter. He finished with a career-high nine points against Platteville.

The Warhawks nearly pulled off an upset against WIAC’s top ranked Platteville Pioneers, but fell short leaving the score at 70-68 in favor of the Pios.

Going into Wednesday’s game, the men had the odds stacked against them. They were going up against the WIAC’s top team, the UW-Platteville Pioneers, who were on a three game winning streak. The Warhawks were also without starting point guard, Bailey Kale, who missed the action due to injury. Before the game, Whitewater forward Trevon Chislom knew his team would have to play flawless defense to beat the Pioneers.

“We just have to have really good perimeter defense because obviously we know they can shoot really well. It’s on our post and our guards to communicate,” Chislom said.

The game started with Breontae Hunt scoring on a putback layup for the Warhawks. Then, a three pointer by Austin Gates gave the Warhawks an early 5-0 lead with 17:16 left in the first half, bettering their start from the reverse game. After a quick scoring run led by Trevon Chislom and Gates, the Warhawks extended their lead to 10, forcing Platteville to call a timeout with 13:29 left. The interruption didn’t slow the Warhawks, who continued onto a 9-0 run and played some of their best defense of the season, led by Gates and Brian Conaghan. Despite the huge effort, the WIAC leading Pios wouldn’t go away easily. Led by Carter Voelker and Blake McCann, Platteville, despite Whitewater’s best efforts, were able to cut the lead to single digits by halftime. At the half, Whitewater was up 37-29.

The Pioneers came out of the half delivering knockout blows behind the shooting of Kyle Tuma and Justin Stovall. The score was tied at 62 until Austin Gates hit the biggest three of the night with 2:10 left in the game to give the Warhawks the lead. Platteville responded with a couple buckets of their own and the Pioneers retook with one point lead with 1:14 left in the game.

The free throw game ensued and with 9.1 seconds left Whitewater was down 2. Equan Ards ran point for the Warhawks but Platteville’s defense collapsed on him forcing a turnover before he even got a shot up. This left the final score Platteville 70, Whitewater 68. Equan Ards led the Warhawks with 15 points, and Trevon Chislom added 11.

For Platteville, Carter Voelker led all scorers with 21 points.

After the game, Austin Gates said there were still positives for the Warhawks to look at even after such a tough loss.

“The younger players are starting to make some plays. Tonight, we showed that when we move the ball we’re pretty good. We just have to keep working,” said Gates.

Platteville’s Blake McCann also had good things to say about the Warhawks after the game.

“We knew they were going to come ready. You can’t look at the record. Especially in this league, everybody comes ready to play every night. [Whitewater] put in effort even without Kale,” said McCann.

In yet another close game, the Warhawks also lost to UW-Eau Claire, 49-47 on Saturday night. One of these days, these close games are going to go Whitewater’s way, however this was not that day.

Whitewater’s next game will be Wednesday, February 19 in Oshkosh against the Titans.