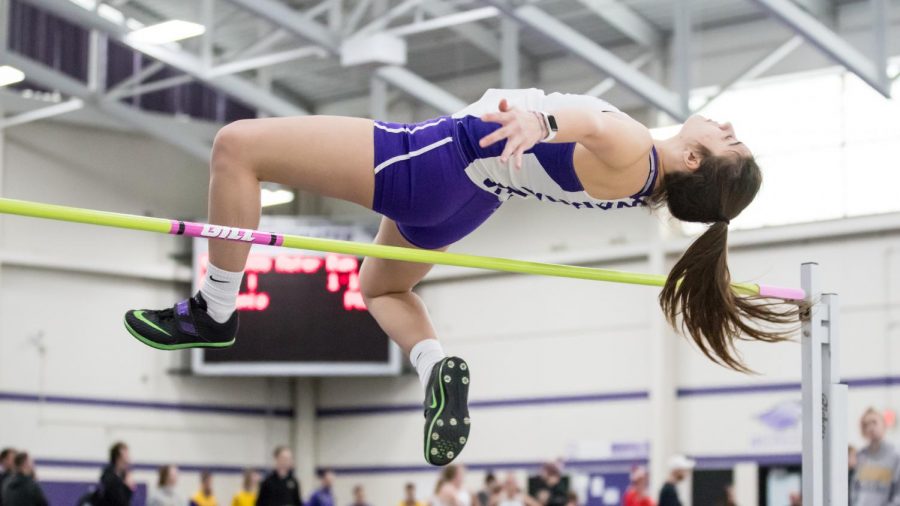 Miranda Reynolds competes in long jump for the Warhawks.

The UW-Whitewater Men’s and Women’s Track and Field teams kept their seasons moving forward as they competed in the Midwest Elite Invitational Saturday Feb. 15 in Whitewater.

This being their final home meet of the indoor season, both teams looked to leave their marks and gauge their progress as they faced off against conference opponents like UW-La Crosse, UW-Oshkosh, and UW-Stevens Point. The sense of urgency is heightened because of the impending conference championships in two weeks. This tournament represents the best opportunity for the Warhawks to measure themselves against the best of the rest of the WIAC.

The men’s team was very successful, taking third overall behind Washington University and Oshkosh, scoring 91 overall and beating out conference rivals La Crosse and Stevens Point. However, the women’s team struggled, taking last overall out of eight teams and only scoring 26.

Head coach Mike Johnson was pleased with both teams’ performances, focusing on the challenges ahead in the form of the conference and national championships.

“Happy with everything,” said Johnson after the meet on Saturday. “We had some kids that put up big qualifying marks for nationals, kids that improved their qualifying marks for nationals. That’s what we were trying to accomplish for this meet, and get them to really experience some things at a high level and get them ready for the conference meet.”

With that goal in mind, every meet that Whitewater competes in against conference opponents becomes more important.

“It really helps push me more,” said freshman long jumper Miranda Reynolds. “It’s not as fun if you don’t have people better than you. It helps motivate me more.”

Highlights for the Warhawks included in three events as junior David Fassbender took the 5,000 meter, senior Alex Duff won the 60 meter dash and senior Zach Jasinski was victorious in the pole vault. These events gave the Warhawks 10 points each, and helped them to accumulate their 91 overall points.

Other highlights for Whitewater included personal bests by many, including sophomore Kailey Reynolds who posted a personal record in the 60-meter dash running a 7.89, and junior Daustin Martin again breaking his own personal record in weight throw with a distance of 17.79 meters, good for second in his event.

“It went really well today,” said Martin. “I knew I was going to get a big win at the end. Terrible throw, just awful to look at, but just ripped on it and that’s all you need sometimes in the weight throw is just to rip on it.”

As they continue the sprint towards the conference and national meets, the Warhawks look to keep improving and performing. Their next meet will be in the Slick Invite hosted by North Central College.