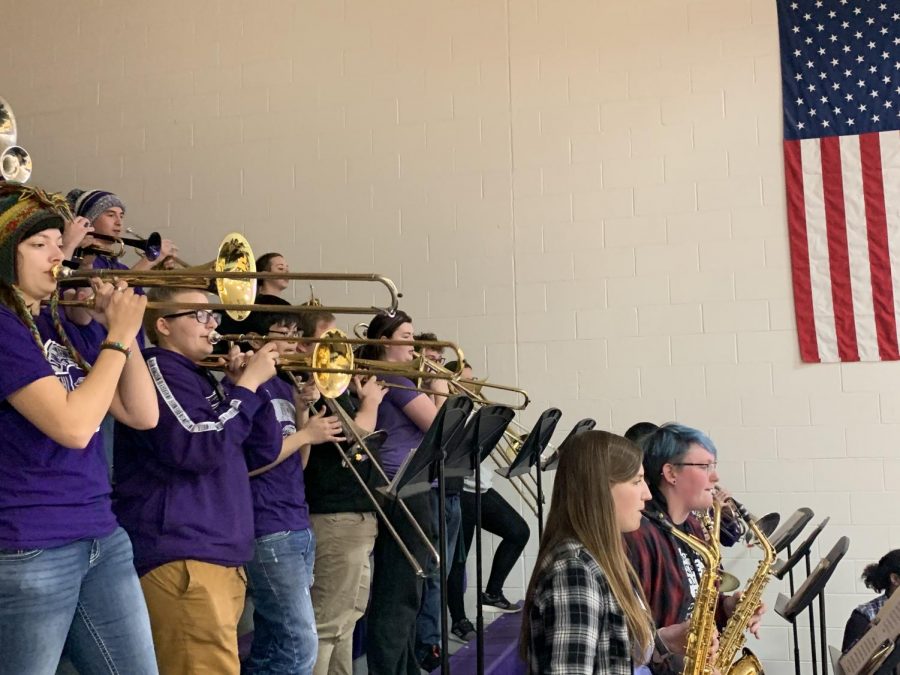 College basketball at any level features an atmosphere few other events or gatherings can match. There is a buzz around every game, with the crowd, the noise and the band – especially the band. For the University of Wisconsin-Whitewater, because statement proves more true as the pep band plays a large part in the feeling that you get when you walk into Kachel Fieldhouse for college hoops.

Since 2014, the pep band at Whitewater has made their presence known at Warhawk basketball games, entertaining crowds with hits like “Thriller,” ”Timewarp,” “Crazy Train” and much more. On top of providing musical entertainment before, during and after the game the band‘s chants and near heckling of opposing players adds a home field advantage that other teams have to face when traveling to Whitewater.

“It gets everybody involved,” said Traci Pinzon, a conductor for the band and also a music student at Whitewater. “We’ve gotten the basketball players involved before. We have a lot of fun with them.”

While getting the players involved might seem wholesome, if you’re a player on an opposing team, it’s much less fun for you. The pep band’s chants and cheers pull no punches. If you airball a shot you’re going to hear about it, and not just right afterwards. The band will continue the chant until you make your next shot. Other cheers like “where’s your passport?” after a traveling violation, or just outright screaming during free throws can rattle or annoy a team.

And this does give Whitewater a true home court advantage like one you’d see in other college basketball epicenters like East Lansing or Durham. With no extremely active student section to speak of, the pep band in effect becomes the student section and they’re proud of it.

“We make a lot of noise,” said Andrew Reber, a trumpet player with the band. “We really like making a lot of noise, seeing the frustration in the other team. It’s why we do it. If they didn’t react it wouldn’t be funny.”

On top of providing entertainment for the crowd and being a source of consternation for opposing players, the band also gives its members a chance to go to games, be social and enjoy the experience.

“Usually I don’t have time,” said Riley Kuldow, a freshman in the band whose voice was hoarse from cheering and yelling during the Girl’s Basketball team win against Oshkosh to clinch the WIAC championship. “I really would like to because the girls games are fun to watch and the boys games are always so close. So when I play I really enjoy being there. To me being in the band means getting closer with your future colleagues and having a great time.”