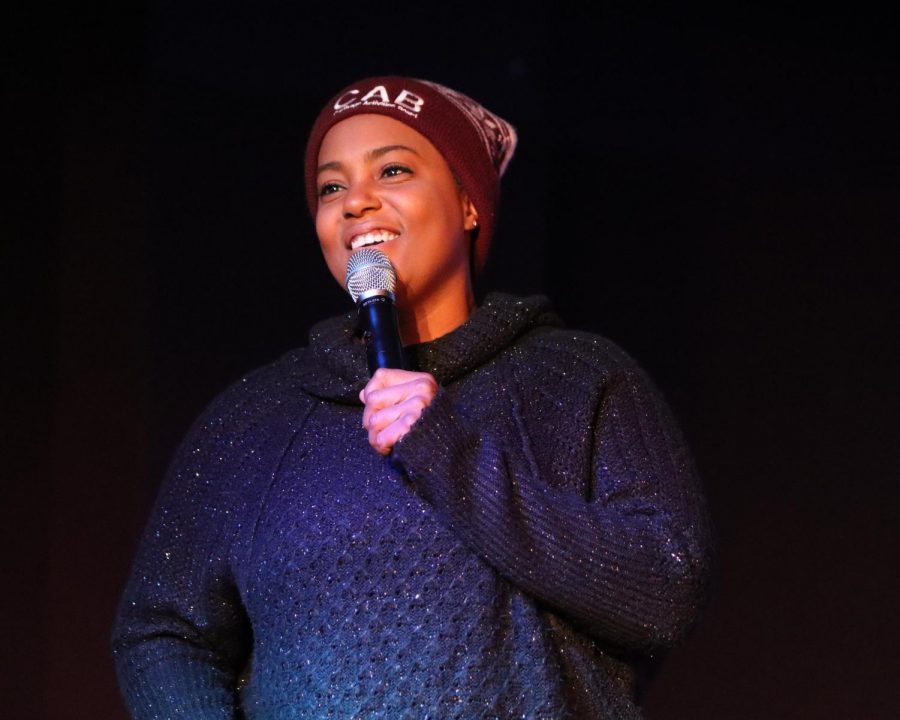 A slam poet named Lady Caress combined beatboxing, spoken word, and comedy, at the UC Down Under to entertain and relate to audience members Feb. 20.

Lady Caress recited a series of poems about her life as a child, her life now, black history, 90’s nostalgia and how she has overcome obstacles throughout her life.

“Sometimes… we think that because we feel like we’re struggling and we’re drowning, and because we feel like that, we actually are. But what we fail to realize sometimes is that your struggle is actually one of your strengths, and sometimes you have to go through that struggle to get to your next destination and not stop kicking my feet and not stop flapping my arms,” Lady Caress said during the performance.

She used a style unique to her, starting many of her pieces with a beatboxing chorus, continuing with a spoken word poem, and sometimes re-emphasizing the beatboxing chorus throughout the piece.

“Lady Caress blew my breath away with her genuine personality and incredible storytelling. It was an awesome performance that had me crying, laughing, motivated and all of the above,” said audience member Gabby Torres.

Lady Caress spoke about how she went to 13 different schools in 12 years and how bullying was a prominent negative aspect in her life that has had a huge effect on her personality today. But many students in the audience related to her poem on the effects of bullying.

“…her bullying poem, omg. I was trying so hard not to sob,” said Torres.

Early in the show, Lady Caress stated that she wanted to get to know the audience a little bit better, so she had them play a game of “Never Have I Ever”. It encouraged audience members to get engaged actively in the show and it was a fun way to allow those who didn’t know each other in the audience to relate to one another.

Lady Caress, originally from Arizona, entertained and moved the audience in so many ways with her relatable content and inspiring words.

“Find your local coffee shop. Find a club; something, and get out there. That was the hardest part for me because a lot of people. They write but they’re afraid to pit. Sharing is all the joy. Get past your moments of uncomfortability, and get on that stage and share,” said Lady Caress when asked if she had any advice to those who wanted to get into slam poetry.

Fans can find many of her poems on YouTube and Instagram, and one of her more powerful poems was featured on PBS to celebrate Black History Month.