Campus commits to helping the environment 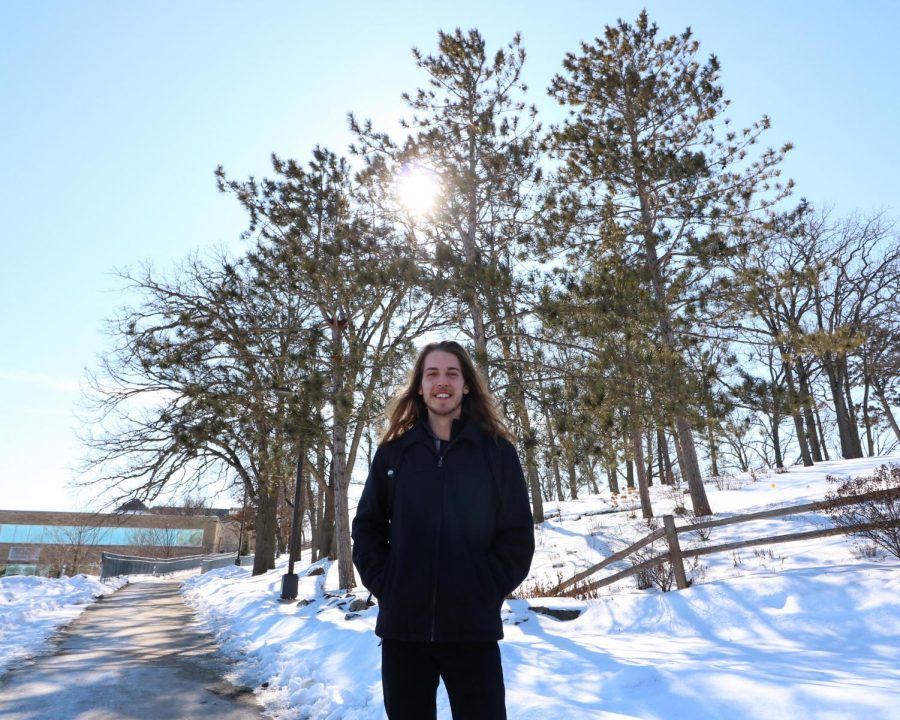 Jonathan Roberts is an avid advocate for the environment. Roberts also works in the Sustainability Office as a sustainability assistant.

The University of Wisconsin-Whitewater has taken its first step toward implementing climate action plans in an effort to combat climate change.

The UW-Whitewater Climate Commitment and Action Plan Act was passed by both Whitewater Student Government (WSG) and Faculty Senate in an effort to receive Chancellor Watson’s signature.

Jonathan Roberts, a fifth-year at the University of Wisconsin-Whitewater, has been an advocate for the environment for many years. He submitted the bill to WSG and the Faculty Senate in the hopes of getting it all the way up to the chancellor’s office.

“The purpose of the bill is essentially to start the conversation on campus on how climate change is going to affect us and what we should be doing about it,” Roberts said. “It didn’t inherently mean that we should do anything specifically besides signing onto a climate commitment, which is just the beginning of that conversation.”

Prior to this climate commitment, not much had been done in regard to addressing climate change on campus, according to Roberts.

“We have signed onto similar commitments in the past through different chancellors, but [this bill] provides a framework for us,” he said. “It’s something that will hold the chancellor accountable.”

While working on his bill, Roberts took into consideration the current state of the university, critically thinking about how this climate commitment could have a positive impact on the current budget issue.

“In my mind, I’m thinking [about] how can we take this crisis that we’re contributing to, in terms of the climate, and the crisis that we’re facing in our budget and somehow make those not mutually exclusive,” he said. “How can we use this commitment to take action on climate change, to increase enrollment or cut costs and generate revenue from renewable energy projects or increased energy efficiency?”

Roberts began working with members of WSG to help draft and submit his bill to the senate floor. With two other submitters and seven sponsors, the Climate Commitment and Action Plan Act was positively received, with a vote of 20-1.

“I am proud to have sponsored the climate bill last semester,” said Sen. Davin Stavroplos, a sponsor of the bill. “At a time when humanity is faced with the grim repercussions of our treatment of the environment, I believe it is necessary that every college campus play its part and make the necessary changes to meet what will certainly be the greatest challenge that we’ve ever faced.”

Following the approval of WSG, Roberts went to the faculty senate, where he worked with Eric Compass, James Hartwick and Jonah Ralston. It passed unanimously.

After getting his bill passed by both WSG and the faculty senate, Roberts achieved his goal of getting the act signed by Chancellor Dwight Watson. Watson had caught word of the bill, and saw how the commitment aligned with many of the campus’s core values and recognized that this bill can act as a way to further advance the university as a whole.

“As chancellor of this exceptional university, I’m proud to sign the Climate Commitment and to work with our students, faculty and staff to reduce our impact on climate change,” Watson said. “Service and social responsibility are among the core values of [the University of Wisconsin-Whitewater]. This commitment aligns with those values and provides a framework for us to move forward and implement strategies to reduce our emissions and adapt to the projected impacts of climate change. Not only is this ethically the right course of action, the Climate Commitment has far-reaching benefits that include energy and budgetary savings and public health improvements. I commend our students – and the Sustainability program – for their leadership, enthusiasm and dedication to this effort.”

Even with the chancellor’s signature, Roberts knows that there is still much more work to be done. He plans on taking his bill to the remaining shared governance groups on campus to continue to spread the word and raise awareness on the issue.

Roberts discussed how important it is to act on the issue of climate change before it’s too late.

“There’s an urgency. We only have so much time to act on this issue. The scientific consensus now is that we [have to] reduce our carbon emissions by 20 or 30 percent within this decade,” he said. “There’s immediate things that need to happen.”