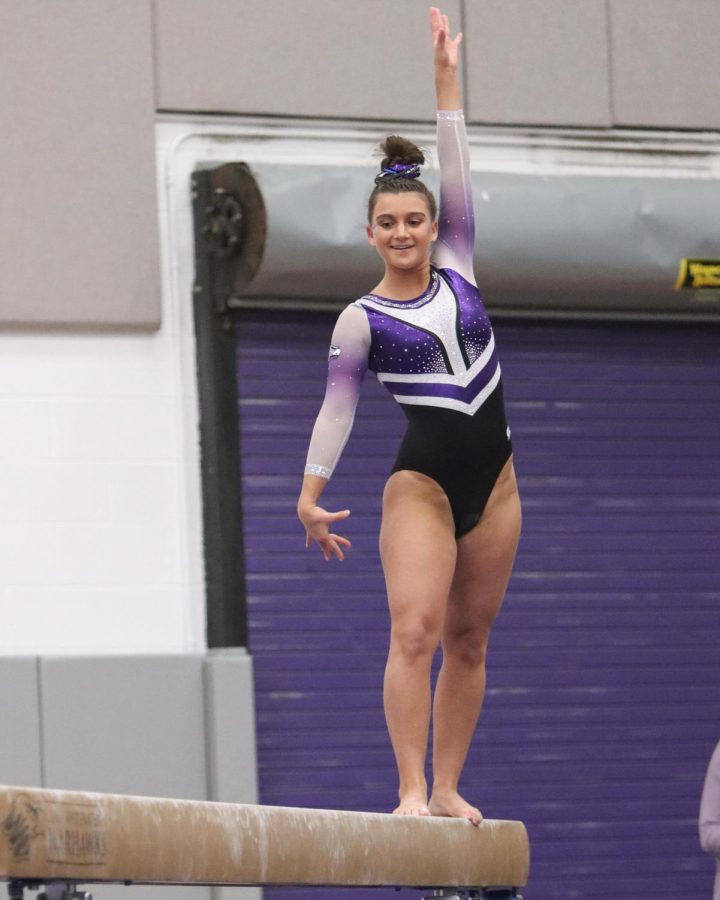 Vanessa Olinger stabalizes herself on the balance beam during her performance. She finished with a score of 9.450.

The Warhawk Gymnastics team gave their fans a Senior Night to remember as they narrowly beat UW-La Crosse in a close meet with a 192.125-191.975 win on Saturday.

Propelling them to the win, Whitewater got first place performances from junior Blaise Wilson in the All Around competition and senior Lauren Marshal in the Vault. Wilson also took second in the Balance Beam and freshman Karina Sabol took second in the Floor Exercise lead the team in its season high score in the event.

Head Coach Jennifer Regan was very pleased with her team’s effort in the win.

“This group has been a part of great successes and they have always pushed themselves.” said Regan. “No matter what I needed from this group they have always produced. These seniors have created a great team chemistry. They have learned from everyone before them and have done a great job contributing to themselves but also the rest of the team.”

There was a special energy throughout the arena as the teams competed in the last meet before the conference championship. The air was filled with excitement and energy and for the seniors, something else as well.

“This is bittersweet. We came out and competed very strongly against a tough competition. We represented each other very well,” said senior Lauren Marshal. “This will be my last competition of my career at home here in Whitewater and that truly is sad, but I will not remember the scores and stats, I will remember the great times that I have had with my teammates, creating our very own chapter in Warhawk history.”

While the focus was on winning the meet and performing well, there was also an emphasis from the team on enjoying the last meet in Whitewater for the season.

“We went out there and told our team to have fun. We usually do our best when we have fun and that was what we stressed to our players,” said senior Acacia Fossum. “We wanted to care more about having fun than anything and we were able to put together a strong performance, hitting all of our routines. Moving forward is a hard pill to swallow and it hasn’t exactly hit me yet.”

Moving forward is what the team has to do, however. As they travel to the WIAC championship on March 7 with hopes of earning a spot in the NCGA national tournament in New York.