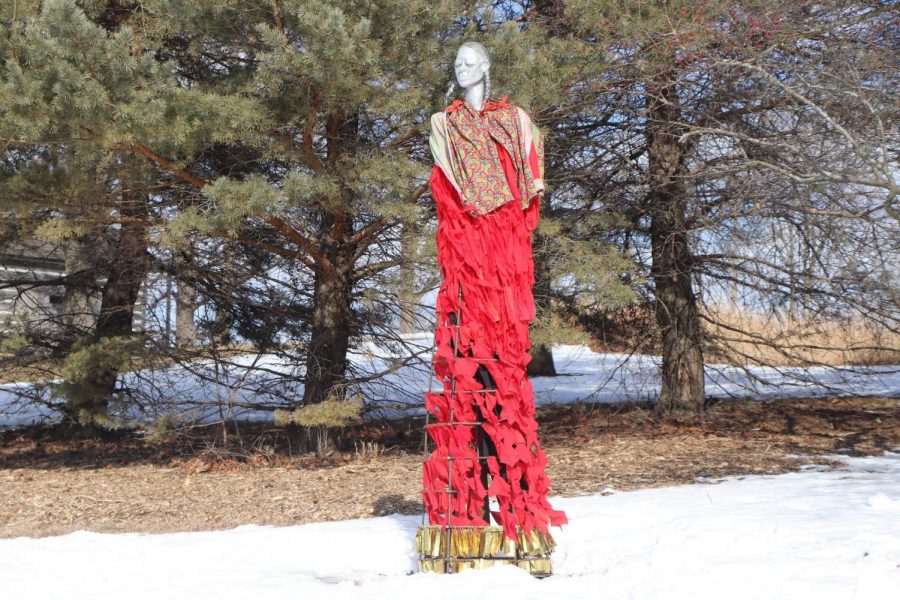 The Stolen Sisters sculpture, located between the Center of the Arts and UW-Whitewater's Observatory, depicts the names of some missing indigenous women.

Students with the sculpture department finished their 6-week-long sculpture with the intention to bring awareness to missing and murdered indigenous women.

The project began during the second week of classes and was installed by the Center of the Arts around noon on Tuesday, Feb. 25.

“The hope with this sculpture is that more people will be made aware of this issue and that the broader awareness will result in some of these women being found and some of the mysteries being solved and, certainly, less of it happening because there is more knowledge and more eyes,” said Teresa Lind, a UW-Whitewater Sculpture professor.

The sculpture works in conjunction with the “Stolen Sisters” exhibition, and the ideas for both the sculpture and exhibit came from metals professor, Teresa Faris and Nieves Galvan, a Native American audit student. Faris also assisted with the construction of the sculpture.

“It the sculpture is part remembrance of them and part spreading awareness of what they’ve gone through and why it needs to stop,” said Alexa Patterson, one of the students who worked on the sculpture.

The sculpture honors missing Native women by displaying names of missing and murdered indigenous women on red fabric squares that can be seen close-up.

“Just seeing it finished and outside was breathtaking. The whole experience was powerful and I learned so much I didn’t know. I feel like it has been an extremely moving experience,” said Bethanie Pollnow, another student who helped with the sculpture.

Early in the semester, Faris reached out to Lind and asked if her students would be interested in creating a sculpture related to the “Stolen Sisters” exhibition.

In the second week of classes, Professor Lind passed on the invitation to her classes and six students volunteered.

“It was an honor to be included in such a powerful and important exhibit,” Lind said.

The sculpture is of a woman standing roughly ten feet tall, her hair in braids, wearing a patterned shawl and a bright red dress made of long strips and squares of cotton. At the hem of the dress are golden squares. In certain indigenous cultures, the color red is believed to be the only color spirits can see, which makes the sculpture that much more meaningful.

“Thousands of women are going missing or killed and we need to help them. We need to all protect each other. We may not have this common here, but what happens when we graduate, or our children someday? If we can make a difference now to save us or our children later, wouldn’t you do that?” said Pollnow.