Wrestling takes third as they send four to Cedar Rapids 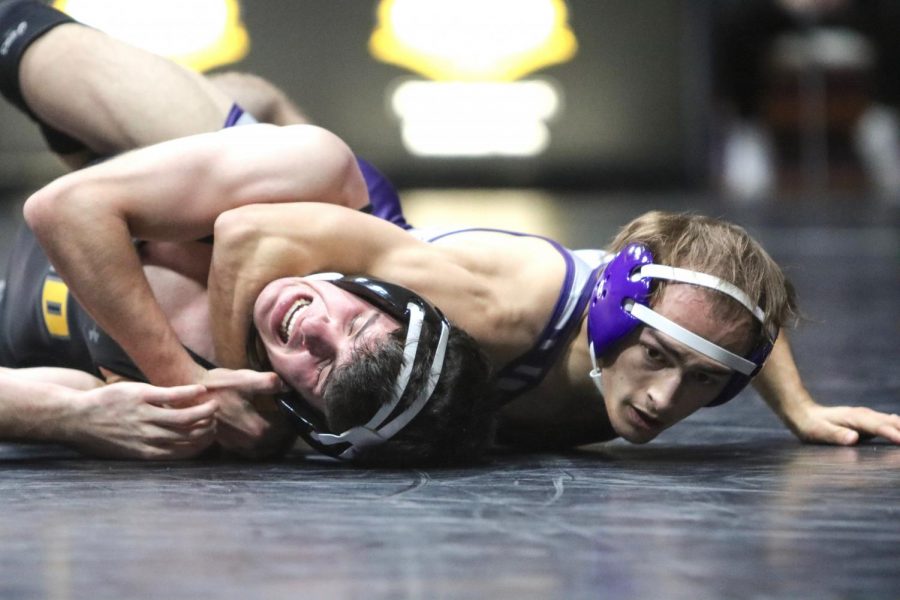 The University of Wisconsin-Whitewater Wrestling team sent four wrestlers to the national tournament as they took third while competing in the Upper Midwest Regional at Augsburg University over the weekend.

Mike Tortorice, Hazen Rice, Jarrit Shinhoster and Ryder Sigler were the four Warhawks who punched their ticket and qualified for the National Tournament. Giving each of them the chance to compete for a national title, some for the second time.

The success that these four saw was not easily won however, as the wrestlers on No. 15 Whitewater were competing at a regional that featured many of the top 25 schools in the Div. 3 wrestling world. Among these were No. 2 Augsburg, No. 13 La Crosse, No. 22 Platteville and No. 24 Eau Claire. Also at the meet were many defending national champions also looking for a return to the national stage.

With the success his team saw individually and overall, Head Coach Mike Zwashca was pleased.

“I’m very happy with our four guys that qualified for the tournament,” said Zwascha. “Taking third place at one of the toughest regionals in the country is something to be proud of for our group.

While being pleased, Zwascha also acknowledged that this time near the end of the season is always a mix of emotions.

“It’s always a tough time of the year,” said Zwascha. “You see people fulfill part of their dreams getting into the national tournament and others fall short. It’s a bittersweet day.”

Among those who fulfilled a part of their dreams were of course the four Whitewater team members who advanced to the national tournament that is being in two weeks.

Tortorice, a senior, led his team in the meet,winning his second consecutive regional championship after going undefeated in his bracket. He won his first match by technical fall and finished off his weekend with two pinfalls to clinch a first place showing.

“He came out real focused, lots of energy,” said Zwashca on Tortorice’s performance. “He wrestled smart, wrestled hard and took care of business. This is one more step on the way to him becoming national champion.”

Seniors Rice and Sigler, and sophomore Shinhoster also posted great performances, each taking second in their respective brackets. For Rice and Shinhoster, they look towards their second appearances at nationals, while Sigler is making his national debut. For each of them, the feelings around what the next two weeks of preparation mean vary.

For Shinhoster and Rice, determination and focus was the atmosphere surrounding them.

“I’m glad I qualified,” said Shinhoster. “I’m very excited. Our preseason starts early and ever since our first competition I could not wait for nationals. Everyone there worked their butt off and wants to be number one. I need to work even harder and raise up my intensity. That’s what I’m going to do in these next two weeks.”

“Finishing my career out as a national champion would be amazing,” said Rice. “I’m hoping to end up on top at the end of the next two weeks. I’m just focused on what I have to do. I’m definitely going into it pretty confident.”

For Sigler, the tone is different as he’s reaching his first national tournament in his senior year.

“I’m obviously a little nervous for it,” said Sigler. “It’s my senior year so I got to go out and give it my all. I’m just going to have fun with it and see what happens.”

Tortorice, Rice, Shinhoster and Sigler will cap off their seasons being cheered on by their teammates and coaches as they travel to Cedar Rapids and compete in the national tournament on March 13 and 14.