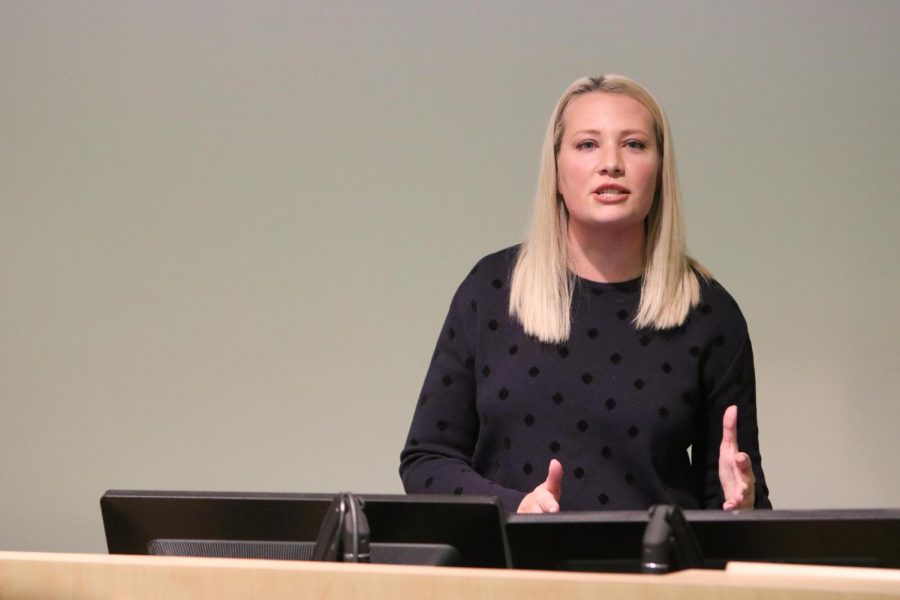 Elisha Krauss speaks to students about the need for broader free speech rights.

College Republicans called for greater free speech with a presentation hosted by guest speaker Elisha Krauss of “The Daily Wire.” The event, which took place on Tuesday, March 10 at 5 p.m. in Upham Hall, asked for more free speech on college campuses with  Krauss pointing to “leftist media” as a deterrent to free speech.

“I think, if anything, we can have people consistently rising up and saying ‘No, I’m writing your check.’ Like I can say what I want and it’s wrong for you, like I mentioned, to abuse your power to shut me up because you disagree with me,” said Krauss.

In his opening statements at the event John Beauchamp, chairman of the UW-W College Republicans, claimed that the right to free speech is being challenged. The event was aimed at encouraging attendees to fight for right-leaning, conservative speech.

“A lot of people grow up with the saying that this is a free country therefore all speech is free and they can say what they want. However, there are limitations in place to protect others from what we say, especially regarding hate speech and slander,” said assistant professor of Communication Keith Zukas.

In her speech, Krauss went on to elaborate on this fight for rightist speech. At numerous points throughout the speech, she accused university faculty and media organizations of political bias, as well as forcing beliefs on the general public.

“They have wrongly been labeling Republicans as Nazis,” Krauss said.

Krauss alleged that this was the reason for several of her speeches at public universities being canceled, although she was allowed to speak at UW-Whitewater. The journalism professor at the University of Mississippi at the time, Curtis Wilkie, stated that the cancellation was due to the building’s policy, which does not allow events from either conservative or liberal organizations. However, Krauss continued by saying that the university was afraid of her inciting hate and violence with her speeches.

“My thoughts, my words, and my speeches are not violent or hateful,” Krauss claimed.

She also stated that she does not understand how words can be violent.

“Speech is generally considered free and well protected until it amounts to a slap in the face, verbally. Then that constitutes verbal aggression and can be prosecuted. Today, this can even include hand gestures like the use of middle fingers to show anger.”

In a general email to all event attendees, John Beauchamp said, “This year we are focusing on civil discussion as well as bringing in speakers to speak on a variety of topics. We always welcome anyone to join us at our events on campus, regardless of your views!”

The UW-W College Republicans did not respond to requests for comment for this story.