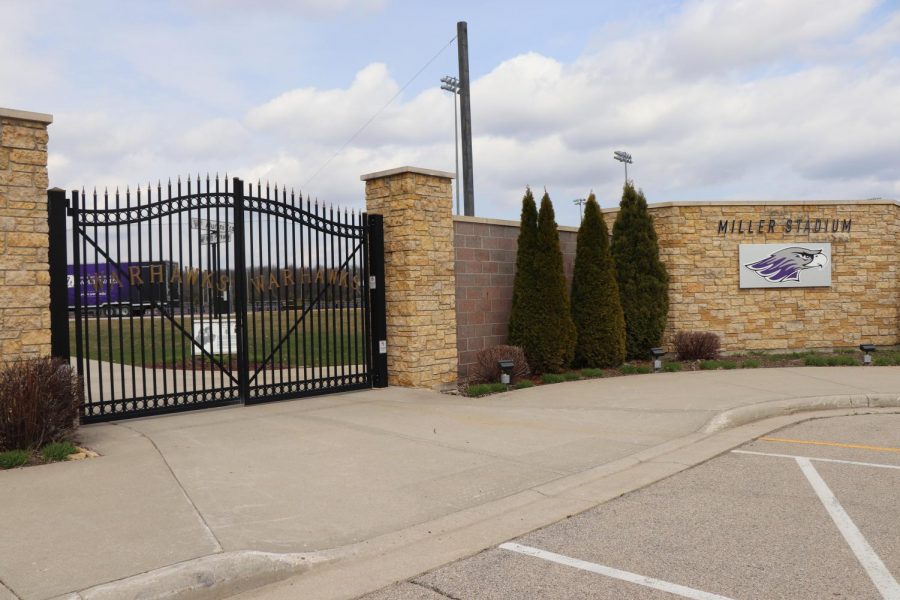 Miller Stadium, home to Warhawk Baseball, will remain closed for this spring as the season has been cancelled due to the COVID-19 pandemic.

The 2019-20 coronavirus (COVID-19) pandemic that has swept across the globe in the last few months has not only had a significant impact on public health, society, and the economy as a whole, it has also wreaked havoc to the sports calendar. Sporting events and seasons have been suspended everywhere to limit the spread of the virus. Even the Summer Olympics, typically one of the world’s most-watched sports broadcasts, has been pushed back a year. Because of COVID-19, the men’s baseball season was called off after just three games.

Last year, the team finished with a 35-12 record and were crowned WIAC season and conference champions. Although their record may seem very solid, the team wasn’t satisfied with how the season finished. Matt Korman, a sophomore on the team, said that “our expectations always start simple with winning one game at a time, but we always expect to win our conference as well as the regional, super-regional, and ultimately make it to the College World Series, but last year we weren’t able to do that.”

The team lost a number of key contributors after last season. Korman said, “we lost some key seniors in our starting pitcher Mike Kaska, starting catcher Mike Aiello, starting second baseman Nick Schrader, and starting third baseman Cal Aldridge. There were also some seniors and players that were a big help to our program throughout the season.”

The team always has extremely high expectations for themselves. Junior Bryan Sturdevant said, “participating in athletics at the University of Wisconsin-Whitewater, you are expected to compete for a conference, regional, or national championship every year. With the season in the really early stages, we were just taking one day at a time and trying to get one percent better each day, but we were very confident in what we could do this season.”

The coaches and players have still remained in touch via group chats and video chatting. Korman said, “we’re still communicating as a team, our coaches have sent out emails trying to keep our spirits up and positive. Along with email, our coaches have preached to stay healthy and be prepared for when we are back to campus. As for the players, we’re always talking about how much we miss each other and how we wish this year wasn’t taken away from us. Of course, it’s a lot of laughs and jokes as we try to stay positive and connected as much as we can at this time. I’m really fortunate to say that the bond I have created with these guys over the years is something that will last forever.”

In terms of staying in shape, the players have made it a priority to stay active and try to transform themselves into the best possible athlete and person they can be.

COVID-19 has affected some of the players mentally as well. Korman said, “This whole situation and the world we’re living in now with COVID-19 has really made me realize a lot of the things we take for granted. Baseball at this level is not something I take for granted, but being with my teammates day in and day out to compete is what I miss the most. I know now that I love and miss the game more than any other time in my life and cannot wait to be back in Whitewater when the time comes.”

Sophomore Taylor White said, “I think it just shows that baseball or sports, in general, are not invincible and will not always be around for me. I have dedicated so much of my life to this sport and it’s difficult when it comes to such an abrupt end. It has really made me come to realize that I do not have a lot of time left to play this game, so I know that I have to take in every moment I get to play.”

Bryan Sturdevant said, “COVID-19 has definitely changed the way I think about baseball, and just competing in general. Being an athlete, I am always trying to find ways to compete and when something like a season that you worked all year forgets taken away from you so suddenly, it really opens my eyes to things I was potentially taking for granted. It’s easy to find yourself thinking or saying how tired or drained you are during the season, but I would do a lot just to have that feeling right now.”

This is an odd time for everyone, but the team’s mindset hasn’t changed: continue to take it a day at a time, because that’s all anyone can do.