Wrestling team left wondering what could have been 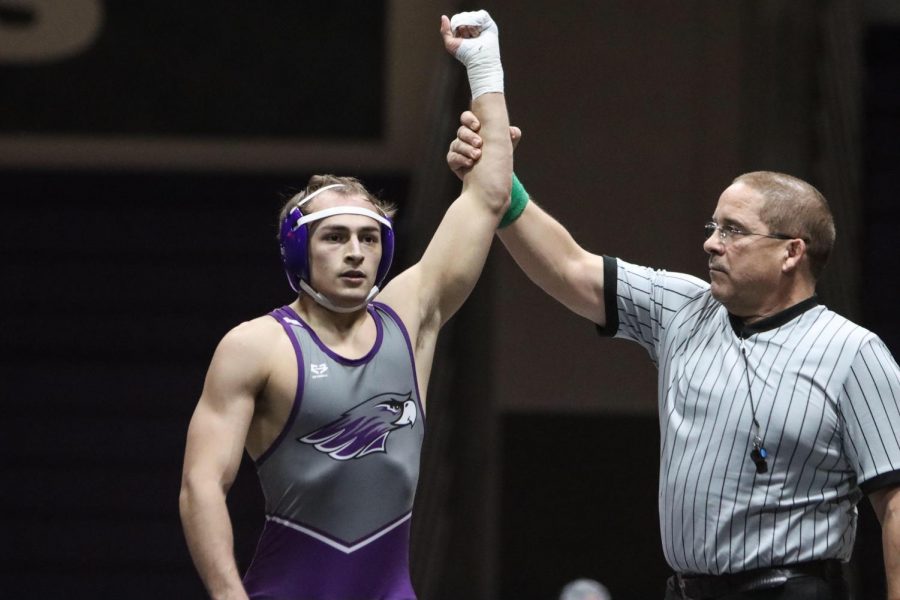 Senior Mike Tortorice has his hand raised in victory after a previous match this season. The senior was headed to the national tournament before it was cut short.

In Cedar Rapids, Iowa members of the University of Wisconsin-Whitewater Wrestling team were in their hotel awaiting the 2020 NCAA Division III Wrestling Championships. They had just finished eagerly preparing for the tournament, for which they had sent four wrestlers – three of whom were favorites to win national titles in their weight classes. But those wrestlers never got a chance to compete. The tournament was canceled by the NCAA on March 12, a day before the tournament was set to take place, due to COVID-19.

Seniors Hazen Rice, Mike Tortorice, and Ryder Sigler, and sophomore Jarrit Shinhoster had completed a successful 2019-20 regular season and had qualified for the national tournament. Rice, Tortorice, and Shinhoster were veterans of the tournament and were thought to be among the favorites for titles at their weight, while Sigler was making his first national appearance.

These wrestlers were excited to compete. And while there had been discussion of the tournament being canceled, especially after the NCAA’s cancelation of the Division I tournament, many still believed it would go on as planned or with some measures in place. This all changed when head coach Matt Zwaschka announced in a team meeting that the tournament had been canceled, and that the wrestlers should pack their bags and get ready for the drive back to Whitewater.

“It was just disbelief,” said No.2 ranked Rice at 141 lbs. “It was a rough next few hours packing up and heading back to Whitewater without even getting to wrestle.”

For wrestlers like Tortorice, who was the No.1 ranked Division I wrestler in the country at 125 lbs., he couldn’t believe what he had heard.

“I was absolutely devastated,” Tortorice said after hearing the news. “I had to leave and take a walk. I instantly called my family to tell them the news that my dream of being a national champion would never be actualized.”

The feelings of disbelief, devastation, and anger are still present for some over a month after the tournament was scheduled. For the wrestlers- especially the seniors- losing out on the chance to compete was very tough to process and get through.

“As of right now, I’m still absolutely crushed. I dedicated so much time and effort into trying to be a champ, and for that to have been taken away right at the end was beyond heinous,” said Tortorice over a month after the tournament’s cancellation.

There was a glimmer of hope, however. As soon as the NCAA had started to cancel postseason tournaments across the country, a campaign of sorts had begun to advocate for seniors of winter sports to get another year of eligibility. For the Warhawk seniors, this would mean another shot at a title.

For Rice and Tortorice, while wrestling as a Warhawk again may not be in the cards, both have expressed the possibility of returning the Whitewater to assist in coaching the next generation of Warhawk wrestlers while also acknowledging the difficulty of being reminded of the chance they never got.