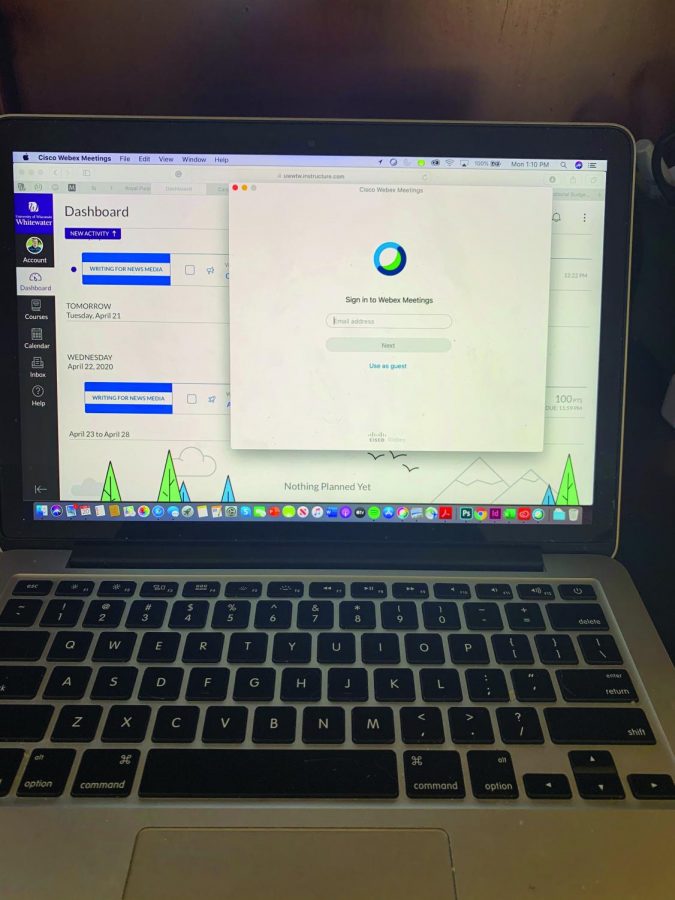 As the university transitions to remote learning for the remaineder of the spring 2020 semester, many students are using Canvas and Cisco WebEx to complete their courses.

In what has been described as a historic semester, the students of the UW-W were sent home a week before their spring break to help slow the spread of COVID-19. Originally the plan was to take the weeks of March 15-29 off, for students to have their ‘spring break’ and to give instructors time to prepare to move their curriculum online. This online portion was initially only supposed to last until April 17, when another decision would be made to either send students back to campus or to spend the rest of the semester online.

On March 18 Chancellor Dwight Watson made the call to move the remainder of the semester online.

“I believe that it is vital that our community do our part to help stop the spread of this virus. It is our compassionate duty to make sure that our campuses are as safe as possible,” said Watson in a statement sent to the university.

Following Chancellor Watson’s message, Wisconsin Gov. Tony Evers enacted a safer at home order March 24 that would last through 8 a.m. on April 24, which has now been extended to May 26. This ensured that the Warhawk community would be spending the second half of their semester completely online.

Sophomore Olivia Maier was one of the students who’s previously taken an online class, so she thought she was able to adapt moderately quickly to the change.

“I’ve taken online classes before, so it’s more of the fact that I now have five of them instead of the two I originally signed up for,” she said.

“I’ve also been more understanding to teachers. This has been hard for them too. I feel that I can email my professors whenever and they will get back to me as soon as possible. I feel that classes have become harder, but it’s more that I would rather be in a classroom setting than having to be in online discussions.”

In classes where computer programs were a necessity, students now have additional resources to help them, such as access to all Adobe software on their personal computers.

UWW’s Instructional, Communication & Information Technology (ICIT) team has received an increase in technology requests, often helping students via over the phone or email, instead of traditionally meeting with them on campus. They also work with the Learning Technology Center to help staff transition to this online portion of the semester.

ICIT is committed to assisting with all technology, as well as aligning campus technology with the university mission and strategic plan. Dane Seckar-Anderson, the senior communication specialist and Melissa Smiley, Assistant Director of Campus and Learning Technology, believe these commitments they made are especially important to uphold now with the world changing every day – especially for students’ technology requests during the pandemic.

“As the campus has moved to alternative delivery and remote work, we have had an increase in technology support requests. Thankfully, we were well prepared. We developed a Remote Resources Site which has new content added daily, the Help Desk and LTC have continued to provide support through phone, email and Webex meetings, and we have also been working directly with students and staff who may not have access to a computer, the internet, or other essential items for working and learning remotely,” Seckar-Anderson said.

Faculty and staff are doing as much as they can to smooth the transition as well, but some may be facing difficulties of their own due to not having taught online classes before. They are offering online office hours through Zoom, Cisco WebEx, or other forms of communication.

They have extended deadlines for assignments, offer additional help and week-by-week guides for students who struggle to balance this new academic transition.

“In anticipation for safer-at-home scenarios and emergency remote teaching, the Learning Technology Center began preparing for workshops, training, and consultations to help faculty move their courses into the alternative learning format. With leveraging the tools LTC supports, the team has been able to continue the consultation process with Webex, and a variety of features supported in the tool,” said Smiley.

Though this is difficult for many, UW-W has shown that it is continually going to be there for its students, whether in person or online.