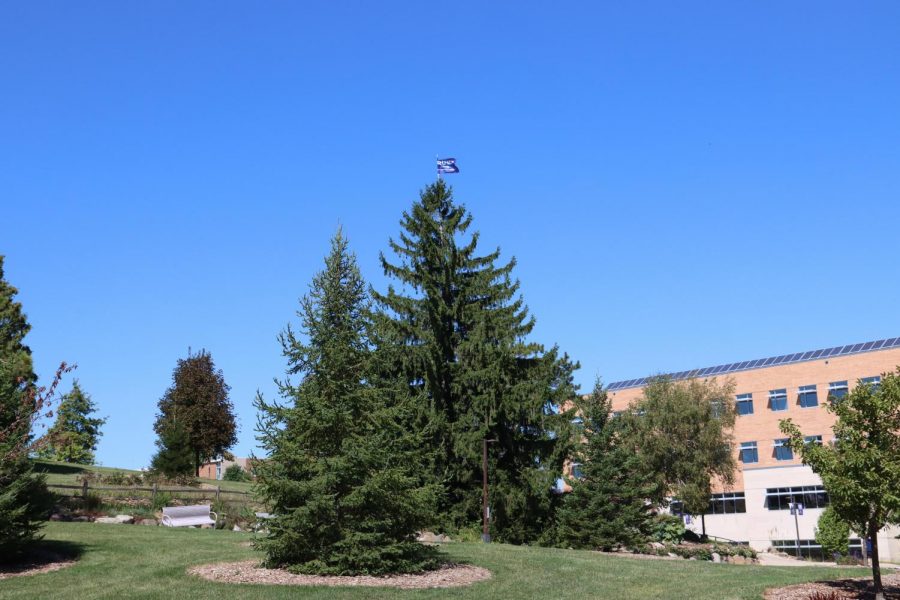 A campaign flag was placed at the top of an evergreen tree near Hyland Hall on the University of Wisconsin-Whitewater campus on Wednesday. Sept. 2.

The campus opened to the first day of classes with a presidential election flag flying atop an evergreen tree near Hyland Hall Sept. 2. The flag violated UW System guidelines for political activity, prompting a police investigation and university email announcement.

“Once we found out about it, I contacted Facilities Planning and Management to ask if their grounds unit could get somebody over there to take it down,” said University Police Chief Matthew Kiederlen. “The University policy is that that type of thing isn’t supposed to be displayed unless it’s specifically attached to an organization.”

The campus alert following the incident urged students to heed the guidelines set in place by UW System’s statewide Political activity on campus: Guidelines for the 2020 campaign document.

Individual students and student groups are allowed to show political affiliation on UW campus property when associated with a campus organization or during a pre-approved activity. But campus buildings and grounds are off-limits to those wishing to campaign for a political party or candidate at random, according to the document.

“Wisconsin Administrative Code UWS section 18.08(9), provides that no person may erect, post or attach any signs, posters, pictures or any similar item in or on a university building, except as authorized under institutional policies.”

The document states in section 2.3, “Campaigning is permitted in public areas at UW institutions, subject to institutional policies concerning the time, place, and manner for conducting such activities.“

“It has nothing to do with the candidate. It has to do with it being a political thing,” he said. “It’s nothing new. It’s happened on both sides of the equation in the past. It’s something we quickly recognize as not being appropriate, and we move to alleviate the circumstance.”

Though explicit political displays such as this flag are not permitted on campus, Kiederlen made it clear that students and organizations are encouraged to voice their political opinions in appropriate settings. Such instances would include setting up a table during an event fair or hanging a poster in a private dorm room.

The violation remains an open investigation, and Chief Kiederlen encourages those able to offer anonymous information to contact the UW-Whitewater Police Department at 262-472-4660.

For more information regarding the UW System’s guidelines for political activity on campus visit  https://www.wisconsin.edu/government-relations/download/Political-Activity-on-Campus-2020-08-31.pdf .