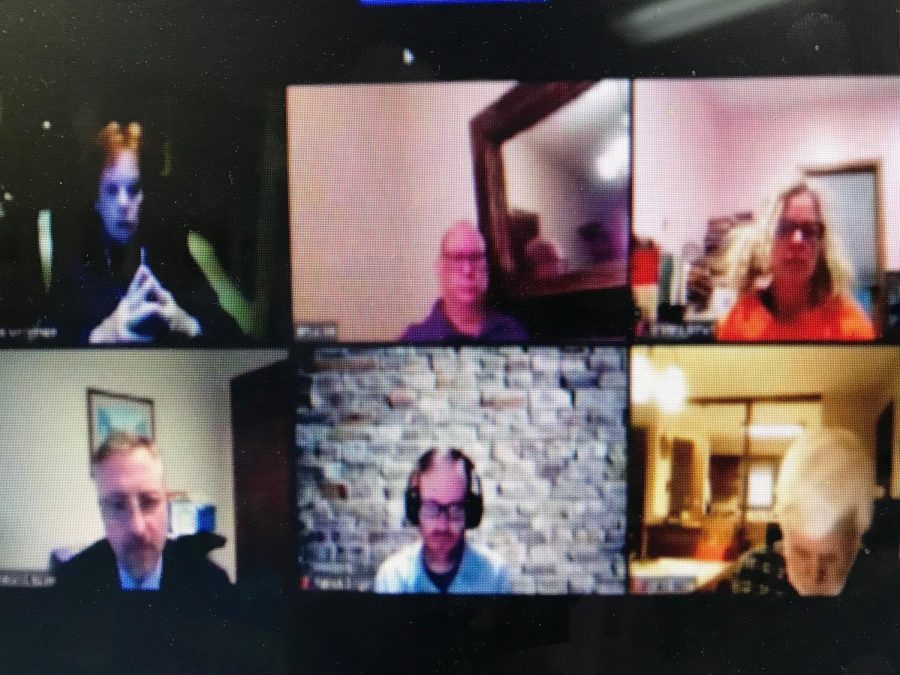 The Whitewater Common Council meets to discuss the rise in COVID-19 cases on campus.

The Whitewater Common Council met for a special meeting to discuss an ordinance prohibiting mass gatherings following concern over the rise of COVID-19 cases among UW-Whitewater students Sept. 9.

The proposed ordinance would have limited outdoor gatherings to 25 attendees and indoor gatherings to 10 attendees (with exceptions such as religious gatherings). It did not pass the vote that Wednesday nor at the following Sept. 15 regular meeting, despite pleas from UW-W faculty, students and Whitewater citizens.

“We had anticipated that with the return of students we would have a significant uptick in positivity, but when I reported on this before, I said that I felt we were in a situation of concern, not alarm,” said Common Council President Lynn Binnie. “I have to say, if we aren’t at alarm yet, we are getting very close.”

Prior to the vote, university leaders had appealed to the council about the common interests of the school and community. Much of the success of local businesses depends upon having students on campus, so if classes go remote and students return home before the planned date of Nov. 20, this economic cushion would depart with them.

Initially, the university felt it had no authority to enforce its Events Policy off campus. But by the time of the next meeting, UWW administration had alerted students of their intent to implement UW System policy UWS 17.08(2). This policy gives the Dean of Students Office the authority to discipline students both on and off campus if their actions put themselves or others at risk. However, without an ordinance permitting city police to substantiate citations, this kind of enforcement and prevention will likely prove difficult to enforce.

Hence why the city’s Common Council was called upon for support in holding citizens of Whitewater — students and non-students alike — accountable for their actions.

“For us to move forward and hold students responsible for their behavior off campus, we need a citation of some sort from our city police or we need individuals to report who are the hosts of these large gatherings. If we don’t have one or the other or both, it makes it very difficult for us to move forward and hold students accountable for their behavior and actions off campus. Our hands are tied in some ways,” said Dean of Students Artanya Wesley at the Sept. 9 special meeting.

Common Council President Lynn Binnie advocated the most support for the ordinance among council members, citing statistical concern. According to his own calculations, the percentage of positive cases in a fourteen-day period beginning Aug. 26 and ending Sept. 9 in the Walworth County portion of Whitewater was 24.9 percent. However, he also pointed out that these high calculations are in part due to the way in which the university is conducting testing.

“It’s to be expected that we would have a rapidly climbing positivity rate, since UW-W is only using the PCR [polymerase chain reaction] test for students who are either symptomatic or have been in close contact with someone who’s tested positive,” said Binnie.

This means that although the numbers seem high, there are few students getting tested who don’t show symptoms and whose tests would most likely come back as negative, thereby weighing out the statistics.

Still, Common Council members were hesitant to pass the ordinance, primarily due to the restrictions it would place on all citizens of Whitewater to be unable to socialize freely.

“The city is definitely willing to support the university in any way we can in their efforts to keep people healthy and safe. But it’s clear that as of last night [Sept. 15]. The common council at this point does not have interest in establishing any type of ordinance to help enforce what the university has put forward. That doesn’t mean that the city isn’t willing to help support the university in their goals — it just means that we’re counting on residents and businesses to follow [the mask ordinance]. We’re hoping and expecting people to heed the counsel we have provided in the past,” said City Manager Cameron Clapper.

Though the motion to limit large gatherings across the city was not favorably received, Common Council and UW-W will continue to work together to curb the rise in cases. Students and citizens alike are expected to follow health guidelines and obey the mask ordinance.

In their own campus-wide announcement, UW – Whitewater Student Government implored everyone to do their part.

“This is a critical moment in determining how the rest of our semester will look,” said President Johanna Wentworth. If you want to remain on campus — be smart and be safe.”