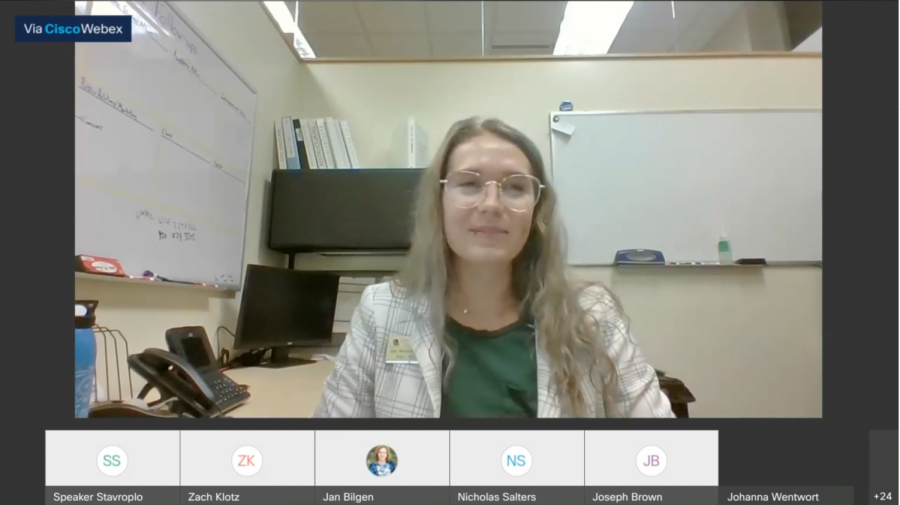 The Whitewater Student Government (WSG) met virtually Monday, Sept. 14 to discuss multiple matters such as appointing a number of new senatorial seats and concerns due to the COVID-19 pandemic.

“In a vote of 14 to 0 congratulations, Mr. Brown, on being named the next at-large senator of the Whitewater Student Government,” said Davin Stavroplo, speaker of the senate at WSG.

Stavroplo was referring to Joseph Brown, a transfer student from Western Technical College (WTC) in La Crosse. Brown has held collegiate political office before when he was elected student body president at WTC shortly before his transfer to the University of Wisconsin-Whitewater. Other positions Brown held at were are Executive Board Member, Chairman of the Executive Committee and Student Government Campus Events Coordinator.

A debate was held between Colin Chapman and WSG senator, Matt Schweinert, for the position of deputy speaker of the senate. In a vote of 10 to 4, Schweinert was able to win the seat.

Interim Chancellor Greg Cook made an appearance at the meeting, giving WSG an update on the COVID-19 situation on campus and on other campuses around the state. Cook expressed concerns about other UW campuses such as Madison and La Crosse having to quarantine residence halls and Greek houses for two weeks, moving face-to-face classes online.

“What we’re trying to do is get the word out,” Cook said. “We need to get the attention of all students if we’re going to save this semester. We need to turn the numbers around.”

The meeting wrapped up with the usual reports from different officials in WSG, most notably WSG president Johanna Wentworth. She stressed the importance of wearing personal protective equipment on campus and for WSG representatives being leaders in their community.

“As Chancellor Cook said, residence halls in La Crosse have been shut down, classes are remote, UW-Madison is remote for two weeks. Not to say that this will happen here, but our cases are rising. They’ve risen a lot last week. We need to step up,” Wentworth said.