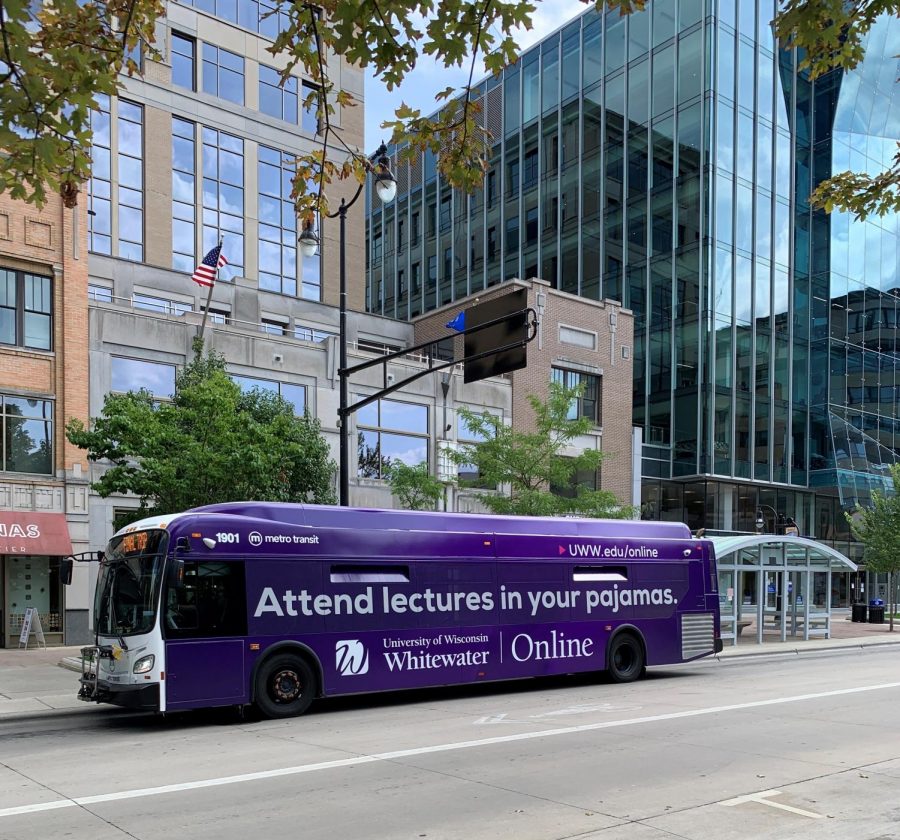 A city bus makes a stop on the capitol square in Madison advertising online classes at UW-Whitewater.

Advertisements for online classes at UW-Whitewater are circling the cities of Madison and Milwaukee on city buses. The ads were created by Shine United, based in Madison, which has hired many UW-Whitewater alumni over the years. Online program enrollment is up since the ads have been on the move.

Jason Jasinski coordinated this project with Shine United. Jasinski started working at UW-Whitewater in July 2016 as the marketing director for the College of Business and Economics. Many other UW-Whitewater employees worked together on this advertising project. Without Jasinski, this project would not have been a success.

Callie Yeoman is a UWW alumn and previous President of the Whitewater Advertising Association from Burnett, Wisconsin who studied advertising and integrated marketing communications. In 2016, Yeoman graduated with a degree in journalism and was hired at Shine United before graduation. It’s now been about four years since Yeoman started working for Shine United. On Aug 3, 2020 Yeoman got promoted to Digital Media Planner/Buyer. Yeoman was the media buyer for this project.

One of Yeoman’s professors, Kris Kranenberg, is proud of the accomplishments Yeoman accomplished through her career so far. Kranenberg taught Yeoman in two classes and was her internship advisor. Watching Yeoman become the professional she is today has brought lots of joy into Kranenburg’s heart. Kranenburg believes Yeoman’s involvement in Whitewater’s Communication Department gave her opportunities that helped her get where she is today. Yeoman was involved in the Royal Purple, Commvergence, and Whitewater Advertising Association while she attended UW-Whitewater.

“It’s such an incredible feeling to see a former student succeed”, said Kranenburg. “It’s fun to be able to watch alums as they start their careers and do what makes them happy.”

Shine United is a modern advertising company whose headquarters is in downtown Madison, Wisconsin. Their bold and creative approaches to advertising attracted the university’s business. Shine United doesn’t only do advertising. They also provide services in investment planning, analytics, and more.

If you are interested in online school through UW-Whitewater feel free to visit https://www.uww.edu/online. There are more than 40 bachelor’s degrees, graduate’s degrees, and certificates available fully online for students.