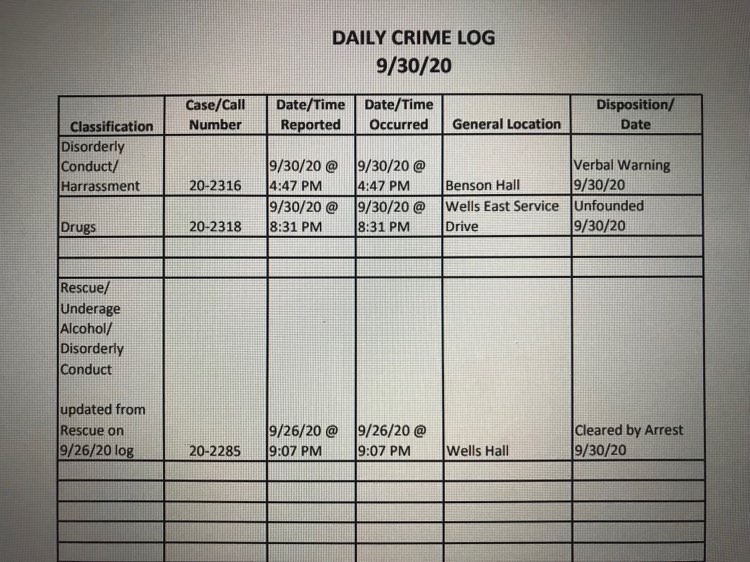 The UW-Whitewater campus police reported an array of on-campus crimes throughout the month of September. The reported crimes were added to the University Police website in daily and weekend logs.

The most abundant crime among students was drug violations (type of drug unspecified), at twenty cases for the month. Second in tally was Disorderly Conduct (again unspecified as to the exact activity), at twelve cases, and at third highest fell underage alcohol usage at nine cases.

Harassment was reported to have four cases, and Damage to Property had three.

Vandalism, Rescue, Weapons, driving with no headlights, driving while intoxicated, and Fraud each had two cases.

Sexual Assault, Stopping in Roadway, Internet Crimes Against Children, Graffiti, Theft, and Fire Alarm all had one case.

In the disposition note column, a case may be designated as Cleared, Cleared by Arrest, Inactive, Referred to a correctional source (such as an alcohol or marijuna diversion program), or Under Investigation.

The campus police continue to update their logs daily. To read the crime logs or others, visit https://www.uww.edu/adminaffairs/police/safety-reports-and-statistics/daily-activity-log.

Crime on UW – W’s campus in the month of September