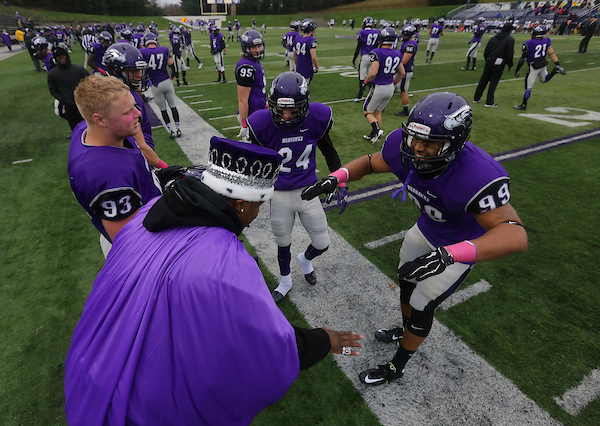 The 2009 season will not be forgotten anytime soon.

It was a season the UW-Whitewater football team dominated for much of the year.

It was a season where numerous team and individual records were broken.

And it was a season that ended in the most dramatic fashion on Division III’s grandest stage.

“It was the perfect end to the perfect season,” senior quarterback Jeff Donovan said after the Warhawks (15-0) defeated previously undefeated Mount Union, 38-28, in the national championship game in Salem, Va., last month.

Donovan is one of 19 seniors whose career as a Warhawk is over, but fellow senior Garth Coats isn’t thinking about that.

Instead, the center, who anchored the offensive line, is still celebrating the team’s victory over the Purple Raiders, a team that had won three of the last four national titles and 10 championships since 1993.

“It was a great experience,” said Coats, one of the team’s four captains. [I] couldn’t ask for a betting ending.”

But this latest chapter in UW-Whitewater’s storied football program did not begin when the Warhawks drove 15 hours to Dickinson State University (N.D.) for their 2009 season opener.

“We challenged them from the time we returned from [the title game] a year ago,” said Leipold, who was named the NCAA Division III National Coach of the Year. “We had the nucleus of a very good football team. It would just not happen overnight. [We were] going to have to put a lot of hard work in, some early mornings, some late nights. And this football team did that.”

With 18 of 22 starters returning from the national runner-up team in 2008 and its All-American kicker Jeff Schebler and punter also returning, defensive co-captain Troney Shumpert anticipated a special season for the ’Hawks.

But he said falling to Mount Union, 31-26, in last year’s Amos Alonzo Stagg Bowl added fuel to the fire.

“When we lost in 2008 that was a motivator to us to keep pushing and that’s something that was stuck in the back of our heads as the season went on,” said Shumpert, a two-time All-American. “We knew that we were a good team coming in, but you actually have to show it on the field.”

Donovan, on the other hand, kept Mount Union and the 2008 Stagg Bowl in the past and saw no reason to look back.

“I didn’t think about it, other than a couple days after it happened,” Donovan said. “Never did it cross my mind during the season. It was a totally new mission. The last thing I wanted to do was think of a loss last year. We just looked forward. We went out and took care of business.”

The ’Hawks defeated their opponents by 24 or more points and scored at least 35 points in each of their 10 regular season games.

As a result of its dominating play, the team did not have to break a sweat on its way to an unprecedented fifth straight WIAC championship.

With home-field advantage throughout the playoffs, the ’Hawks never had to leave the friendly confides of Perkins Stadium – a place where the team has only lost one time in the last five years – before returning to Salem, Va., for the title game.

While UW-Whitewater was tested a couple times in the postseason, nothing was going to stop this team from a national title – not even Mother Nature.

Donovan, the WIAC Player of the Year, wasn’t about to let the snowstorm that swept through the entire state of Virginia and the East Coast ruin the team’s perfect season.

“Everything happens for a reason,” Donovan said about how the snow forced the game to be pushed back five hours.

Leipold saw this as a good omen since the last time the ’Hawks played an evening game at the Stagg Bowl was when they brought home a national title two years ago.

It sure did, as the ’Hawks jumped all over Mount Union from the very beginning and made the crucial plays when they counted most in the fourth quarter and ruined the Purple Raiders’ opportunity to repeat as champions.

Former UW-Whitewater head coach Forrest Perkins could not have been more elated at the team’s pep rally, one day after the title game.

“When I first met this football team I knew we had something special, something real and something good,” Perkins said. “And I will just always remember this team for being special.”

When asked to reflect on the title, Shumpert paused briefly and then explained that winning the national championship for the second time is something he’ll tell his grandchildren about decades from now.

“It’s one of those moments, I guess it took me a little bit,” he said. “It was one of those surreal moments, ‘Like did this just really happen.’ It has soaked in and now I’m just enjoying every minute of it.

“You couldn’t go out any better than this,” Shumpert said. “Being a senior, going 15-0 and winning a national championship. It’s unreal.”