Scavenging for some fun 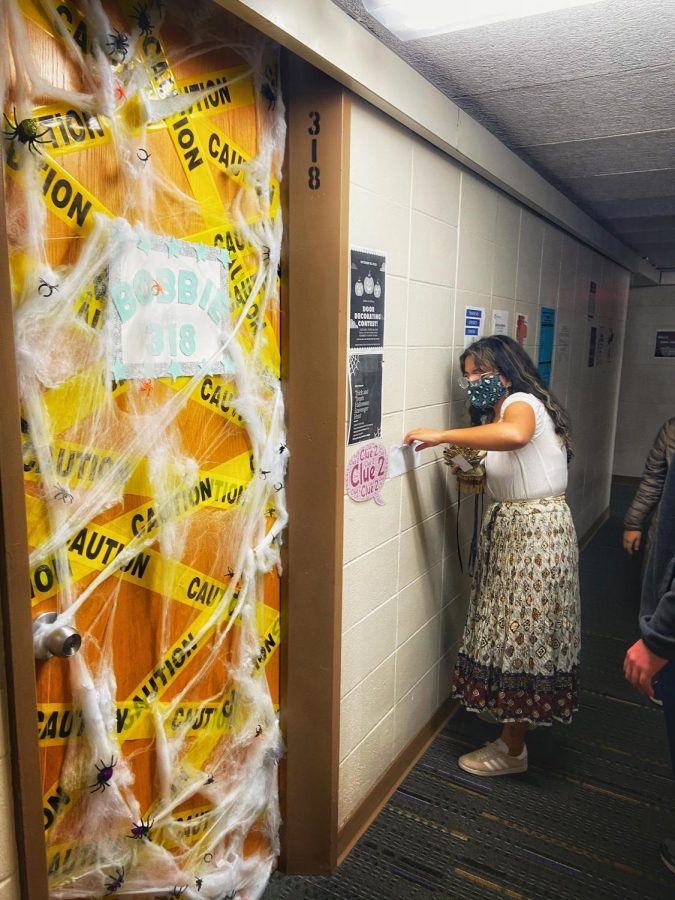 Alexa (pictured above) finds a clue within an envelope located in Knilans Hall for the Wellers & Knilans LIT Halloween Scavenger Hunt on Friday October 23.

In the spirit of the Halloween season, the Wellers/Knilans Leadership Involvement Team (LIT) hosted a program for the students living in the two residence halls called Trick and Treat Halloween Scavenger Hunt Friday, Oct. 23.

“We came up with the idea during one of our LIT Executive board meetings, and it got a pretty good response. We wanted an idea that got students out of their dorms and working together to achieve a goal. When we started working on it, it really started to take shape. We realized this could be an entertaining event to have,” said LIT Programming Coordinator Daniel Davern.

Participants voyaged through Wellers and Knilans Halls in search of clues that would eventually take them to their final destination within the scavenger hunt.

“All participants had to start in the Knilans Hall lobby and it led them on an adventure throughout Wellers and Knilans Hall. It’s enjoyable with hidden jokes and clever riddles,” said LIT Programming Coordinator Bobbie Lee.

The hunt had students racing down hallways, through common rooms and outside around the residence halls.

“There were two clues hidden outside. One outside of Wellers and one outside of Knilans. The scavenger hunt had players going back and forth between both halls,” said Davern.

In homage of the holiday, the hidden clues and decorations were themed for Halloween. The program coordinators also incorporated their rooms as a stop for the scavenger hunt.

The program also encouraged participants to dress up in Halloween costumes to create a more festive atmosphere while partaking in the scavenger hunt.

“I looked forward to seeing everyone having a good time with their friends, getting out there. and getting dressed up in costumes, but the biggest part was we wanted people to have fun,” said LIT Secretary Amanda Patrick.

When participants had completed the scavenger hunt and arrived at the journey’s end, they met the program coordinators for a prize after completing their journey.

“The scavenger hunt ended at Jitters so students would be able to know where it is and maybe stop by next time it’s open. We had a table outside with a LIT member handing out the prizes. We handed out more if players were dressed up,” said Davern.

The Leadership Involvement Team is an organization within each of the on-campus residence halls that helps put on programs for the residents in those halls. LIT also handles any concerns that the residents may have pertaining to their on-campus housing.