Looking for a shot 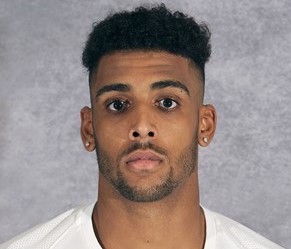 Sophomore Trevon Chislom is aiming to be a key part of the Whitewater Men’s Basketball team this upcoming season. The six foot, six inches forward played high school basketball at McFarland High School where he was named first team all-conference twice and also honorable state mention.
Chislom learned a lot in his first year as a Warhawk, saying the transition from high school to college wasn’t too challenging, but that he had to adapt to changes while continuing to grow as a player.
“The pace of the game at this level was just faster because of there being a shot clock. The movements and footwork I’m doing at this level are much more technical,” Chislom said. “I was a post player last year, and I had to be a lot more technical in how I created in the post, which I didn’t really have to worry about too much in high school.”
As a freshman, Chislom appeared in 25 games, averaged about nine points, four rebounds and played about 20 minutes per game. He’s eager for the season to start, and hopes he can continue to have a positive impact on the team going forward.
The season would normally be underway in a few weeks, but is delayed until at least January due to the pandemic. Chislom and his team are prepared though, and he knows the practice will pay off when the time comes to step onto the court for a game this winter.
Over the summer, Chislom took it upon himself to make sure he stayed in shape and in good form because there weren’t any summer workouts or camps.
“I was playing a lot outside just trying to get my game right. Also with it being so hot, it was a good time to get some conditioning in and it has put me in a good spot,” said Chrislom. “With all the drills we’re doing, I think at this point I’m ahead of the curve because of all the work I put in this past summer.”
The team is running drills and conditioning practices ahead of the hopeful season start. To avoid too much contact, they’ve been split up into small groups without contact drills and scrimmages.
Last year the team finished with a 7-18 record, and they underachieved the goals they had set.
“Our work ethic showed on the court, and most of the games we’d be up in. Then the other team would make a run, and our mindset got the best of us and really let us down,” he said.
But Chisolm has high expectations for the upcoming season from what he’s seen on and off the court among his team members.
“I feel like this year it’s a way different work ethic and we have a group of people who are willing to learn, and buy into our concepts. So I’m confident with who we have on the team,” he said. “With all the work we’ve been putting in so far, I’m hoping that we’re one of the best teams in the conference.”