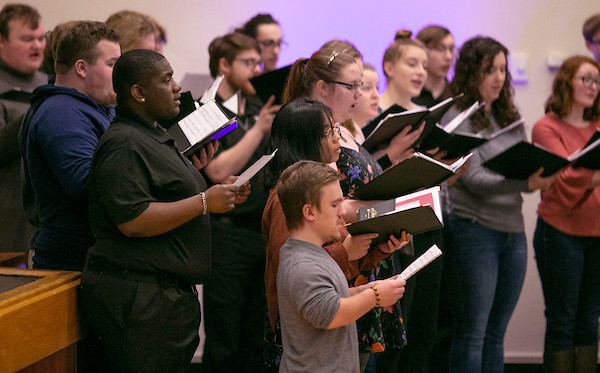 This semester, UW-Whiterwater’s choral program’s staff introduced a diversity requirement into their student’s repertoire. It was beyond their traditional canon of Italian, Spanish, German and English. It also helped them explore a wider range of languages, cultural heritages, and voices.

“They are required to practice at least one piece by a diverse composer like racial, gender, sexuality and the LGBTQIA+ community. This holds our music accountable for students to learn about history. This way they can find a new love and passion. Currently, theater major Jamie Love is practicing a song from an ally of the LGBTQIA+ community, whose name is Joriah Kwamé, an African American composer,” said associate voice professor Dr. Adam J. Shelton.

When students sang songs from diverse composer’s, they could bring their lyrics alive. Through Joriah Kwamé’s song, “Little Miss Perfect (right out loud)” it exposed them to artists that were mistreated in their past. In Kwamé’s most famous song, he sang,“I notice how she looks at me. But I pretend that I don’t see” and had this chance because of Marian Andersen, an African American opera singer.

“They refused to allow her use of the hall…because she was Black and there was a white-artist-only clause printed in every contract issued by the DAR (Daughters of the American Revolution),” said associate lecturer of voice studio, Dr. Jessica Schwefel.

In the past, singers like Andersen couldn’t perform at Constitution Hall, because they were Black, but she didn’t let that stop her. On high, she sang, “Of thee we sing” outside in a desegregated area where everyone could hear her voice. And thanks to women like her, famous composers like Duke Ellington, Rosephehanye Powell and William Grant weren’t silent anymore.

“This gives students the opportunity to research outside of the traditional cannon. So pieces composed by people who identify as women, and a lot of people neglected by the traditional canon. It’s really a wide range of people open-ended so people can seek out composers that are meaningful to them. This way that can support these works of underrepresented communities, and create more visibility,” said assistant music director Dr. Rachel Wood.

The choral department wanted students to empathize with people of color, cultural heritages that aren’t well represented, and other languages beyond German, French, Italian, English and Spanish. This way, students can learn about different perspectives, traditions and injustice issues around the world.

“Many schools around the world, across campus and everybody have considered this. These are really important issues that we all have a responsibility too,” said Wood. “Considering the role we play in equity and diversity it starts with the content we started here.