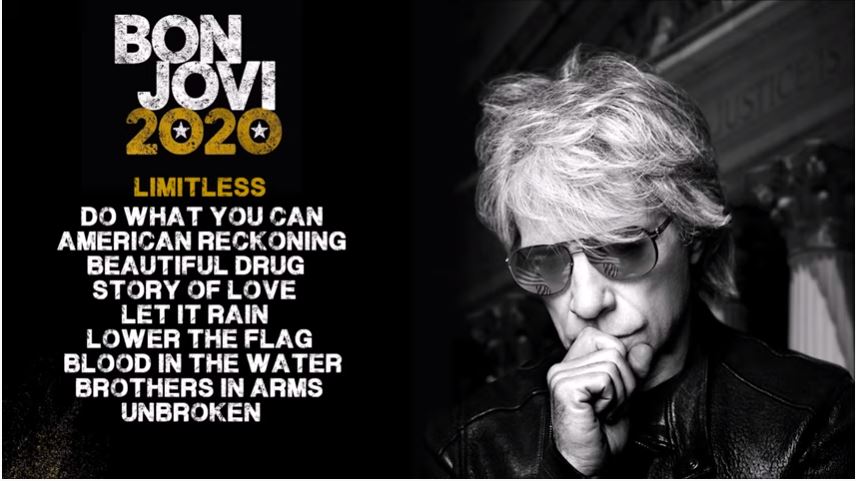 In Bon Jovi’s new album, he sings about the pandemic and how it impacted America.

Bon Jovi (John Bongiovi) is a famous rocker from the 1980’s producing hit albums like Runaway, Livin’ on a Prayer and Keep the Faith. In 2018, he and his band were inducted into the Rock n’ Roll Hall of Fame. Now, at age 58 he produced his 15th album in honor of this historic year.

In the past, Bon Jovi never really produced any albums explicitly related to societal issues, but in a year plagued by racial injustice and well – a plague – he got his chance. Oct. 2 Bon Jovi and drummer Torrey Torres released their new album called Bon Jovi 2020.

In the album Bon Jovi steps away from typical party rock music, like in his country single American Reckoning. In this song, he speaks of truth and what is happening during the pandemic.

He deeply sings, “Her conscience has been looted, and her soul is under siege,” bringing his experience and perspective to the world.

Similarly, in his song Unbroken, he sings about how Covid-19 was just the beginning of a tumultuous year with racial violence wrecking innocent families.

“It was shine a light, three little words written across the chest of a 12-year-old who hasn’t lived life yet. Am I next? Am I next?”

Families of color are scared and worried that their children could be the next target. Would these young children remember America this way?

Families prayed who never did before.

“God of light, seek your children from this life. Hear these words, his humble plea, for I have seen the suffering. With this prayer I am holding, that we can be unbroken. He won’t forget. You choose to remember, choose to forget.” Sings Bon Jovi about America’s only hope, “In God we trust,” recovering because of this holy light.

In his album, Bon Jovi gives hope to those who are suffering, without jobs, running out of food stamps and rationing their lives in various ways. Specifically, in his song Do What You Can, he sang about the helpless.

“When you can’t do what you do, you do what you can, help we all understand. And it brought everyone together, it impacted families who were barely surviving, and were laid off work with no pay, round here we bend don’t break.”

No matter what, families still support each other and they help those that need love in these trying times. They don’t break, but instead take each opportunity to help: doctors, nurses, truckers, package deliverers and grocery store clerks to name a few. Everyone needs a hug, so love your family and your neighbor because everyone is in this together.

In his last song Let it Rain, he acknowledges the pain and lives ripped from these families.

“The protests in the street, in the media from out of town. Well chew it up and spit it out, and dwell, move onto the next one. Before we even grieve, someone’s husband kissed the cross, that bears his Margie’s name, and promises he’ll see her once again. Won’t see her children grow, won’t see their love grow old. Last night their dream became a nightmare and their nightmare has no end.”

It was as if there was no end. There was no time to grieve, because people grew with rage. There was hatred in the air, and no one could be saved. Never forget about love, because that’s what keeps America sane. It’s not the police, the doctors, or the laborers that kept the world healthy, it’s the love that keeps everyone happy. Overall, Bon Jovi wants everyone to love one another, and understand that society won’t get through this without it.

To learn more about Bon Jovi 2020, sample his album at https://www.youtube.com/playlist?list=PLfiMjLyNWxeakaj6oQb3JJu7YFuxPhBAr.