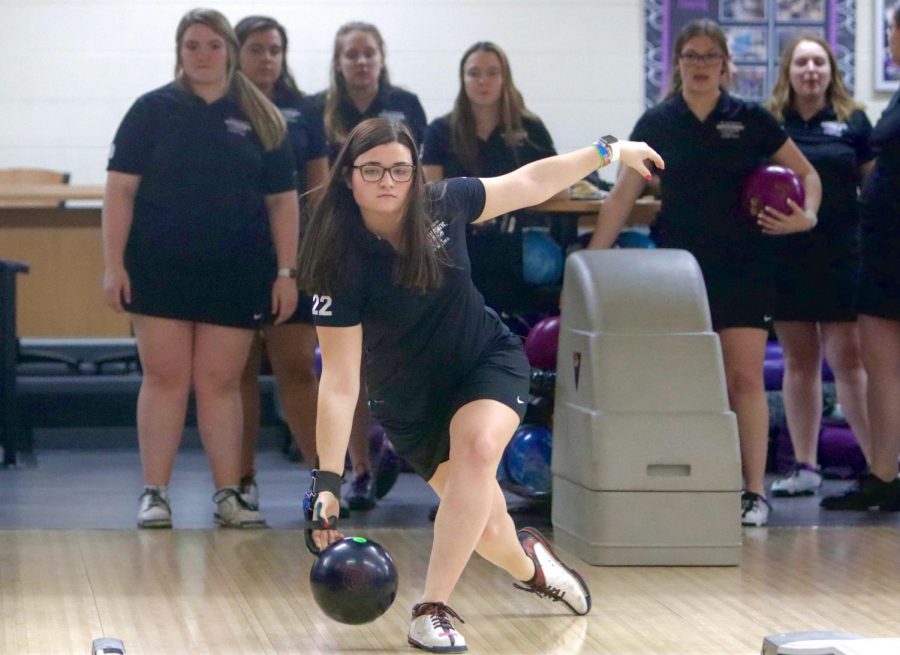 Two-year co-captain Peyton Attig has had an admiring career bowling for the University of Wisconsin-Whitewater’s bowling team. She has received numerous awards such as two top ten individual finishes in tournaments, Subway Athlete of the Week, and she is a three time WIAC Scholastic Honor Roll recipient. With all that hard work and determination, she has come to realize that bowling plays a huge roll in her life and she plans to continue her career for as long as she can.

When did you start bowling and what made you realize that it was the career you wanted to pursue?

I didn’t start bowling at a young age like many people who I am friends with did.  I got a bit of a late start and didn’t pursue bowling until my freshman year of high school.  My younger brother had been bowling for a couple of years so I thought I would give it a try.  I made the team my freshman year, and the rest is history.  It was something I was naturally good at, so I absolutely fell in love with the sport and I knew it was what I wanted to devote my time and effort to.

Why did you choose whitewater for bowling?

I chose to bowl at Whitewater for a couple of reasons.  The first reason was the beautiful campus and amazing academic opportunities.  I believe that we are students first and athletes second and I wanted to make sure I was attending a school that I loved outside of my time spent bowling.  I also chose to bowl at Whitewater because I felt very welcomed by the team on my visit and I knew I wanted to compete for a nationally ranked NCAA program.  Also, many people don’t realize how amazing of an opportunity it is to have bowling lanes on campus and this definitely sealed the deal for me!

What is the highest score you’ve bowled and how did you feel afterwards?

The highest score I have ever bowled is a perfect 300 game.  This was not in a tournament, but was during practice my sophomore year. After I finished the game I was like “wow I just threw 12 strikes in a row”.  In a tournament the highest baker game that I have been part of was during our home tournament in 2018 and the five girls bowling shot a 279!  This is the 3rd highest baker game in our team history and it was such a fun thing to be part of.  After we finished the game we were all on cloud nine because we couldn’t believe what we had just accomplished!

Out of all the awards you’ve won, what’s your favorite?

This may sound super nerdy, but I think out of all of my awards and accomplishments, my favorite is probably being a three time NTCA and NCBCA Academic All American.  These awards mean a lot to me because it means that my hard work outside of the bowling alley and inside of the classroom is paying off.  Being a student-athlete is not easy and is incredibly time consuming, so these awards are a nice reminder that I am doing a good job in what I do regardless of how tired I may be.

What’s your favorite memory of being a part of the bowling team at UW-Whitewater?

My favorite memory on this team is winning the Warhawk Open last December.  It was such an awesome experience to climb our way through match play on Sunday to the tournament win.  We had awesome team chemistry the entire weekend and everything was going our way.  This win was also very special for me because before we competed that Sunday morning I had learned that my grandpa had passed away the evening before.  This win is super special to me and I have it dedicated to him.

Do you think you’ll take bowling even farther and maybe become a professional?

I do see bowling being a big part of my future, but I don’t necessarily know if I will be a full-time professional.  I think it would be an awesome opportunity to bowl a couple of the PWBA tour stops, and it is a dream of mine to do it, just not full time.  I love my future career path of being a special educator so I don’t think I would give that up.  The great thing about bowling is you can continue to pursue it at the level of competition that you desire.

Due to covid I know things are a bit crazy and confusing, but does the bowling team have a plan for next semester?

As of right now our team’s plan for the second semester is to travel and compete.  We do have a schedule lined up that if we are granted permission to travel we will have tournaments to compete in.  However, we do understand that things change and cannot always go the way we want, and that health and safety is a number one priority.  I do hope we do have some type of chance to compete since this is my final season as a Warhawk.