Leading on and off the tennis court 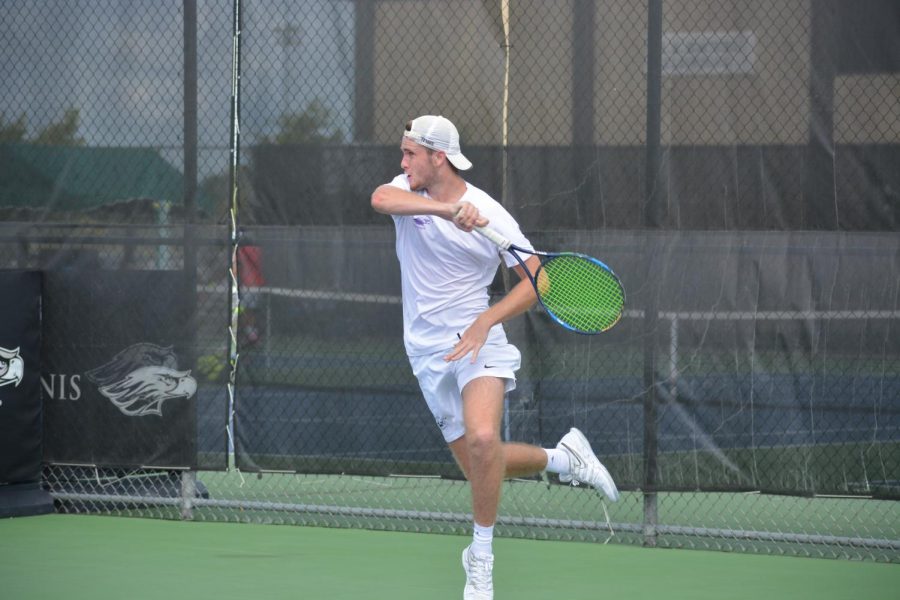 Alex Gray, a junior and captain of the men’s tennis team continues to set an example for student athletes both on and off the court. Gray excels in the classroom and in the game, earning multiple conference academic awards. While playing singles his freshman year, he had the ninth most wins in a season in the program’s history. Gray continues to help the team stay together in an unusual offseason and will be ready when the time comes for competition. A very humble student, Gray sets an example for how young athletes should look to carry themselves.

How have you handled being a captain for this team, with all the difficulties of Covid?

I would say the biggest part since we are not playing right now is working on team chemistry, so then when we have our season in the spring we are a close group of guys which will help us play better come season. That’s the biggest thing also is having fun outside of practice and getting to know each other better and to get to know the freshman. Then in our practices try to push everyone and set goals to push each other against one another.

I see you have received multiple academic awards while still playing tennis here at UW-Whitewater, how have you maintained being a great student while also being an athlete?

I would definitely speak that to our team’s GPA of both guys and girls which is really high. We always push each other to make sure we are prepared for exams or tests, or if someone isn’t doing their homework and their grades are slipping, then holding each other accountable. I would then definitely say any academic success I have had here has to largely be due to the team and environment we have here. We emphasize to make school first, tennis second but to take both very seriously.

You have racked up a very good win loss record in singles in your time here so far at UW-Whitewater, what have you done in the offseason to maintain that level of play hopefully this upcoming season?

We have been practicing a lot and hanging out a lot. As what we are trying to do as a team is to really push each other, which is what’s going to get us ready. Also pretending the matches against each other are real matches, so taking everything very seriously even though it is a while before we have an official match it will help us pay off during the season.

Do you have preference playing singles or doubles more, since you are fairly good at both?

Are there any players people should keep their eye on for the upcoming season, any up and comers?

I mean this year we have a really good freshman class, I would say all of them are up and comers who could break into singles or doubles lineups. As upperclassmen we all know we have to watch out for them, as we have seen them play and it does it really help push us on a daily basis. We can’t be slacking at all if we want to lose our spots in the lineups, so just look out for our whole freshman class because they are really good.

What will define the team’s season this year if it is played?

I would say chemistry because this season is not going to be a normal season, in the spring semester as it isn’t our typical schedule. Spring break is also going to be different, so if you have a group of guys that aren’t on the same page or don’t get along it will really affect the team. Though if you have a group of guys that get along and are close together who have great team chemistry, I think easily we would be able to face any type of adversity in the spring season if it comes.