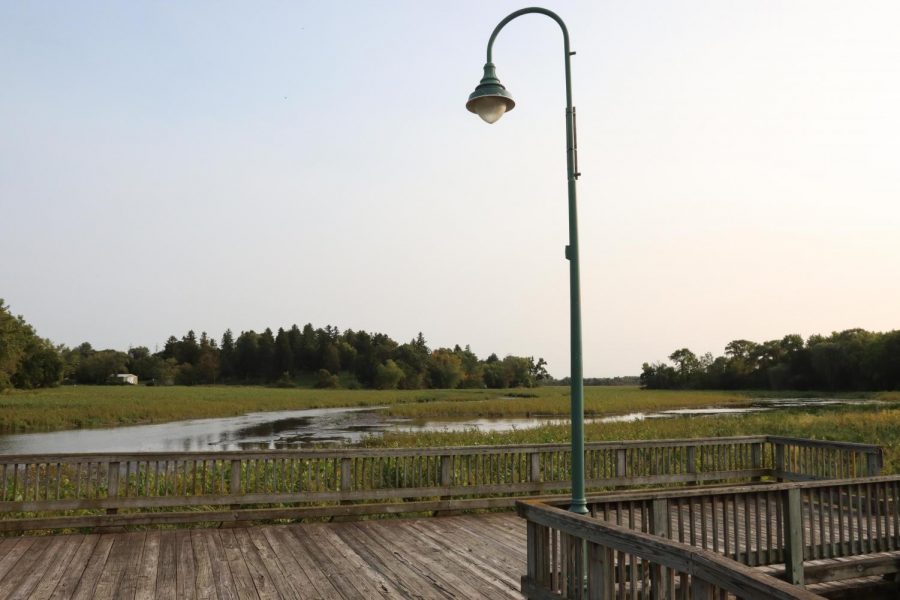 The drawdown of Cravath Lake will freeze invasive plants this winter so that they won't return come spring.

Whitewater residents remember a time of beaches near the dam of Tripp Lake, along with a small floating dock accompanied by a slide. These same residents remember that the lake was also deep enough to dive into near the dam because a local business owner would pay to have an excavator clean out the sediment buildup. But that sediment had not been cleared away in nearly 70 years and the lakes need rejuvenation. The current lake drawdown project aims to bring life back to Whitewater’s Tripp and Cravath lakes – human, animal and plant alike.

“One of the goals of the drawdown is to freeze out aquatic plants that concentrate their reproduction on asexual means. The two aquatic plants in Tripp and Cravath that are rather dominant are Eurasian Water Milfoil and Coontail,” said Department of Natural Resources lakes biologist Heidi Bunk. “Coontail is growing in such abundance that navigation is often impaired and it is preventing other native aquatic plants from becoming established.”

Another goal of the drawdown is to stimulate the growth of aquatic plants that concentrate their reproduction on seed production, such as native pondweeds.  According to Bunk, this is accomplished by drying lake sediments and causing cracking in the sediment over the winter, which allows surface air to get further down into sediment.

“Over time our lakes, like many others in the area, have seen an increase in the number of non-native or invasive aquatic plants. By draining the lakes and allowing the lake bed to sit uncovered for one or more winter seasons, we hope to freeze out the invasive plants, leaving room for our native plant life to thrive,” said City Manager Cameron Clapper.

The city has two main goals for the current project: One is to create a cleaner body of water that is free of invasive aquatic plant species. The other is to increase the lake depth so that both lakes are more navigable and accessible for a wider range of patrons.

However, the draining process was delayed due to a few unexpected discoveries. Rock walls were found near the railroad bridge on Cravath Lake, which inhibited a complete drain. Natural springs at the southern end of Tripp Lake prevented uncovering the lake bed in that area.

According to Clapper, the majority of residents are in approval of this project, and have been waiting a long time for something like this to happen. Citizens want the project done right, and are willing to be patient in order for that to happen.

“Long-term project success depends on what we do upstream. In order to get the most out of our efforts and make sure we don’t have to do this again in the next decade we will need to help reduce streambank erosion upstream and thus reduce the amount of sediment flowing into the lakes,” said Clapper.

Parks & Recreation Director and project lead Eric Boettcher has been working extensively with his team and the Department of Natural Resources (DNR). They’ve come to the conclusion that if they keep the lake drawn down another year, it will be environmentally beneficial to the lake.

Working alongside the DNR, the drawdown crew needs to drain the lakes at speeds slow enough so that the fish population is not hurt by the project. Draining the lakes is also leading to slightly murkier waters, but the DNR states that it is “not a concern, and the increase of sediment is not enough to negatively impact anything.”

“Our plan is to keep the lakes drawn down through the winter and see where we are in the spring,” said Boettcher. “then we’ll look at the potential of dredging in the summer of 2021.”